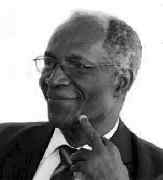 Daniel Akyeampong was the son of Peter Napoleon Akyeampong and Charity Afful. He was the youngest of his parents' children, born in the coastal town of Senya Beraku about 80 km from Accra. At the age of six, Daniel entered the Senya Beraku Local Council School in 1945. He attended this school for eight years completing his primary education in 1953.

In 1954 Akyeampong began his studied at Mfantsipim School in Cape Coast, Ghana. This school was founded in 1876 by the Methodist Missionary Society as the Wesleyan High School. It was named the Mfantsipim School in 1905 when it merged with another school. It was founded as a boys' boarding school and it has remained this type of school. When Akyeampong entered the school it had moved to a location on Kwabotwe Hill and the headmaster was Francis Lodwic Bartels, the first black headmaster and, rather significantly, he had himself been a pupil at the school. The boarding school had seven dormitories and Akyeampong lived in Balmer-Acquah, the first of the seven dormitories to be built. His abilities were recognised at this stage and he missed a year, going straight into Form 2. He graduated in 1959 as the Best Student in Physical Sciences and Mathematics. Let us note that, in the middle of the five years that he spent at this school, Ghana gained independence from Britain on 6 March 1957. The school had an "Old Boys Association" called MOBA, the Mfantsipim Old Boys Association. Akyeampong's MOBA57 year group became a second family to him.

In October 1963 he entered the Imperial College of Science and Technology, London, initially to take the diploma coursework in mathematical physics before starting on his Ph.D. studies. However this turned out rather differently to what he expected as he related in [1]:-

Professor Abdus Salam taught the class in group theory. His lectures were very popular and one had to go early to find a seat. Following my successful completion of the coursework in the summer of 1964, he invited me to his office one day, and told me about a new international centre for theoretical physics to be established in Trieste, Italy, which he was going to direct in the autumn of the same year, and the reason why he expected me to join him there. That was how in October 1964, Jimmy Boyce, Ray Rivers and myself became the first postgraduate students of Salam in Trieste, and so had the honour of joining the post doctoral colleagues Bob Delbourgo and John Strathdee to become members of the group that was christened by Ms Jean Bouckley and Ms Miriam Lewis as "the Salam Boys".

In the same article, Akyeampong wrote about the research environment in the International Centre for Theoretical Physics, Trieste, where he became one of the first Fellows in 1964-65 [1]:-

Salam worked hard to get the Centre known world-wide and we were naturally infected by his ceaseless dedication. We had our lunches together at the Mensa dei Ferrovieri with him at the table head, John and Ray at one side of the table and Bob and Jimmy on the other, with me deciding when to sit next to Ray or to Jimmy. These became physics working lunches - with paper napkins serving as writing equipment - and each session usually ended with several suggestions from Salam or Bob or John for us graduate students to pursue later. The excitement and enthusiasm Salam displayed were infectious; and later when I had the privilege to collaborate with Delbourgo, who was my unofficial supervisor, it became clear that he was indeed a chip off the old block.

We note that Abdus Salam (1926-1996) was a Pakistani theoretical physicist who was awarded the 1979 Nobel Prize in Physics for his contributions to the electroweak unification theory. For Akyeampong's assessment of what Abdus Salam and the International Centre for Theoretical Physics, Trieste, contributed to science in Africa, see THIS LINK.

While he was a research student, Akyeampong began publishing high quality papers. Here are a few examples of the papers he published around this time: The scalar behavior of vector electrodynamics at high energy (1964), The scalar behaviour of charged vector meson theory at high energy (1965), Baryon octet scattering in U (12) (1965), Nucleon-nucleon scattering in U (12) (1965), Mass formula for U6​⊗U6​ (1966), The quark model and elastic baryon-baryon scattering (1967). These papers have his address as the International Atomic Energy Agency, International Centre for Theoretical Physics, Trieste.

Akyeampong left Trieste in September 1966 and was awarded a Ph.D. in Mathematical Physics by the University of London in October 1966 with his thesis Applications of higher symmetry groups to particle physics. As well as having Abdus Salam as an official supervisor, he also had the theoretical physicist Paul Taunton Matthews (1919-1987), based at the University of London, as an advisor. In addition to the Ph.D., Akyeampong received a DIC (Diploma of Membership of Imperial College) in Mathematical Physics in November 1966.

Returning to Ghana late in 1966, he was appointed as a Lecturer in Mathematics at the University of Ghana. He was a popular lecturer with his students who called him "Prof Akye". Soon after he started teaching there he met Charlotte Sally Newton in Volta Hall. They quickly became friends and they were married on 11 April 1970; they had two sons and one daughter, Angelo Ekow Oguah Akyeampong, Adrian Kofi Nuamah Akyeampong and Adeline Adwoa Akooley Akyeampong.

Not only was he lecturing at the University of Ghana but he was also an Associate of the International Centre for Theoretical Physics, Trieste, from 1967 to 1975, and a Senior Associate from 1976 to 1993. He explained how this came about [1]:-

When in September 1966 I went to say good-bye, I thought that was going to be the last time I would see [Abdus Salam]. However, a few months after my arrival in Ghana, I received a letter from him informing me that I had been made an associate of the Centre. As an associate, I spent three months at the Centre after nine months of teaching and research at home. I do remember very vividly the standard questions he would ask on each visit, when I showed up to report my presence. "Oh, you are here?" he would say. "How is Ghana? Have you found a place to live? Where is your office?" And then finally "What are you working on?" Then he would say "Strathdee and I have been working on this interesting problem. Why don't you see him for more details?" It was through the Associateship Scheme which was extended several times for me that I was able to maintain a close working relationship with him, and for that I shall be forever grateful.

As Pro-Vice Chancellor, he was the Chairman of the Academic Planning committee, the Estimates Committee, the Housing Committee, the Management Committee of the Housing Loan scheme, the Residence Board, the advisory Boards of all the Institutes in the University and the School of Performing Arts. He also served on several University Boards/Committees including the Inter-Faculty Committee on Regulations Governing the Bachelor's degree, just to name one.

He was active in the African Mathematical Union, and was an assistant editor of the Union's journal Afrika Matematica. He also served on the editorial board of Discovery and Innovation, a journal of African Academy of Sciences. Perhaps his most prestigious position on the world scientific stage was his a membership of the Executive Board of the International Council for Science, Paris, France, from 1993 to 1999, becoming elected its Vice President from 1996 to 1999. He was also elected to the Mathematical Sciences Section of the World Academy of Sciences in 1991. His election was based on his exceptional contributions to theoretical physics, symmetry groups in physics, and grand unified theories.

In addition to publishing 26 papers in leading journals and conference proceedings, he also published the book The Two Cultures Revisited: Interactions of Science and Culture, which was the text of his 25th J B Danquah Memorial Lecture published by the Ghana Academy of Arts and Sciences.

To understand something of his character, we quote from [2]:-

Professor Akyeampong was a man of principle! He was strict but fair in all he did. To some, he may have looked unapproachable but once you got to know him, you would discover that he was one with an unparalleled sense of humour, witty, fun loving and a loud infectious laughter. This jovial personality was a constant when he was with family, friends and his "world famous" MOBA 57 group. Professor Akyeampong was a devoted family man. To his three children, he imparted discipline, integrity, love and respect for all and a desire for knowledge - and Maths and Science! He would always supervise their Maths homework and would continually repeat, "My dear friend, Mathematics is the easiest subject in the world". Whether they believed that or not, was another story. His love for his wife was legendary. To sum it up in one sentence - she was his best friend and Ewuraba Sarah, as he affectionately called her, was his partner for life. They were blessed with 45 years of marital bliss.

Akyeampong broke a femur on Sunday 21 December 2014 and was admitted to Korle Bu hospital in Accra for surgery. All seemed to go well and he was back home for the 2015 New Year celebrations. On 24 January 2015, however, he suffered a septic shock and was readmitted to Korle Bu hospital. After six weeks in the hospital, he died at the age of 76.
Other Mathematicians born in Ghana

Other pages about Daniel Akyeampong:

Other websites about Daniel Akyeampong: