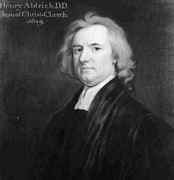 Henry Aldrich's parents were Judith Francis and Captain Henry Aldrich. Captain Aldrich served the Berkeley family for many years, in particular he served John Berkeley who became commissioner of the navy. Henry was born in Westminster, an inner borough of London, lying on the north bank of the River Thames. He was the eldest of his parents sons. He attended school in Westminster and was awarded a scholarship in 1658.

On 19 July 1662 Aldrich entered Christ Church, Oxford, see [2]. He was awarded his M.A. in 1666 and his M.A. in the following year, then became a tutor at Christ Church. He had wide interests including mathematics, music, and architecture. He was well known as a humorist and Suttle [3] describes him as:-

In 1674 he published Elementa geometricae which led to him being described by his Christ Church colleagues as [3]:-

... a great mathematician of our house.

He was interested in ecclesiastical affairs and on 4 February 1682 he was appointed as a canon at Christ Church. He was awarded the divinity degrees of B.D. and D.D. a couple of weeks later. The Oxford Philosophical Society was founded in October 1683, and Aldrich was a founder member giving a lecture at the first meeting of the Society. He sang in the Christ Church Cathedral choir and organised weekly music meetings associated with the choir but covered a much wider range of musical activities and styles [1]:-

The gatherings were remembered for their conviviality; Aldrich was a renowned drinker and pipe smoker. He was 'a highly competent composer' ...

Although Aldrich was a natural choice to take over as Dean of Christ Church when the position fell vacant in 1686, the king appointed a Roman Catholic to the position for religious reasons. However after the revolution of 1688 such things changed dramatically and Aldrich was appointed dean in April 1689.

In 1691 he published Artis logicae compendium a treatise on logic which was to be the main text on the topic for 150 years in England. Even when Richard Whately published Elements of logic in 1826 it still took Aldrich's work as his starting point, but then this much more modern text took over the role which Artis logicae compendium had held for so long; see [4] for further details.

For three years, from 4 October 1692, Aldrich was vice-chancellor of Oxford University. He composed music to be used in university ceremonies and also experimented with using movable type to print music. We mentioned above his interest in architecture and we should mention that he supervised the repair of St Mary's Church, Oxford, in 1675 and 1676. Handley writes [1]:-

He was probably the original architect of All Saints' Church, Oxford, constructed between 1701 and 1710, and was certainly the designer of the Peckwater quadrangle in Christ Church, begun in 1706 but not finished until 1714, after Aldrich's death.

He took ill in November 1707 but recovered well enough to carry on his duties. However, when his health deteriorated in 1710 he went to London to seek treatment and it was while he was in London that he died. He was buried in Christ Church on 22 December.
Other Mathematicians born in England
A Poster of Henry Aldrich

Other websites about Henry Aldrich: