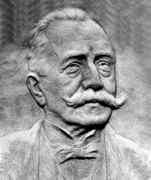 Cesare Arzelà came from a family of limited financial means. He attended the Gymnasium in Sarzana for the two years 1856-58. Sarzana is a town about 8 km south of Santo Stefano di Magra (the town of his birth) and about the same distance east of the coastal town of La Spezia. From there he went to the Lyceum in Pisa, where he spent the three years 1858-61. Having won an entrance competition for the Scuola Normale Superiore of Pisa which gave him a scholarship, he began his studies there as a student of mathematical and physical sciences in November 1861. We note that this was a period of transition for education in Italy, with the newly unified country taking over the regulation of colleges and many changes occurred during Arzelà's four years of study. He also studied at the University of Pisa and his thesis was directed by Enrico Betti who held the chair of analysis and higher geometry at the University of Pisa. Betti was also director of its teacher's college which Arzelà was attending, the Scuola Normale Superiore, from 1864. In 1869 Arzelà graduated having completed work on his dissertation on potential theory.

After graduating, Arzelà continued to attend courses in higher analysis, mathematical physics, and higher mechanics while continuing to work for the certificate from the Scuola Normale Superiore which would allow him to become a secondary school teacher. He was awarded the certificate in July 1870 and, in September of that year, he began his teaching career at the Lyceum of Macerata. He published Sopra alcune applicazioni di una formula data da Jacobi Ⓣ in 1871. After working for two years in Macerata, he applied for leave of absence so that he might continue his studies in Pisa. He returned to Pisa for the academic year 1872-73, attending a course on elasticity given by Betti and a course on the theory of functions of a real variable given by Ulisse Dini. During this year [6]:-

Arzelà wrote an elegant paper on the deformation of an elastic ellipsoid and solved an important problem on the study of the elastic deformation of the earth.

The title of this paper was Deformatione di un' ellissoide omogene elastico isotropo Ⓣ. He also published Sviluppo, in serie ordinate secondo le potenze decrescenti della variabile, di n funzioni algebriche definite da altrettante equazioni a coefficienti determinati Ⓣ in 1873. Leaving Pisa after studying there for a year, Arzelà taught in Savona. He left there to take up a teaching position at the technical institute in Como then, in 1875, he went to Florence where he taught mathematics at the Instituto Tecnico. There were two students that Arzelà taught at the Instituto Tecnico in Florence who turned out to play an important role in his future. These were Rodolfo Bettazzi (1867-1941) and Vito Volterra - both became university teachers (in Volterra's case becoming a mathematician of top international importance) and went from being Arzelà's students to becoming colleagues and friends.

The University of Palermo had a vacancy for a professorship of algebra which, in the Italian tradition, was filled by asking people to compete for the post. Arzelà came out on top and took up the position in 1878. During the years that Arzelà had been working his way towards a university post he had been making use of his teaching experiences writing a textbook. He published Trattato di algebra elementare ad uso dei licei Ⓣ in 1880 seven years after beginning to collect material. He had also worked on the theory of equations publishing the paper Sopra la teoria dell' eliminazione algebraica x Ⓣ in 1877. Arzelà only taught at Palermo for two years for, having entered a competition for a professorship at the University of Bologna, he was appointed as professor of Infinitesimal Calculus in 1880. In 1884 he became a full professor at Bologna when he was appointed to the Chair of Higher Analysis. Salvatore Pincherle was appointed as a professor at the University of Bologna in 1881 so the department was greatly strengthened by these appointments and it was only due to them that Bologna could award degrees in mathematics [6]:-

During the 1870s, students at Bologna could not obtain a degree in mathematics because of the lack of professors capable of teaching the high-level courses of the last two years of the curriculum. Beginning in 1881, students could finally complete these studies and earn their degrees in mathematics. This change resulted from the addition of excellent professors to the faculty with the express objective of bringing Bologna's mathematics teaching up to international standards.

The two new professors undertook research in analysis, Arzelà concentrating on the theory of functions of a real variable while Pincherle concentrated on analytic functions using the approach by Weierstrass [6]:-

Arzelà did his most important scientific work during his Bolognese period. He elaborated the concept of stepwise uniform convergence which gives a necessary and sufficient condition for a series of continuous functions to converge to a continuous function (1883), and he proved the term-wise integration theorem for a series of functions using the Riemann integral (1885).

In fact he published three papers in 1885: Sulla integrazione per serie Ⓣ; Sulla integrabilità di una serie di funzioni Ⓣ; and Sui prodotti infiniti Ⓣ. It was four years later that he published the result for which he is best known today in his paper Sulle funzioni di linee Ⓣ (1895). He proved the result now known as the Ascoli-Arzelà theorem on the existence of a uniformly convergent subsequence in every sequence of equilimited and equicontinuous functions. Both Giulio Ascoli and Arzelà had studied the concept of equicontinuity and Arzelà's theorem was a generalisation of a much weaker one which had been proved by Ascoli in 1884. Veronica Gavagna gives details in [5] of some of the 96 letters which Arzelà wrote to Volterra over a 30-year period. These give interesting information about Arzelà's research, and in particular his research in functional analysis which the two mathematicians refer to as "functions of lines" in their correspondence. Notice the title of Arzelà's paper Sulle funzioni di linee Ⓣ in which the Ascoli-Arzelà theorem appears. Also in this 1895 paper Arzelà expressed the hope that he would be able to apply his results to justify the Dirichlet principle. In fact in the following year (1886) he published his attempts to use his theorem to prove the Dirichlet principle which he achieved but only by having imposed some extra conditions. Notice that today the Ascoli-Arzelà theorem is a result about compactness but this idea was only introduced by Maurice Fréchet in 1904.

The interesting papers [6] and [7] by Laura Martini, discuss a course on Galois theory given by Arzelà at the University of Bologna in session 1886-87. This course was attended by Ettore Bortolotti and the notes he took have survived. This course by Arzelà was the first course on Galois theory to be given in Italy. It is interesting to see the material on which Arzelà based his course: Lejeune Dirichlet's Vorlensungen über Zahlentheorie Ⓣ; Joseph Serret's Cours d'algèbre supérieure Ⓣ, Camille Jordan's Traité des substitutions Ⓣ and Eugen Netto's Substitutionentheorie Ⓣ. The book by Netto clearly had clearly made the biggest impression on Arzelà who [6]:-

... assessed the various presentations; he chose what he viewed as the best of the best; he altered and elaborated on those presentations in full knowledge of the needs of his student auditors. In so doing, he succeeded brilliantly in organizing a cogent and pedagogically sound course of lectures that at the same time reflected his own understanding of the algebraic subject matter.

In the year long course of lectures Arzelà proved that equations of degree greater than four cannot be solved by radicals. Rather surprisingly, after giving the proof he writes "this proof was given for the first time by Ruffini". Since details of Ruffini's proofs were not widely known or available when Arzelà gave his course, Martini is led to conclude [7]:-

It is possible that Arzelà had read Ruffini's first proof which, after all, had been published privately in Bologna and which was well-known to several of Ruffini's Italian contemporaries in mathematics.

We mentioned above Arzelà's school text which he wrote in 1880 but this is not the only school or undergraduate text he wrote [6]:-

... in 1880, Arzelà had written one of the most widely used secondary school texts. His 'Trattato di algebra elementare' Ⓣ went into many editions and was extensively utilized as a textbook for almost 30 years. He also wrote 'Complementi di algebra elementare' Ⓣ (1896) and (with G Ingrami) 'Aritmetica razionale' Ⓣ (1894) for the secondary school audience in addition to the university-level text, 'Lezioni di calcolo infinitesimale' Ⓣ (1901-06), which encompasses the lectures on infinitesimal calculus given at the University of Bologna beginning in the academic year 1880-1881. Arzelà thus commands an important position in the history of the teaching of mathematics in Italy both at the secondary and at the university level.

Notice that Lezioni di calcolo infinitesimale Ⓣ was a two-volume work, the first of the volumes appearing in 1901 and the second in 1906. All the teaching texts by Arzelà are discussed in [4].

We have mentioned that Salvatore Pincherle was a colleague of Arzelà's at the University of Bologna but we should also mention that Federigo Enriques became a colleague in 1896. Among the students that Arzelà taught at Bologna who became leading mathematicians, in addition to Bortolotti who we mentioned above, we should add the names of Leonida Tonelli and Giuseppe Vitali.

Other websites about Cesare Arzelà: