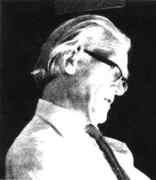 ... appears to have been a man of intelligence with real, if untutored, mathematical talent, and was adept to finding ingenious solutions to puzzles.

Having trained as a pharmacist, Walter registered with the Pharmaceutical Society of Northern Ireland in 1890. He moved to Omagh in 1909 where he opened a chemist shop. In the April 1911 Census he gave his address as The Pharmacy, High Street, Omagh. On 20 June 1911 he married Mary Olive (Molly) Shera at Clogherny Parish Church. The ceremony was performed by the Rev Dr Hunter. Molly Shera was the only daughter of David and Margaret Shera, The Glebe, Dunmoyle, Sixmilecross, County Tyrone. David Shera was Land Agent for Lord Justice Ross. Walter and Mary Bates had four children, the youngest being David Bates, the subject of this biography. Only one of his three older siblings survived beyond being a baby, namely Margaret (Peggy) Bates.

David and his older sister Margaret attended Miss Quigly's school in Omagh. This school only had one room, the front room of Miss Quigly's house, in which all the children were taught. Realising that David required better educational prospects than Omagh could offer, his parents decided to make a considerable sacrifice. His mother Molly, together with the two children Margaret and David, moved to Belfast when David was nine years old so that he could have a better education. His father remained in Omagh where he continued to run The Pharmacy in the High Street. Bates writes in his Scientific Reminiscences [1]:-

I accepted the move thoughtlessly, not then appreciating the sacrifice made by my father who continued his business as a pharmacist in Omagh travelling to our home in Belfast twice a week.

Once in Belfast, the nine year old Bates continued his education at the Inchmarlo Preparatory School. From there, in 1929 he progressed to the Royal Belfast Academical Institution. He excelled at mathematics and science, being particularly fond of chemistry, but was criticised by his teachers for his lack of enthusiasm for organised sports. In fact the emphasise that the school put on sport meant that Bates was not happy at the school. His shy introspective nature meant that he did not fit in well and he spent many hours carrying out his own chemistry experiments in the shed at the bottom of his garden. In 1934 he won a scholarship to Queen's University, Belfast, and began his studies there later in the same year. When he matriculated in the Faculty of Science, he was still unsure whether he wanted to specialise in physics or chemistry. He began by studying mathematics, physics and chemistry but it was his physics teachers who were outstanding. He studied courses on experimental physics given by Karl George Emeleus (1901-1989) and mathematical physics delivered by Harrie Stewart Wilson Massey (1908-1983). Their excellent teaching quickly persuaded Bates to give up his notions about studying chemistry and he graduated in 1937 with a First Class degree in both Experimental Physics and Mathematical Physics.

Harrie Massey suggested that, for a Master's degree, Bates should work with his fellow student Joseph John Unwin. The thesis, Recombination in the upper atmosphere, involved much heavy computation which was shared by Bates and Unwin. These computations were carried out using a specially constructed differential analyser made by technician John Wylie. Bates was awarded an M.Sc. in 1938 and, after Richard Arthur Buckingham (1911-1994) had used different methods to check the results of the thesis, it was published in 1939, becoming Bates' first publication. In autumn 1938 Harrie Massey was appointed to the Goldschmid Chair of Applied Mathematics at University College, London and he took Bates, his most promising researcher, to University College with him. Bates registered as a Ph.D. student at University College London and worked on his thesis advised by Massey. However, when Bates was part way though the research, World War II began. He had, however, already published the paper The quantal theory of continuous absorption of radiation by various atoms in their ground states (1939). We should note that during the war Joseph Unwin became a civilian Scientific Officer with the R.A.F. and was killed in an accident while testing an airplane. We should note also that Richard Buckingham was an assistant lecturer in mathematical physics at Queen's University, Belfast who also followed Massey to University College London in late 1938.

Required to undertake war work, Massey was sent to the Admiralty Research Laboratory at Teddington to head a team trying to find ways to combat the threat of German magnetic mines which were destroying the Allies' ships. He took with him a number of young scientists from University College including Bates and Buckingham. By 1941 they had solved the problems of German mines and the team transferred to the Mine Design Department near Portsmouth to work on making mines with which to attack German ships. Bates became Chairmen of the Research Committee on Mechanical Engineering Problems. Massey later said [2]:-

... he introduced a breath of fresh air into a moribund subject of great importance for the defence effort.

Francis Crick, who along with James Watson determined the double-helix structure of DNA in 1953, worked with Bates during the war. He said (see for example [11]):-

Beneath a quiet, rather reserved manner, David seemed confident in himself, with a shy, rather engaging charm ... I recall my association with him with affection ...

When the war ended Bates and Massey returned to University College London. Bates never completed his doctoral dissertation; the opportunity had passed and by this time he was too much of an established researcher to require a Ph.D. He was appointed as a Lecturer in Mathematics at University College in 1945. Together with two research students, Bates produced many important research papers applying mathematical techniques in the study of the ionised regions of the Earth's atmosphere. In particular they [4]:-

... began a programme of quantum mechanical calculations of atomic and molecular processes, especially those of importance in the upper atmosphere.

The year 1950 was important for Bates who took study leave and spent the year in Pasadena, California, where he began a collaboration with Marcel Nicolet, but also was able to visit Princeton University where he wrote an important paper The density of molecules in interstellar space in collaboration with Lyman Spitzer. It was during his year in the United States that Bates began to wear a red tie and red socks, something which became his trademark attire from that time on. In 1951 Bates was awarded a D.Sc. by University College London and made a Reader in Physics there. However, later the same year he accepted an appointment as Professor of Applied Mathematics at Queen's University, Belfast. Ray Flannery writes [8]:-

He created a supportive yet challenging environment at Queen's, and many came from all over the world to carry out research in atomic, molecular and atmospheric physics, under his inspiration and direction. To have built this world-class department within such a short time was no mean achievement. It required great intellectual might and vision, incredible leadership and insight, sustained dedication and loyalty.

David Bates was elected a fellow of the Royal Society of London in 1955. He travelled to London for the ceremony where new members of the Society were admitted and, on that occasion, met Barbara Morris. Soon after this he took Barbara to see Burlington House, where the Society had its premises, and there proposed marriage. They were married in London on 20 March 1956 and Harrie Massey, who attended the wedding, said (see for example [7]):-

In 1956 my wife and I had the privilege of attending his wedding to Barbara. After the ceremony we lunched at the Coq d'Or and thence, while Barbara and my wife looked at the shops, Bates and I attended a meeting of the Gassiot Committee ...

(We note that the Gassiot Committee was a Royal Society of London Committee of experts on the upper atmosphere of the Earth.) The next day the newly married couple returned to Belfast and spent a short honeymoon touring Ireland. David and Barbara Bates had two children, Kathryn Maud Bates and Adam David Bates.

At Queen's University Belfast Bates taught courses extremely successfully at all levels. Alex Dalgarno (1928-2015), one of Massey's Ph.D. students at University College and later one of Bates' colleagues at Queen's, writes about Bates' undergraduate teaching in [7]:-

Though the years at Queen's, David taught the entire range of undergraduate classes. Many recall the clarity of his expositions and the revelation that mathematics could be used to study interesting questions of physics. In the classes for those specialising in applied mathematics, David took the time to speak individually to every one of the students and to discuss their progress. They may not have recognised it at the time, but David was motivated by his concern that they achieve their full potential and he also wished to ensure that any failure to do so was not caused by neglect on his part or lack of diligence and commitment on theirs.

In his studies, Bates combined physical insight with mathematical formulations constructed so that numerical calculations could be carried out to enable quantitative comparisons to be made of theory and measurement. He investigated a diverse range of processes and made significant contributions to the accurate description of photoionization, photodetachment, collisional excitation, ionization and charge transfer, chemical reactions, mutual neutralization, radiative association, dissociative recombination, dielectronic recombination, collisional-radiative recombination, and ion-ion recombination.

... for exceptional contributions to planetary and solar system science;

the David Bates Prize of the Institute of Physics awarded:-

...for distinguished achievement in atomic, molecular, optical and plasma physics;

and the Bates Prize by Queen's University Belfast:-

... to a student who has performed with distinction in the final honours examination in the Department of Applied Mathematics and Theoretical Physics and who subsequently pursues research in the department.

Of course, Northern Ireland was going through a very difficult period with paramilitary violence causing high tensions, armed men patrolling the streets, night long curfews and a whole range of problems. Northern Ireland was divided into Roman Catholic and Protestant communities leading to politics being conducted totally along sectarian lines. Bates was strongly opposed to referring to his students as 'Catholics' and 'Protestants' using instead the phrase 'nourished by our two different traditions'. It was no surprise that he was a founder member of the Alliance Party of Northern Ireland in April 1970 which attempted to break the sectarian divisions of politics. With both Roman Catholic and Protestant members it argued for moderate policies and improving cross-community relations. Bates wrote an influential letter to The Times concerning the Alliance Party and served as its Vice-President for the rest of his life.

A serious heart attack in 1973 did nothing to stop his remarkable research output with over 100 of his 339 publications being written after this major illness. In fact he published six papers in 1973 and nine in the following year. Although he lived for over twenty years after this serious heart attack, in the end his death came through heart failure.

The following quote from [5] forms a fitting tribute to this great scientist and mathematician:-

David Bates was one of the greatest twentieth-century Irish scientists. He was a brilliant, innovative and productive theoretical physicist and chemist. He was a very modest, kind and generous person, an inspiration to generations of students. After his retirement in 1982, QUB named the building which houses the Theoretical and Computational Physics Research Division, the David Bates Building. He was especially proud of 'having his name over the shop' and continued to work in his office, stimulating everyone by his perceptive questions. He was a most devoted husband to Barbara and loving father to their two children Katharine and Adam.

Other Mathematicians born in Ireland

Other websites about David Bates: