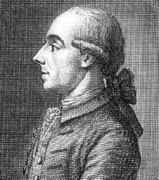 Johann(III) Bernoulli was a son of Johann(II) Bernoulli. He was certainly considered a prodigy when a child with an encyclopedic knowledge and, like many other members of his extraordinarily talented family, he studied law and took an interest in mathematics.

At the early age of fourteen he graduated with the degree of master of law. He was appointed to a chair at Berlin Academy at the age of only 19. Frederick II asked him to revive the astronomical observatory of the Academy but this was not a task for which Johann(III) was particularly well suited. His health had never been particularly good and his qualities as an astronomical observer were relatively poor.

Johann(III) Bernoulli wrote a number of works on astronomy, reporting on astronomical observations and calculations, but these are of little importance. Strangely his most important contributions were the accounts of his travels in Germany which were to have a historical impact.

In the field of mathematics he worked on probability, recurring decimals and the theory of equations. As in his astronomical work there was little of lasting importance. He did, however, publish the Leipzig Journal for Pure and Applied Mathematics between 1776 and 1789.

He was well aware of the famous mathematical line from which he was descended and he looked after the wealth of mathematical writings that had passed between members of the family. He sold the letters to the Stockholm Academy where they remained forgotten about until 1877. At that time when these treasures were examined, 2800 letters written by Johann(III) Bernoulli himself were found in the collection.
Other Mathematicians born in Switzerland
A Poster of Johann(III) Bernoulli

Other pages about Johann(III) Bernoulli:

Other websites about Johann(III) Bernoulli: