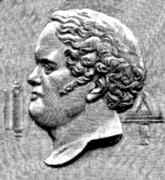 Barnabé Brisson's father, Antoine-François Brisson (1728-1796), was inspector of commerce and manufacture for the financial district of Lyons when his son Barmabé was born. Antoine-François was a scholar who published Mémoires historiques et économiques sur le Beaujolais in 1795 and contributed to Diderot's Encyclopaedia. He was a member of various academies, including the Académie de Lyon and the Académie de Villefranche. Barnabé studied at the Collège Oratorien de Juilly. On 11 November 1793 he entered the École des Ponts et Chaussées in Paris and, on 21 December of the following year, he began to study at the newly created École Centrale des Travaux Publics which had opened that year. In 1795, while Brisson was a student there, the École Centrale des Travaux Publics was renamed the École Polytechnique. During these years he met Jean-Baptiste Biot and, as a consequence of their friendship, Biot got to know Brisson's sister Gabrielle who was sixteen at the time. Jean-Baptiste and Gabrielle were married in 1797. Brisson was highly thought of by Gaspard Monge, who was one of his teachers at the École Polytechnique. Brisson married Monge's niece, Anne-Constance Huart de l'Enclos (born 18 November 1789), in 1808. He graduated from the École Polytechnique in 1796 and then returned to the École des Ponts et Chaussées on 21 December of the same year. He was named as civil engineer in the Doubs department, in eastern France near the Swiss border, on 11 May 1798. The Doubs department had been created, along with 82 other departments, in 1790 during the French Revolution.

After sixteen months working in Doubs, Brisson was conscripted into the army on 12 September 1799. He served for less than a year before returning to his duties as a civil engineer, this time taking up a position in Besançon on 21 July 1800. He specialised in the design and construction of ship canals; in particular he applied descriptive geometry to problems of canals. While at the École des Ponts et Chaussées he had got to know Pierre-Louis Dupuis de Torcy (1770-1803) and they collaborated on Mémoire sur l'art de tracer les canaux à point de partage Ⓣ published in 1801. In this work they applied method of geometry they had learnt from Monge to problems of geography, in particular systems of canal routing [2]:-

Brisson and Torcy had worked out a powerful method for surveying all possible waterway linkages in France. [They] applied descriptive geometry to the actual geography of France [discovering] a way to find the lowest points in the watersheds between basins by a simple examination of existing topographical maps, which lacked contour lines and all but a few isolated points of altitude. Brisson's method thus overcame the limitations of contemporary cartography while avoiding the drawbacks of the traditional methods that employed the judgment of the human eye on the ground or the costly and time-consuming detailed instrument survey of alternative possibilities. By locating the appropriate summit point for any canal without leaving his study, Brisson could propose as "possible" over one hundred new canals, find the technically optimal (i.e. shortest and cheapest) routes for them to follow, and even determine for long and complicated lines compounded of several waterways the correct combination of summit points.

Between 1802 and 1809 Brisson collaborated in the construction of the St Quentin Canal, beginning the project on 3 July. This canal, with a 5 km tunnel, opened in 1810. It linked the North Sea and the Scheldt and Lys systems with the English Channel via the Somme. It also linked with Paris and Le Havre via the Oise and the Seine. While working on this project Brisson was promoted, first to Ordinary Engineer First Class on 28 March 1805 and again to Chief Engineer Second Class on 1 May 1808, a very great honour for someone only thirty years old. Between 1809 and 1814 Brisson was employed extending dikes and canals in the l'Escaut region, beginning this project on 1 March. These connect the rivers Somme, Oise and Escaut, connecting the region with the navigable waterways that link Paris and Flanders. While undertaking these projects he was promoted again, this time to Chief Engineer First Class on 1 March 1813. All this work had been carried out during a time of French expansion under Napoleon Bonaparte who had encouraged a huge programme of public works building. However, this all came to an end after Napoleon's abdication in 1813 and then his final defeat at Waterloo in 1815.

The events of 1814, when Belgium was made independent of France, brought Brisson back home and, on 1 August of that year, he was given the duties of chief engineer of the Department of Marne by Baron Pasquier. Here his main task was to oversee the repairs to roads and other structures which had been damaged during the recent wars. Over the next few years France was a much less prosperous country, having lost both territory and finance. Brisson carried out routine duties, based at Chalons-sur-Marne, but his fortunes improved markedly in October 1819 when François Becquey, the General Director of the Bureau of Ponts et Chaussées, toured the provinces and the two met. Becquey was about to initiate a programme of canal building and he discovered that Brisson was the man with precisely the expertise he needed. Brisson wrote to Becquey on 10 November 1819 ( see [2]):-

When you last passed through Chalons-sur-Marne you said that you would be interested in seeing the results of some studies that I have done on the interior navigation of France. Since that moment I have been busily writing up my research on that subject, and I am taking the liberty of submitting to you a first memoir covering what seems to me should comprise the first part of the general system of our interior navigation. If the views that I present seem to you likely to be taken into consideration and of becoming sooner or later some use, please let me know and that will be the most powerful encouragement for me to pursue the work I have undertaken. I will try in that case to present you later with the second part, which ought to contain a listing of the second-class canals, much more numerous than those of the first class and for which I have so far gathered the necessary materials for only about half of the kingdom.

Becquey read Brisson's memoir and sent him an encouraging reply on 8 December. In it he asked Brisson to come to Paris as quickly as possible to work with M. Dutens on a major report detailing the whole interior navigation system of France. The innovative geometric methods which Brisson had introduced in his 1801 memoir written with Dupuis de Torcy formed the basis of Brisson's approach and Becquey asked for a copy of the 1801 paper. Reed Geiger writes [2]:-

... Becquey chose him to be his "intimate counsellor" because the obscure young Brisson possessed exactly what Becquey needed to put together his canal programme.

The work done by Dutens and Brisson was put together as "Report to the King" which proposed a system of:-

... canals which will unite the most distant parts of the country, which will link all the rivers that traverse it, and will lead every point in the kingdom to the two seas. The admirable Languedoc Canal will then be only a branch of that vast system of internal navigation on which one will be able to travel from Marseille to Dunkerque or Strasbourg at will.

The report retained Brisson's first class and second class canals but added a third class consisting of all other options that had been suggested. Funding, of course, was the biggest problem and indeed private firms never came forward in the numbers hoped for to take the necessary risks involved in many of the projects. Brisson's career, however, began a rapid rise to fame.

... once ensconced in Paris he began a meteoric rise that carried him to the top of the corps in less than five of the eight years he had left to live. In the 1820s, Brisson was at the centre of everything concerned with canals: professor and administrative head of a newly revitalised École des Ponts et Chaussées, secretary of the General Council, charter member of Becquey's new Canal Commission, and consultant to private companies.

His mathematical work is closely associated with Gaspard Monge. He edited the fourth edition of Monge's Géométrie descriptive Ⓣ, adding two new chapters. It is remarkable that following its first publication in 1820, nineteen editions of Brisson's edition were published up to 1922. Brisson also wrote Notice historique sur Gaspard Monge Ⓣ (1818) following Monge's death in 1818. He also brought out an edition of Monge's Théorie des ombres et de la perspective Ⓣ which was published in 1827.

His favourite field of study was the theory of partial differential equations. Brisson drew up two important reports on this subject. One was read before the Académie des Sciences by Biot, his fellow student at the École Polytechnique and his brother-in-law. This paper was published in 1808. The other was read in 1823 and was not published. The main idea in these reports was the application of the functional calculus, through symbols, to the solution of certain kinds of linear differential equations and of linear equations with finite differences. The 1823 report was the object of lively discussion in 1825 before the Academy and was approved of by Cauchy, who, although he had some reservations about the validity of some of the symbols used and the equations obtained, emphasized the elegance of the method and the importance of the objects to which they were applied. Cauchy followed the way opened by Brisson, who thus became one of those who developed the methods of functional calculus.

As to his character, the author of [7] writes that he had great virtues as a family man. He was an:-

... excellent husband, good father, good brother, and a faithful and devoted friend. Forgetful of his own interests to look after those of everyone else, we can say that the qualities of his heart were equal to those of his mind.

He died at the Hôtel de France in Nevers.
Other Mathematicians born in France
A Poster of Barnabé Brisson

Other websites about Barnabé Brisson: