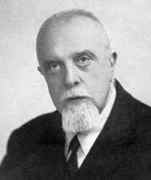 Luigi Brusotti's parents were Ferdinando Luigi Carlo Magno Brusotti and Camilla Maria Antonia Lucia Franchi. Ferdinando Brusotti, born in Rosasco on 5 November 1839, studied engineering at Turin to please his family although he had wanted to study physics. Graduating in 1864 he was appointed to the University of Pavia in the following year. Except for a short time when he lectured in Rome, he spent the rest of his career at Pavia. Ferdinando and Camilla Brusotti were married in 1874 and had two children, Marina born in 1875 and Luigi, the subject of this biography, born in 1877. Marina (1875-1967) married Vittorio Gallo. Ferdinando, Luigi's father, retired in 1895 and died on 29 December 1899. He is most famed as an inventor, laying a telephone line from Pavia to Lomello in 1874, and inventing the electric light bulb in 1877, two years before Thomas Edison. When he learnt of Edison's work on the light bulb he abandoned his project in 1879. He published La velocità molecolare dei gas e la corrispondente velocità del suono Ⓣ in 1877. Luigi was, therefore, born into a family where research, inventions and physics were part of life [2]:-

Luigi Brusotti did not lack reasons to attract him towards difficult mathematics, which, in the wide circle of his relatives, he, although young, could feel the powerful influence emanating from the impressive figure of Felice Casorati.

Felice Casorati was professor of mathematics at Pavia when Luigi Brusotti was born and continued until his death in 1890. At the 'Ugo Foscolo' high school in Pavia Brusotti was taught mathematics by Pilo Predella and Luigi Berzolari. The High School was named for Ugo Foscolo (1778-1827) a famous Italian writer and poet. It specialised in a classical education and indeed Brusotti proved an exceptional student of classical studies. However, he was strongly influenced by his mathematics teachers, particularly Berzolari who, in addition to teaching at the school, lectured at the University of Pavia. Seeing that his young pupil was talented in mathematics, Berzolari strongly encouraged him and introduced him to advanced topics.

After graduating from the 'Ugo Foscolo' high school, Brusotti enrolled at the University of Pavia. In his final year he worked on a geometry dissertation advised by Ferdinando Aschieri (1844-1907). Aschieri had been born in Modena and graduated from the University of Pisa in 1867 having been a pupil of Eugenio Beltrami. He taught at the Liceo in Parma and the Technical Institute of Pavia, before being appointed to the University of Pavia in 1875. He was promoted to full professor on 1884. At Pavia he taught descriptive geometry, projective geometry and higher geometry. Brusotti's dissertation, supervised by Aschieri, was of high quality but it did not result in publications since the results had been independently discovered and published by others. In addition to attending courses delivered by Ferdinando Aschieri, Brusotti had attended courses by Luigi Berzolari and Ernesto Pascal.

Brusotti graduated from the University of Pavia on 10 July 1899 with honours in pure mathematics. He spent the following academic year, 1999-1900 in Pisa where he attended courses, both at the University and at the Scuola Normale Superiore, delivered by Ulisse Dini, Eugenio Bertini and Luigi Bianchi. After his year at Pisa, Brusotti returned to Pavia where he was an assistant to Luigi Berzolari, Carlo Formenti (1841-1918) and Ferdinando Aschieri. Formenti, a member of the Istituto Lombardo, was professor of rational mechanics at the University of Pavia. During the years 1900-01 and 1901-02 Brusotti was a voluntary assistant involved in exercise classes in algebraic analysis and analytical geometry. In 1902-03 he was supported by a scholarship and taught rational mechanics. He continued to work as an assistant in 1903-04 and 1904-05 teaching algebraic analysis and analytical geometry as well as drawing in projective geometry and descriptive geometry. It was during these years when he was working as an assistant that Brusotti began publishing the results of his research.

... in line with the scientific orientation of his teacher L Berzolari, concern the invariant theory of algebraic forms, especially binary forms, with their geometric applications, a field of study very much cultivated at the time and to which he brought considerable and comprehensive contributions.

In 1906 Brusotti left university teaching and, for a twenty years, he taught mathematics in secondary schools. He taught in the high schools of Foggia, Como, Sondrio, the "Berchet" high school in Milan and at the Technical Institute in Pavia. In Brusotti these institutions [2]:-

... had a high-prestige teacher, a zealous and loving teacher, a very effective educator everywhere, but especially in Sondrio, at the "Berchet" in Milan and at the Technical Institute of Pavia, where he remained longer. He left a very grateful persistent memory. Nor did he miss out on official acknowledgments, since he enjoyed two career advancements for distinguished merit, won three special competitions, had inspection duties in middle schools, and was enrolled in the role of honour.

On 6 May 1910 Brusotti returned to the University of Pavia when he was appointed as a Lecturer teaching analytical geometry. He continued in this role then later in some years he taught higher geometry while in others it was complementary mathematics or analytical geometry. During this period, as well as his university duties he continued to teach at the Technical Institute in Pavia. On 1 March 1926 he won a contest to become ordinary tenured professor of descriptive geometry at the University of Cagliari, becoming a full professor in the following year. He then changed to become professor of analytic and projective geometry. After two years at Cagliari, he succeeded Luigi Bianchi, who died in June 1928, when he was appointed to the chair of analytic geometry at the University of Pisa. He remained at Pisa for three years before returning to his home town of Pavia when he was appointed as Professor of Projective and Descriptive Geometry with Drawing. In 1937 he moved to the chair of Higher Geometry. In 1947 he reached the age of 70 but continued to teach at Pavia as a non-tenured professor. In 1952 he reached the age of 75 and he retired being appointed as professor emeritus at this time. The following paragraph is based on [3] but we have added a few further details:-

His great talent as a scientist, as a teacher and as a man had noteworthy recognitions: he was director of the Mathematical Institute of Pavia from 1931 to 1953; president of the Italian Society of Physical and Mathematical Sciences "Mathesis" from 1954 to 1957; a corresponding member of the Istituto Lombardo di Scienze e Lettere from 1932 to 1940 when he became a full member; a corresponding member of the Accademia dei Lincei from 1954 and of the Società delle scienze di Liège from 1954; a member of the Italian Commission for the teaching of mathematics (1936-38); and awarded the Gold Medal for Merit in Education, Culture and Arts in 1958. At the University of Pavia he is remembered with a commemorative plaque at the Institute of Mathematics.

Regarding his mathematical research, we follow [3] which is Andrea Mariani's translation of [4]:-

From 1910 onwards, his scientific activity was predominantly directed towards the so-called "questions of reality" of algebraic geometry in the projective orientation. The algebraic entities were much studied at the time in the complex field, but, even though their consideration from the real point of view was not neglected, there were a lot of open questions with no easy solutions. In this area of work Brusotti has, in almost fifty years of activity, brought an impressive contribution of new results, consisting of a true body of theory, hinged on the so-called "method of small variation," which has brought him fame in Italy and abroad.

But Brusotti wrote on other topics in addition to the main thrust of his research which we mentioned above [3]:-

Other writings are dedicated to questions of analysis, of projective differential geometry; others have a historical and critical character or didactic and methodological; still others are commemorations and reviews; finally three fine articles in the "Enciclopedia delle matematiche elementari" Ⓣ deserve a special mention. These are on "measure theory" (II, p. 119-174), "polygons and polyhedrons" (II, p. 255-322), "didactic questions" (III, p. 885-973), also noteworthy for both the quantity and the precision of their bibliographic information.

Brusotti died in 1959 and, following his death, his sister Marina Gallo decided to donate Brusotti's personal library to the Institute of Mathematics of the University of Pavia. The Faculty was delighted to accept the gift, considering its remarkable value and the relevance of both the books and the archival material. The official acceptance took place in November 1959. The complete donation includes the entire private holdings of Brusotti: 4 bookcases containing about 600 books, of which about 130 are antique works, and some furnishings that allow the original arrangement of the private library to be maintained. The collection includes texts on mathematics and engineering, natural and agricultural sciences, literary classics, historical editions of the Bible, as well as numerous volumes of periodicals, mostly from the early decades of the twentieth century, and a substantial archive (not yet catalogued) which includes photographs, letters, portraits, etc., several handwritten notebooks of Brusotti when a student (which include very accurate notes of courses he followed) and notebooks containing the lectures he gave as a professor, as well as manuscripts of his father Ferdinando and other Italian mathematicians.
Other Mathematicians born in Italy

Other pages about Luigi Brusotti:

Other websites about Luigi Brusotti: