Born
9 November 1847
Asti, Piemonte (now Italy)
Died
25 October 1884
Milan, Italy
Summary
Alberto Castigliano was an Italian mathematician and physicist who may be credited with the discovery of the principle of least work. 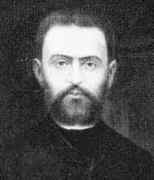 Alberto Castigliano moved from the region of his birth, Piedmont in northwestern Italy, to the Technical Institute of Terni in 1866. After four years in Terni, in Umbria, Castigliano moved north again, this time to become a student at the Polytechnic of Turin. After three years of study in Turin he wrote a dissertation in 1873 Intorno ai sistemi elastici Ⓣ for which he is famous.

After graduating from the Polytechnic of Turin, Castigliano was employed by the Northern Italian Railways. He headed the office responsible for artwork, maintenance and service and worked there until his death at an early age.

In his dissertation there appears a theorem which is now named after Castigliano. This is stated in [1] as:-

... the partial derivative of the strain energy, considered as a function of the applied forces acting on a linearly elastic structure, with respect to one of these forces, is equal to the displacement in the direction of the force of its point of application.

Castigliano's results contain the principle of least work as a special case and this was to lead to a dispute with Menabrea in which Castigliano came off less well than he had hoped. As B A Boley writes in [1]:-

It is clear that Menabrea's principle may be considered to be included in Castigliano's theorems; furthermore, Menabrea's proofs were not satisfactory and were in fact repeatedly modified by him.

Certainly when Menabrea attempted another proof of his principle in 1875 he used Castigliano's results but his only reference to Castigliano was in a footnote. Castigliano did not find this satisfactory and objected to the lack of recognition given to him by Menabrea. Cremona chaired a special meeting of the Accademia dei Lincei which was asked to judge whether Menabrea had indeed acted unfairly towards Castigliano. Cremona did not find in favour of Castigliano, stating the decision of the committee:-

Mr Castigliano can have the honour of having done a good piece of work: no one will be able to take away from Member Menabrea the merit of having made popular and of common use a general principle, which is certainly destined to receive ever more extensive application.

Although Cremona may well have been right in saying that the credit for the principle should go to Menabrea, his claims that Menabrea has the merit of making them popular is less certain. As B A Boley says in [1] when he summarises Castigliano's contribution:-

To assess the importance of his contribution, however, it is important to note that, although there is some validity in Cremona's attribution of the popularisation of energy methods to Menabrea, it is precisely in this respect that Castigliano excels. He solved an amazing number of structural problems by his methods.

Other Mathematicians born in Italy
A Poster of Alberto Castigliano

Other websites about Alberto Castigliano: