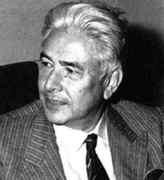 Ennio De Giorgi's mother was Stefania Scopinich, whose family came from Lussino. His father, Nicholas De Giorgi, was a teacher whose interests included the Arabic language, history and geography. He had a sister Rose and a brother Mario. Sadly Ennio's father died in 1930, and after this Stefania did a wonderful job of bringing up her family. Ennio attended the "G Palmieri" high school in his home town and showed exceptional talents. However. initially, his interests were not directed towards mathematics [3]:-

... as a child I had a special taste for puzzling out solutions to little problems, but I also had a certain passion for experimenting with little gadgets - experiments, if not of physics, of "pre-physics'".

After graduating from secondary school in 1946 and obtaining his liceo, he travelled to Rome to enter the University there but, given his interests in gadgets, it was the Faculty of Engineering that he entered with the intention of taking a degree in engineering. Despite his decision of the topic to study, De Giorgi had already discoved while at school the joy of finding proofs of mathematical theorems which were different from those written in the textbooks. This is certainly an early indication of his love of research.

After one year of study he decided that mathematics, and not engineering, was the subject for him [3]:-

In those days the courses of study in mathematics, engineering, and physics were the same for the first two years. It was in that first year that I realized that my natural aptitude was, above all, in mathematics.

In mathematics he studied with Mauro Picone who influenced him strongly [3]:-

... at the Institute for Mathematics in Rome I studied with and received my degree from Professor Picone, who was, as an academic, faithful to the style of those days, that of the so-called "Baron", but who, in discussions of scientific problems, was completely open. I remember that while I was still a student, he said, "Mind that when we speak of scientific problems you are completely free to tell me that I am mistaken, because we are equal in front of science." So he was extremely liberal in scientific dialog but fully respectful of the discipline and the academic customs of the day. For these reasons Picone became one of the great teachers and had many very diverse students, like Fichera, Caccioppoli, and many others, with greatly differing personalities and interests, even in mathematics. Everyone was attracted to Picone because of his accessibility, his interest in all problems, whether those which he personally had studied and resolved or those which interested whoever came to speak with him.

De Giorgi completed his undergraduate studies in 1950 when he was awarded his laurea. He then began research work at the Castelnuovo Institute of Rome where he was an assistant to Mauro Picone. Jacques-Louis Lions and François Murat write in [7] (see also [6]):-

Professor and student were indeed an odd match: the former, a classicist, dressed with rigour and elegance; the latter, unorthodox, already wearing his strange beret. But M Picone, a seasoned observer of the development of science, knew how to spot talent; he soon acknowledged E De Giorgi's exceptional abilities. The assistant was freed from all constraints and worked as he pleased at his own leisurely but, in the end, frightfully efficient rhythm.

De Giorgi attended lectures by Caccioppoli on geometric measure theory, but already by this time he had his own ideas about how to attack problems of minimal surfaces. Influenced by methods which Caccioppoli had developed, De Giorgi went on to develop new techniques in geometric measure theory and he applied his results to the calculus of variations proving his regularity theorem for almost all minimal surfaces.

In 1955 De Giorgi gave an important example which showed nonuniqueness for solutions of the Cauchy problem for partial differential equations of parabolic type whose coefficents satisfy certain regularity conditions. In the following year he proved what has become known as "De Giorgi's Theorem" concerning the Hölder continuity of solutions of elliptic partial differential equations of second order. These results were similar to those proved by Nash at about the same time. De Giorgi said [3]:-

Nash and I proved the same theorem, or, rather, two theorems very close to each other. From the theorem of Nash one can deduce more or less immediately my theorem, following a quite different line of proof. Thus, from my experiences, the discovery of a theorem can be made by different people, as if it were there waiting for someone to uncover it, and the statement of the theorem is always the same. However, the invented proof can vary greatly according to the mathematician who finds it.

In 1958 De Giorgi was appointed to the Chair of Mathematical Analysis at the University of Messina and he took up the appointment in December of that year. He held this post for less than a year, however, for he was approached by Alessandro Faedo who persuaded him to move to the Scuola Normale Superiore at Pisa. In the autumn of 1959 De Giorgi moved to Pisa to take up the Chair of Mathematical Analysis [7]:-

For almost forty years, he lived there, taught there, and was a constant source of inspiration for the mathematical school that he founded. Always cheerful, always available, he enjoyed long debates with his students during which he would toss out original ideas and propose conjectures, or sketching the lines of a proof.

A full description of De Giorgi's mathematical work is given in [1] as is a list of his 149 publications. The authors of this paper are all students of De Giorgi and they describe his contributions to geometric measure theory, the solution of Hilbert's XIXth problem in any dimension, the solution of the n-dimensional Plateau problem, the solution of the n-dimensional Bernstein problem, some results on partial differential equations in Gevrey spaces, convergence problems for functionals and operators, free boundary problems, semicontinuity and relaxation problems, minimum problems with free discontinuity set, and motion by mean curvature.

De Giorgi received many honours for his outstanding mathematical contributions including the Caccioppoli Prize in 1960, the National Prize of Accademia dei Lincei from the President of the Italian Republic in 1973, and the Wolf Prize from the President of the Israel Republic in 1990. He was also awarded Honoris Causa degrees in Mathematics from the University of Paris in 1983 at a ceremony at the Sorbonne and in Philosophy from the University of Lecce in 1992. He was elected to many academies including: the Accademia dei Lincei, the Pontifical Academy of Sciences, the Academy of Sciences of Turin, the Lombard Institute of Science and Letters, the Académie des Sciences in Paris, and the National Academy of Sciences of the United States.

We should not end this biography without mentioning other aspects of De Giorgi's live. He was a very religious man and often spoke of his beliefs in connection to mathematics. In particular he believed that the power of mathematics to describe the world lay in religion [3]:-

For me the most suggestive indicator is in the Book of Proverbs, one of the most ancient books of the Bible, which at a certain point says that wisdom (which is wider than mathematics) was with God when He created the world and that this wisdom is to be found by men who search for it and adore it. Mathematics is one of the most significant manifestations of the love of wisdom.

There is another aspect of De Giorgi's life that we should mention. He was a passionate advocate of human rights and he expressed this by his active work with Amnesty International [3]:-

We should recount the way that he put his beliefs into practice. In 1966 Giovanni Prodi asked him to help with teaching at the university in Asmara, the capital of Eritrea, which was run by Italian nuns. He accepted with enthusiasm, and taught there for one month in each year until 1973.

From 1988 De Giorgi began to experience health problems. He returned every summer after this to his home town of Lecce, in southern Italy, to be with his brother and sister and their families. In September 1996 he was taken to hospital in Pisa where he died following an operation.
Other Mathematicians born in Italy
A Poster of Ennio De Giorgi

Other websites about Ennio De Giorgi: