Born
about 492 BC
Acragas (now Agrigento, Sicily, Italy)
Died
about 432 BC
Peloponnese, Greece
Summary
Empedocles was a Greek philosopher who is best known for his belief that all matter was composed of four elements: fire, air, water, and earth. Some have considered him the inventor of rhetoric and the founder of the science of medicine in Italy. 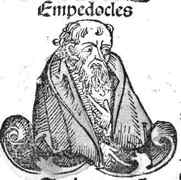 Empedocles was born in Acragas on the south coast of Sicily. The name Acragas is Greek, while the Latin name for the town was Agrigentum. Later the town was called Girgenti and more recently it became known by its present name of Agrigento. It was one of the most beautiful cities of the ancient world up to the time it was destroyed by the Carthaginians in 406 BC. It was, in Empedocles time, a rich city containing the finest Greek culture. Some of the Pythagoreans had come there after being attacked in their centre at Croton.

Empedocles was born into a rich aristocratic family. He travelled throughout the Greek world participating fully in the extraordinary desire for learning and understanding which gripped that part of the world. He is described as follows by Sarton [5]:-

He was not only a philosopher but a poet, a seer, a physicist, a social reformer, a man of so much enthusiasm that he would easily be considered a charlatan by some people, or become a legendary hero in the eyes of others.

There are many legends regarding Empedocles life. He wrote poetry and 450 lines of such had been preserved by later writers such as Simplicius, Aristotle, Plutarch and others. It is not difficult to see the source of most of the legends about Empedocles for these are built on the poems that he wrote himself. In these he claims god-like powers, but whether this was simply a poetic style or whether he really did believe that he had such powers it is hard to say. Certainly his poems were much appreciated, for example Lucretius admired his hexametric poetry.

If we are to gather anything about the character of the man then it will come from the lines of poetry which have been preserved: 400 lines from his poem Peri physeos (On Nature) and the remainder from his poem Katharmoi (Purifications). These [1]:-

... reveal a man of fervid imagination, versatility, and eloquence, with a touch of theatricality.

Some details of his travels appear accurate. He went to Italy and was in the town of Thurii, Lucania shortly after 445 BC. From there he went to the Peloponnese and he was in Olympia in 440 BC. His songs were sung at the Olympic games in that year. He had a young friend, Pausanias the son of Anchitos, who went with him on his travels. Of the many legends regarding his death, the most likely would appear to be that he died following a feast in the Peloponnese. Sarton writes [5]:-

Empedocles was so great and rare a man that he left no school; none of his admirers or disciples, not even the faithful Pausanias, was able to continue the master's work.

Certainly Empedocles was attributed with many "firsts". Aristotle is said to have considered him the inventor of rhetoric while Galen regarded him as the founder of the science of medicine in Italy. He is best known, however, for his belief that all matter was composed of four elements: fire, air, water, and earth.

The reason for his four element theory was to argue a modification of the belief of the Eleatic School, one of the leading pre-Socratic schools of Greek philosophy, which had been founded by Parmenides in Elea in southern Italy. The philosophy of this school, which included Zeno of Elea, was the claim that the many things which appear to exist are merely a single eternal reality. Empedocles did not go for the "all is one" version, but his "all is composed of the four elements" is extremely important in the development of science since it was adopted by Plato and Aristotle. As Sarton writes [5]:-

In spite of its arbitrariness, that hypothesis had a singular fortune, for it dominated Western thought in one form or another almost until the eighteenth century.

We should also note an important feature of the hypothesis. It, like the ideas of Pythagoras, tried to explain the multitude of complexity seen in the world as being the consequence of a small number of simple underlying properties. Although we no longer believe in Empedocles' four element theory, we do still look for simple mathematics which will explain the complex phenomena that surround us.

Empedocles did not base his four element hypothesis on any experimental evidence. He did base some other scientific ideas on experiment, however, and he showed by experiment that air existed and was not empty space. He did this with a clepsydra, a vessel with a hole in the bottom and one in the top. Placing the bottom hole of the vessel under water, Empedocles observed that the vessel filled up with water. If, however, he put his finger over the top hole, then the water did not enter the hole at the bottom but it did once he removed his finger. Empedocles correctly deduced that the air in the container prevented the water entering.

Empedocles believed that light travelled with a finite velocity, not through any experimental evidence, of course, but simply through reasoning. Aristotle writes in De sensu :-

Empedocles says that the light from the Sun arrives first in the intervening space before it comes to the eye, or reaches the Earth. This might plausibly seem to be the case. For whatever is moved through space, is moved from one place to another; hence, there must be a corresponding interval of time also in which it is moved from the one place to the other. But any given time is divisible into parts; so that we should assume a time when the sun's ray was not as yet seen, but was still travelling in the middle space.

It is remarkable how many of Empedocles' ideas have turned out to be correct. In addition to his belief in the finite velocity of light he also developed a crude evolutionary theory based on the survival of the fittest. He also had a form of the law of conservation of energy and had a theory of constant proportions in chemical reactions. His ideas, although they had little influence on the development of science, can be seen in the light of our current scientific knowledge to be quite incredible. If we have to explain how such prophetically correct ideas could have such little influence we have to agree with the philosopher Hans Reichenbach who, in a book published in 1957, said (see [1]):-

... a good idea stated within an insufficient theoretical frame loses its explanatory power and is forgotten.

Other websites about Empedocles: