Born
19 June 1771
Nancy, France
Died
4 May 1859
Montpellier, France
Summary
Joseph Gergonne was a French mathematician who published an influential journal and made contributions to duality theory in projective geometry. 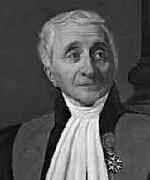 Joseph Gergonne's father was an architect and also a painter. However, he died when Joseph was twelve years old. Joseph was educated at the Collège de Nancy which was a religious establishment. After leaving the Collège he did some private tutoring but, like everyone else in France at this time, he was caught up in the events surrounding the French Revolution.

In 1791 the French Assembly was at a difficult stage trying to stabilise the country following the French Revolution. The Assembly was not helped by the King, Louis XVI, attempting to flee the country in June of that year. After the King was returned to Paris, the Assembly reinforced the frontiers of France by calling for 100,000 volunteers from the National Guard. Gergonne gave his support becoming a captain in the National Guard.

In April 1792 France went to war against Austria and Prussia. The French attack was quickly halted and then Prussian forces invaded France. The Assembly called for 100,000 military volunteers and Gergonne joined the French army being assembled to defend Paris against the Prussians. On 20 September 1792 Kellermann led the French forces at Valmy with Gergonne in his army. The French defeated the Prussians in an artillery duel and, following this, the Austrian and Prussian armies retreated from France.

Following this great French victory, Gergonne went to Paris where he became a secretary to his uncle. It was a time of much military action, however, and Austria and Prussia were not going to simply accept the defeat at Valmy as the end of the war. By 1793 they were joined by Spain, Piedmont, and Britain. The French forces were soon in trouble, fighting on many different fronts and being defeated everywhere. Gergonne returned to the French army, this time as secretary to the general staff of the Moselle army.

Gergonne spent a month at the Châlons artillery school in 1794 and after this he was commissioned as a lieutenant. With Spain having declared war on France in 1793, France sent forces to attack Spain in 1794. Gergonne was attached to these forces which entered Spain and laid siege to the town of Figueras capturing it.

In 1795 Frederick William II of Prussia made a separate treaty, the Treaty of Basel, with the French and withdrew from the coalition against France. At this stage Gergonne was sent with his regiment to Nimes in southern France. In that city the École Centrale had been set up shortly before and Gergonne was appointed to the chair of transcendental mathematics.

This was not the end of problems in French politics, with the great military campaigns of Napoleon Bonaparte over the following years. Gergonne, however, settled down at this point. He married and began to concentrate on mathematics. His career was much influenced by Monge who, by this time, was Director of the École Polytechnique in Paris.

Finding problems getting his mathematics papers published, Gergonne established his own mathematics journal, the first part appearing in 1810. The Journal was officially called the Annales de mathématiques pures et appliquées Ⓣ but became known as Annales de Gergonne . Gergonne's mathematical interests were in geometry so it is not surprising that it was this topic which figured most prominently in his journal. In fact many famous mathematicians published in the twenty-one volumes of the Annales de Gergonne which appeared during a period of twenty-two years. In addition to Gergonne himself (who published around 200 articles), Poncelet, Servois, Bobillier, Steiner, Plücker, Chasles, Brianchon, Dupin, Lamé, Galois and many others had papers appear in the Journal.

In 1813 Gergonne wrote a prize winning essay for the Bordeaux Academy Methods of synthesis and analysis in mathematics. The essay has never been published but a summary of it appears in [5]. The essay tells us a lot about Gergonne's mathematical ideas. Despite the title of the essay, he suggests that the terms "analysis" and "synthesis" should not be used since everyone uses them with a different meaning. Perhaps surprisingly, since Gergonne was himself a geometer, he suggests that algebra is a more important topic than geometry. In a remarkable piece of foresight, he saw a time in the future when quasi-mechanical methods would be used to discover new results.

We will examine Gergonne's contributions to geometry later in this article, but for the moment it is worth noting that he did publish on other topics. For example in 1815 he published Application de la méthode des moindre quarres a l'interpolation des suites in his own journal. This paper examines the problem of observing values of a response function which depends upon a single independent variable. Gergonne looked at how to estimate the values of the response function, and of its derivatives, at a point when there are random errors in the observed values.

Gergonne was appointed to the chair of astronomy at the University of Montpellier in 1816. There is a nice story told by Struik in [1] where he writes:-

... during the July Revolution of [1830], when rebellious students began to whistle in his class, he regained their sympathy by beginning to lecture on the acoustics of the whistle.

It was in 1830 that Gergonne became rector of the University of Montpellier. He decided to end publication of his journal at this time although the monthly parts continued to appear until 1832. Gergonne retired in 1844 at the age of 73.

Gergonne provided an elegant solution to the Problem of Apollonius in 1816. This problem is to find a circle which touches three given circles. Gergonne introduced the word polar and the principle of duality in projective geometry was one of his main contributions. Gergonne's first contributions to duality appear in a series of papers beginning in 1810. He noticed the fact that certain forms of geometry yielded theorems which appeared in related pairs, and this led him to a more detailed analysis of why this was so. Then [1]:-

... in three articles in the Annales [1824-27], Gergonne [gave] the general principle that every theorem in the plane, connecting points and lines, corresponds to another theorem in which points and lines are interchanged, provided no metrical relations are involved.

We have already illustrated Gergonne's interest in the philosophy of mathematics with a description of his unpublished essay on the topic in 1813. He sprinkled charming philosophical comments around his papers. Chasles, in Aperçu historique ... Ⓣ, notes the comment by Gergonne:-

It is not possible to feel satisfied at having said the last word about some theory as long as it cannot be explained in a few words to any passer-by encountered in the street.

Given this criterion, I doubt whether any theory has had the last word said about it!
Other Mathematicians born in France
A Poster of Joseph Gergonne

Other pages about Joseph Gergonne:

Other websites about Joseph Gergonne: