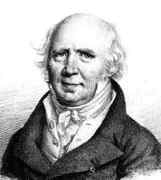 Pierre-Simon Girard's father, Pierre Girard, was a goldsmith and watchmaker who was a strict Calvinist. Pierre-Simon's early education was in Caen where he showed a strong preference for mathematical and scientific topics. In 1787, when he was twenty-one years old, he began undertaking research into mechanics at the École des Ponts et Chaussés, being particularly interested in the resistance of solids, the strength of wood as a structural material, and in structural design involving beams, walls and columns. He was greatly influenced by his teacher at the École des Ponts et Chaussés, Jacques-Élie Lamblardie (1747-1797). He was appointed to the staff of the École des Ponts et Chaussés as an engineer in 1789. Following this, Girard was sent to Le Havre where Lamblardie was in charge of transportation, roads and the enlargement of the harbour. It was excellent practical training for Girard, for Lamblardie's successful venture led to Le Havre becoming one of the leading ports in Europe. Then Girard was assigned to Paris and, in 1790, saw that the Académie des Sciences had proposed a prize on the theory of locks applied to seaports and canals, and the best methods of construction. Although the topic was different from his research on wood as a structural material, he had gained experience in Le Havre so he submitted a treatise to the Académie des Sciences; it won the prize.

In addition to Jacques-Élie Lamblardie, another colleague at the École des Ponts et Chaussés was Gaspard de Prony and the two became close friends and collaborators. Girard and de Prony worked on geometrical problems from around 1791. In 1793 Girard wrote to de Prony saying:-

I would have sent you sooner ... the numerical application ... but I have been in Amiens since the beginning of the year ... I thank you for the solution you sent me to the geometry problem...

Girard had been in charge of planning and construction of the Amiens canal, which explains his reference to time spent in Amiens. After this de Prony and Girard decided to write a paper in which:-

Another project that Girard and de Prony collaborated on was the Dictionnaire des Ponts et Chaussés Ⓣ. Also in 1793, working with Jacques-Élie Lamblardie, he developed a method to measure the resistance of timbers to bending and buckling. In 1798 Girard published an important work Traité analytique de la résistance des solides Ⓣ on the strength of materials in which he described two machines for compression testing long columns of wood. His expertise came to the attention of Napoleon Bonaparte who was assembling a large expeditionary force to invade Egypt. In addition to military troops, Napoleon's force contained mathematicians, engineers, and other scientists. Girard joined Napoleon expeditionary force, which landed near Alexandria in July 1798, as Assistant Director of the Ponts et Chaussées. He had the support of a team of 24 engineers of the Ponts et Chaussées - both military engineers and topographical engineers, and with their assistance he drew plans for the city of Alexandria, the port and the surrounding coast [1]:-

... he soon undertook an extensive study of the surface elevation and bed characteristics of the Nile; this study eventually broadened to cover material on Egypt's agriculture, commerce, and industry ...

Napoleon set up the Institute of Egypt close to Cairo; it contained printing presses for both Arabic and Roman characters, a library, and laboratories for physical and chemical experiments. Girad, who had been appointed as Egyptian Minister of the Interior by Napoleon, proposed to the Institute that they should explore the Nile as far as the falls. He also took part in the study of ancient monuments, including that of Nilometer, the ancient Egyptian method of measuring the height of the Nile, in the temple on Elephantine Island. When the Mémoires sur l'Egypte Ⓣ was published it contained many articles by Girard covering all the areas we have mentioned above. He was one of eight authors of this comprehensive report. Among his works on Egypt we mention Mémoire sur l'agriculture, l'industrie et le commerce de l'Egypte Ⓣ, Mémoire sur les Mesures Agraires des Anciens Egyptiens Ⓣ and Observations sur la Vallée d'Egypte et sur l'Exhaussement Séculaire du Sol qui la recouvre Ⓣ.

He remained in Egypt until 1803, after the last of Napoleon's troops had left. After he returned to Paris, he was offered a major political position by Napoleon but he declined the offer, preferring instead the position of director of the Paris water supply. He was put in charge of the Ourcq canal project, one of many projects ordered by Napoleon to modernise Paris. While in charge of this project he was assigned a young assistant in 1809, namely Augustin-Louis Cauchy. The purpose of the project was to connect the rivers Seine and Ourcq with a ship canal so that Paris was accessible by shipping [1]:-

This led him to study the resistance of the flow of water through pipes and open channels.

He described the early work in Rapport sur le Projet Générale du Canal de l'Ourcq Ⓣ (1803), Devis général du Canal de l'Ourcq: depuis la première prise d'eau à Mareuil jusqu'à la barrière de Pantin Ⓣ (1806), and Devis du pont à bascule à construire sur le canal de l'Ourcq Ⓣ (1808). The first barges reached Paris from Ourcq in 1813 but after that the project ran into difficulties. In part the causes were political ones resulting from the abdication of Napoleon after the Allies captured Paris in April 1814, in part they were technical difficulties resulting from landslides around the Saint-Denis area in 1814 and 1815. Napoleon had been banished to Elba but escaped and returned to Paris in triumph in March 1815. He appointed Girard, always a staunch supporter, as Divisional Inspector of Ponts et Chaussées during the famous Hundred Days. However, when the monarchy was restored after the defeat of Napoleon at Waterloo, Girard was stripped of his rank. He continued to work on the Ourcq canal scheme but became involved in difficult discussions with the city of Paris over numerous technical issues. He was removed from heading the project in 1818 and the construction handed over to a private company to complete the work. Girard gave a full account of the Ourcq canal project in a two volume treatise Mémoires sur le Canal de l'Ourcq et la distribution de ses eaux: sur le dessèchement et l'assainissement de Paris, et les divers canaux navigables Ⓣ (1831-1840).

Once he was no longer involved in the Ourcq canal project, Girard was free to undertake other work and in 1819 he was commissioned to direct a project installing gas lighting in large Paris theatres and in various neighborhoods of Paris. One of his first acts was to visit London to inspect its lighting system and water distribution. In fact he had continued in his role of director of the Paris water supply throughout all these difficult times, and he remained in this position until he retired in 1831.

In [2] there is a description of a visit, made along with Girard himself, of a Mr Geniey to the 5 km long aqueduct supplying the water for Paris:-

At various points there are galleries and staircases, to descend to the subterranean aqueduct. I descended, to examine the work, with M Girard, the engineer, by a flight of steps from the cellar of a house ... Convenient arched passages are constructed under three principal streets, where one may walk, and where are laid the different mains, taking water from the aqueduct, to conduct it to the various fountains and points for distribution. They are laid upon stone blocks, or cast iron frames, so that they may be easily examined all round, from one end to the other. The beautiful fountain in the Garden of the Palais Royal, that in the Boulevard of Bondy, etc, are supplied from this water. The canal is estimated by P-S Girard, the engineer who constructed it and had the whole superintendence of distributing the water in Paris, at 4,000 inches of water.

Girard wrote extensively on fluids, in particular on flow in capillary tubes; for example Mémoire sur le Mouvement des Fluides dans les Tubes capillaires, et l'Influence de la Température sur ce Mouvement Ⓣ (1817). He was honoured for his work with election to first class in the National Institute of Sciences and Arts in 1815 (the Institute was renamed the Académie des Sciences in 1816); he became president in 1830. He was also honoured as Chevalier of the Légion d'Honneur in 1831.

Although Girard was brought up a Calvinist, he was not religious and so his daughter Louise Françoise Adèle (born 1803) was happy to convert to become a Roman Catholic before her marriage to the jurist, author and politician Charles Renouard on 23 March 1821.
Other Mathematicians born in France
A Poster of Pierre-Simon Girard

Other websites about Pierre-Simon Girard: