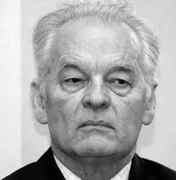 Bronius Grigelionis was born in Iciūnai, a village near the town of Vaškai in northern Lithuania. His parents, Ignas Grigelionis (1894-1973) and Ona Valeikaitė (1905 - 1986), were traditional farmers. When Ignas Grigelionis was young, he participated in the Lithuanian Wars of Independence as a partisan and was awarded two medals (Order of Vytautas Didysis and Order of Independence). In 1930 Ignas Grigelionis married Ona Valeikaitė from the village of Tetervinai, and they had eleven children (only nine of them grew up to adulthood, six boys and three girls). Bronius spent his childhood on a farm, so together with brothers and sisters they were constantly helping their parents with agricultural work. When it was time for Bronius to start school, Ignas and Ona were wealthy enough to pay for his education. So Bronius, together with his other siblings, attended Vaškai primary school. Before starting his schooling Bronius had already learnt how to read and count, so his teacher advised him to entry directly into second grade. He began his primary schooling in 1942, moving on to middle school in Vaškai in 1944.

However, difficult historical circumstances started affecting the family's life. In 1940 Russia occupied Lithuania and Bolsheviks began repressions against teachers and intelligentsia (educated people): one teacher from Bronius's school was deported to Siberia, and another was executed. People hid from the government terrors and moved from cities to villages. A year later German forces, which were no better than Russians, invaded and began controlling Lithuania. The Germans visited farms (including Bronius's home) and nationalized their property, such as animals or crops. After such repressions by the government, Bronius's family lost much of their income, and hence after Bronius graduated from Vaškai middle school his parents did not have the money to pay for his further education. For a year Bronius had helped his father to work on a farm, then went to live at the home of his aunt in the town of Žeimelis until he finished high school.

When Bronius was asked about the moment he realized he had a talent for mathematics, he said that he felt extremely thankful for his teachers. According to Bronius, at Žeimelis High School which he entered in 1949, he had a wonderful mathematics teacher Motiejus Gudynas who used to give separate tasks for students according to their abilities. He noticed that Bronius and his friend Vincentas Dienys (now Dr. habil. in physics) were talented students, so he encouraged them to prepare to take part in the mathematical olympiads. Together with Dienys, Bronius participated in national mathematical olympiads, in which Bronius took second place when he was in 10th grade and first place in 11th grade in 1954 [4]:-

The winner of the competition received a special prize, an impressive trip to Kiev, the city where he was destined to return later in his life.

While Bronius was studying in school, all of his classmates had joined the Komsomol (a political youth organization in Soviet Russia). He was the only boy in his class who was not part of that organization, even though the government strongly encouraged everyone to join.

In 1954 Bronius graduated from Žeimelis High School with a Silver Medal (the second highest honour in the Soviet Union). He had no doubt what he wanted to study. Without the need to take any entrance examinations he was admitted into Vilnius University's Physics-Mathematics faculty to study mathematics. Bronius's brother Stasys had given him some of his books and lecture notes from the earlier mathematics courses before he began his studies, because he had previously been a mathematics first year student himself. While studying, Bronius became a mathematics tutor for younger students who were struggling with the subject. He did this as a means of earning a living throughout his time as an undergraduate. He also sang in the University men's choir. In his second year he joined a probability theory and number theory extracurricular club, organized by professor Jonas Kubilius. His first task was to analyze a book on mathematical statistics and explain it to his fellow classmates. While reading the book Bronius became very curious about probabilistic number theory and later wrote his first scientific paper The distribution of values of arithmetic multiplicative functions (Lithuanian) (which was published in 1960) for his bachelor's thesis. During his five years of studying he passed all his examinations at the highest possible grades and in 1959 he graduated from Vilnius University with honours.

Following graduation, he was given a position at the Institute of Physics and Mathematics (it has since been renamed to the Institute of Mathematics and Informatics) at the Academy of Sciences. Bronius continued his education as a post-graduate student. His scientific advisor became professor Boris Vladimirovich Gnedenko from the University of Kiev and he went to Ukraine to write his PhD thesis. When Gnedenko returned to the Lomonosov Moscow State University in 1960, Bronius had to go with him to Moscow. In Russia he met a lot of like-minded academics, who were also sceptical about Communist ideas and were not part of the political party. Bronius had a great opportunity to participate in various special mathematical courses and scientific seminars, where he gained knowledge about superharmonic functions and supermartingales. He also attended a seminar on Markov Processes by Eugene Borisovich Dynkin, which later on became an additional topic for his research. Bronius was interested in studying the theory of probability, measure and integral theory and mathematical statistics. His second paper written in 1962 was titled On the asymptotic expansion of the remainder term in case of convergence to the Poisson law (Russian). In total Bronius published five papers that year, all written in Russian, on topics such as the limit theorem and Poisson processes. After three years of studying at Lomonosov Moscow State University, in 1963 he defended his PhD thesis Limit Theorems for Sums of Step Random Processes. At that time Bronius became extremely interested in the theory of random processes and modern probability theory, so he continued his research on these topics and in 1966 he published On the Stefan problem and optimal stopping rules for Markov processes (Russian). Two following papers were also related with optimal stopping of Markov processes, the second one being The optimal stopping of Markov processes (Russian), which was reviewed by John Leighton Denny:-

The author extends his earlier work with A N Sirjaev [Teor. Verojatnost. i Primenen. 11 (1966), 612-631] on the equivalence of the generalized Stefan problem to the problem of finding optimal stopping times for homogeneous Markov processes. The above cited work contains results for Markov processes with continuous paths and this paper obtains analogous results for discontinuous paths. As an application, the problem of testing a simple hypothesis against a simple alternative in a Poisson process is considered.

In 1968 Bronius defended his thesis for the degree of doctor of physical and mathematical sciences (now, habilitated doctor) on Studies of random processes (optimal stopping, effective markovity criteria) [4]:-

It is worth mentioning, that Bronius was the youngest habilitated doctor in Lithuania at that time. In 1970 he became the head of the mathematical statistics section of the Institute and after a year he wanted to become a member of the Lithuanian Academy of Sciences, but since he was not in the Communist party, he was not allowed. Despite these difficulties, he was happy about his decision not to join the Communist party. When later he was asked about this topic Bronius answered [5]:-

No, I did not lose anything, I just won, because I saved my freedom of thought. They did not let me go to America. But they would let me go to other countries. I was sent personal invitations, also the travel expenses were paid. Without any restrictions I could participate in the mathematical symposiums, which were held in USSR. There I could meet and talk to people from abroad.

In the late 1980s Lithuanians wanted to regain their independence and for this purpose formed the Reform Movement of Lithuania, officially known as Sąjūdis. In the book Lietuvos istorija (2013) written by Alfonsas Eidintas, Alfredas Bumblauskas, Antanas Kulakauskas and Mindaugas Tamošaitis it is said that [1]:-

The organisation was open for every Lithuanian to join and everyone could participate in the events they organise. Every participant could feel, that he is responsible for the future of Lithuania.

As a lecturer, Grigelionis was especially liked by his students. According to his former student Vilijandas Bagdonavičius (born 1949), Grigelionis was very concise and emphasized the importance of proofs. The best students on the course wanted to be taught by the professor, however only two of them could get him as their scientific advisor. In total nineteen of Grigelionis' students defended their PhD thesis and six of them became habilitated doctors. Nowadays you can meet former Grigelionis students giving lectures at almost every international conference on random processes and probability theory.

Bronius met his future wife Ona Jurgaitytė at his sister's wedding. Later on the couple got married on 25 July 1965 and had two children. His wife started working as a teacher after her studies, and also took on all of the housekeeping duties in her free time, as well as raising their children, Gintautas (born 24 March 1967) and Milda (born 9 May 1972). Gintautas studied physics at Vilnius University and later at the Royal Institute of Technology in Sweden. He was awarded a doctorate in theoretical physics. Milda studied psychology at Vilnius University where she was awarded a Master's Degree.

Grigelionis always had strong moral principles and was patriotic. Besides his scientific career, he never forgot about his native area Pasvalys and together with his colleague Antanas Apynis was keen on organizing mathematics olympiads where young mathematicians from Pasvalys would strive to win the Cup of Grigelionis. The olympiads continued to take place after his death.

His book Student's t-distribution and related stochastic processes was published in 2013. It is a short work of 99 pages and Grigelionis gives the following summary:-

This brief monograph contains a deep study of the infinite divisibility and self-decomposability properties of central and non-central Student's distributions, represented as variance and mean-variance mixtures of multivariate Gaussian distributions with the reciprocal gamma mixing distribution, respectively. These results permit to define and analyse Student-Lévy processes as Thorin subordinated Gaussian-Lévy processes. Analogously, Student-Ornstein-Uhlenbeck-type processes are described. A wide class of one-dimensional strictly stationary diffusions with the Student's t-marginal distribution is defined as the unique weak solution for the stochastic differential equation. Extreme value theory for such diffusions is developed. A flexible and statistically tractable Kolmogorov-Pearson diffusions are also described. Using the independently scattered random measures, generated by the bivariate centred Student-Lévy process, and stochastic integration theory with respect to them, it is defined as an univariate strictly stationary process with the centred Student's t marginals and the arbitrary correlation structure. As a promising direction for future work in constructing and analysing of new multivariate Student-Lévy type processes, the notion of Lévy copulas and the related analogue of Sklar's theorem is explained.

Let us end this biography with this tribute to Grigelionis from [4]:-

The entire life of Bronius Grigelionis was devoted to Lithuania and the science of mathematics. Here is a quotation from a book "Bronius Grigelionis" compiled by A Apynis in 2005 on the occasion of the 70th anniversary of the Academician:

Whatever the definition of mathematics is, queen or servant of sciences, and whatever the country or the epoch is, the standard of mathematical culture marks significantly the overall standard of culture. By cherishing and fostering mathematical skill like a divine gift, we amplify the greatest treasure of the nation, its intellectual potential, which allows us to stand proudly side by side with civilized nations.

These words should inspire us to remember this great person, whereas young people should be encouraged to continue his work.

Other Mathematicians born in Lithuania

Other websites about Bronius Grigelionis: