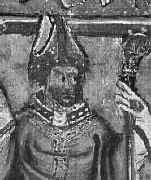 Robert Grosseteste was educated at Oxford University. He became Chancellor of Oxford University in 1215 remaining in this post until about 1221. After this he held a number of ecclesiastical positions, then from 1229 to 1235 he was a lecturer in theology to the Franciscans.

Grosseteste worked on geometry, optics and astronomy. In optics he experimented with mirrors and with lenses. He believed that experimentation must be used to verify a theory by testing its consequences. In his work De Iride he writes:-

This part of optics, when well understood, shows us how we may make things a very long distance off appear as if placed very close, and large near things appear very small, and how we may make small things placed at a distance appear any size we want, so that it may be possible for us to read the smallest letters at incredible distances, or to count sand, or seed, or any sort or minute objects.

Grosseteste realised that the hypothetical space in which Euclid imagined his figures was the same everywhere and in every direction. He then postulated that this was true of the propagation of light. He wrote the treatise De Luce Ⓣ on light.

In De Natura Locorum Ⓣ he gives a diagram which shows light being refracted by a spherical glass container full of water.

Grosseteste also made Latin translations of many Greek and Arabic scientific writings. He wrote a commentary on Aristotle's Posterior Analytics and Physics and many treatises on scientific subjects including De Generatione Stellarum, Theorica Planetarum Ⓣ and De astrolabio Ⓣ. In an astronomy text he claimed that the Milky Way was the fusion of light from many small close stars.

Other pages about Robert Grosseteste:

Other websites about Robert Grosseteste: