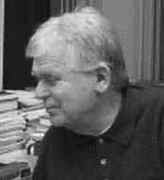 Peter Ladislaw Hammer was for a while known as Peter Ivanescu. We will explain below how this came about, but for the moment we record that papers written by Peter Hammer and Peter Ivanescu are by the same person.

Peter Hammer was born in Timișoara which had been allocated to Romania by the Treaty of Trianon in 1920 which concluded World War I and deprived Hungary of two-thirds of its previous territory. However, he was born into a Hungarian family. He studied mathematics in the Mathematics and Mechanics Department of the University of Bucharest and was awarded his Diploma in 1958 after writing the dissertation Groups with Finite Classes of Conjugate Elements. He published the two papers Infinite Rings with Finite Factorizations and Shefferian Algebras in 1959. The first of these was reviewed by L Fuchs who described the contents as follows:-

Let R denote an infinite associative ring with unity, with the property that every proper factor ring of R is finite. If the intersection of maximal ideals of R is zero, then R is a commutative domain of integrity and every non-zero ideal of R may be written uniquely as a product of single-primed (einartig) primary ideals which are coprime to each other.

The second paper on Shefferian algebras studies abstract algebras which arise from studying addition and multiplication on digital computers. They are related to Boolean algebras and Hammer investigated the connections in this paper. There followed a series of papers, typical of which are Linear Programming and Transportation (1960), Applications of Mathematics to Economics (1960), Optimization of the Development Plan of an Industry (1961), and A Method for Solving Transportation Problems (1961). In 1961 he married Anca Ivanescu and at this time he adopted his wife's name and published papers such as Pseudo-Boolean programming and applications which was presented to the Colloquium on Mathematics and Cybernetics in the Economy, Berlin, in October 1964 under the name Petru L Ivanescu. Let us note that Anca and Peter had two children, Alexander and Maxim.

In 1967 Hammer and his wife defected to Israel where he was appointed professor at the Technion in Haifa. In the following year he published a joint text with Sergiu Rudeanu entitled Boolean methods in operations research and related areas. G Berman writes:-

This book is a comprehensive account of the applications of Boolean methods, with the exception of the applications to switching theory, which have been developed during the past decade. A large part of the book is based on results previously published by the authors as research papers.

Peter's appointment at Rutgers University was not a simple move of a professor from one institution to another. When Peter was invited to join Rutgers 20 years ago, he was given the task of establishing an Operations Research centre. Peter certainly delivered - RUTCOR was established and is now one of the more active Operational Research centres in the world, with about 10 in-house faculty members, dozens of Ph.D. students and many visitors. RUTCOR played a major role in attracting the US National Science Foundation to house world-renowned DIMACS at Rutgers. I doubt that the Rutgers administration knew what they were getting into when they recruited Peter.

RUTCOR played a major role, with Hammer as its director, with regular series of seminars, workshops, and courses put on for the numerous graduate students. There was always an exciting atmosphere as enthusiastic visitors interacted with the staff and students of the Center. He remained as director of RUTCOR from its foundation until his death in a car accident. Hammer's scientific contributions are summarised in [3]:-

Most of Peter Hammer's scientific production has its roots in the work of George Boole on propositional logic. More than anyone else, Peter Hammer has used and extended Boole's machina universalis to handle questions relating to decision making, analysis and synthesis as they arise in natural, economic and social sciences. Over the span of his scientific career, he has conducted eclectic forays into the interactions between Boolean methods, optimization, and combinatorial analysis, while adapting his investigations to the most recent advances of mathematical knowledge and of various fields of application. Among the main research topics which have received his attention, one finds an impressive array of methodological studies dealing with combinatorial optimization, some excursions into logistics and game theory, numerous contributions to graph theory, to the algorithmic aspects of propositional logic, to artificial intelligence and, more recently, to the development of innovative data mining techniques.

His contributions, however, extended well beyond his research achievements [5]:-

Peter Hammer was not only an outstanding scholar and a tireless organizer, but also a kind, generous and humorous human being. He relished the interaction with students and colleagues, and made everybody feel comfortable to work with him, be it on a mathematical question (which he was always keen to formulate) or on planning a conference. He supervised numerous graduate students with respect and fatherly understanding, considering each one of them as his "best student".

Hammer received many honours for his outstanding contributions including honorary degrees from the Swiss Federal Institute of Technology in Lausanne (1986), the University of Rome "La Sapienza" (1998), and the University of Liege (1999). As we mentioned above he was awarded the George Tzitzeica prize of the Romanian Academy of Sciences (1966), but he also received the Euler Medal of the Institute of Combinatorics and its Applications (1999). He was elected a Fellow of the American Association for the Advancement of Science in 1974, and was a Founding Fellow of the Institute of Combinatorics and its Applications.
Other Mathematicians born in Romania

Other pages about Peter Ladislaw Hammer:

Other websites about Peter Ladislaw Hammer: