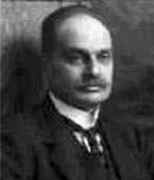 Friedrich Hartogs was known as Fritz to his friends and colleagues, and in fact even wrote mathematics papers under the name Fritz Hartogs. His parents were Elise Feist and Gustav Hartogs, who was a businessman. Despite being born in Brussels, Hartogs' family were German Jews and he was brought up in Frankfurt am Main in Germany. He attended the Realgymnasium Wöhlerschule in Frankfurt, graduating from the high school in the spring of 1892, a few weeks before his eighteenth birthday.

At this time the standard university career for German students involved moving between different institutions and Hartogs followed this route. First he spent a semester at the Technical College at Hanover, followed by a semester at the Technical College in Berlin. He then matriculated at the University of Berlin where he was taught mathematics by, among others, Georg Frobenius, Lazarus Fuchs and Hermann Schwarz, and he attended physics lectures by Max Planck. In 1900, while still a student at the University of Berlin, Hartogs married in Hamburg; the couple had four children. Following his studies at the University of Berlin, he then went to the University of Munich where he attended courses by Ferdinand von Lindemann and Alfred Pringsheim. It was in 1901 that Pringsheim became a full professor at Munich and he became Hartogs's thesis advisor. Hartogs submitted his thesis Beiträge zur elementaren Theorie der Potenzreihen und der eindeutigen analytischen Funktionen zweier Veränderlichen Ⓣ to the Ludwig-Maximilians-Universität Munich in 1903 and was awarded his doctorate with distinction in July of that year. He continued to work towards habilitating at Munich which he did two years later after writing the paper Zur Theorie der analytischen Funktionen mehrerer unabhängiger Veränderlichen, insbesondere über die Darstellung derselben durch Reihen, welche nach Potenzen einer Veränderlichen fortschreiten Ⓣ . The 90-page paper was published in Mathematische Annalen in 1906.

Following the acceptance of his habilitation thesis, Hartogs became a privatdozent at the University of Munich. In session 1909-10 he taught Abraham Fraenkel who, years later, wrote in his memoirs that Hartogs was by nature a consistently shy and a rather anxious person. Perhaps for this reason he was only promoted slowly when the outstanding quality of his research would suggest that he might have risen more rapidly through his profession. He became an extraordinary professor in 1912, then ten years later was offered a full professorship at the University of Frankfurt. This chair had become vacant when Arthur Schönflies retired after eight years of service. Hartogs was indeed a very cautious person and he turned down the offer of this chair because, in the difficult financial climate of the time with hyperinflation gripping Germany, he did not feel confident that a privately owned institution, which the University of Frankfurt was, offered the security that he required to support his wife and four children. In a letter explaining his decision he wrote [3]:-

... [since] the professors of the University of Frankfurt legally have no claims on the state, but only have claims on the University of Frankfurt, ... it seemed to me that under the current uncertain internal and foreign policy relationships, which threaten to worsen daily, this decision was by no means worry-free, and as a head of household, I would feel guilty if I were to let the great advantages of by the position offered in Frankfurt blind me to the issue of material safeguards affecting my family ...

At Frankfurt, Hartogs had several outstanding colleagues. Oskar Perron was appointed to a professorship in 1922, Constantin Carathéodory was appointed in 1924 to fill the chair left vacant when Ferdinand von Lindemann retired, and Heinrich Tietze was appointed in 1925. These three professors all made representations to the university arguing that Hartogs be appointed to a full professorship and in 1927, five years after turning down the full professorship at Frankfurt, he had at last reached the top of his profession. Like all Jewish academics, after the Nazi Party came to power in 1933 Hartogs' life became increasingly difficult. Hitler came to power on 30 January 1933 and on 1 April, so-called 'Boycott Day', Jewish shops were boycotted and Jewish professors and lecturers were not allowed to enter the university. On 7 April the Nazis passed the law which, under clause three, ordered the retirement of civil servants who were not of Aryan descent, with exemptions for participants in World War I and pre-war officials. Hartogs had held an appointment before World War I which qualified him as a civil servant so at this stage he retained his professorship. An attempt by the students at the University of Munich to unseat him was not successful as the Bavarian Secretary of Cultural Affairs upheld the conditions of the law and retained Hartogs.

This little victory for Hartogs was only temporary, however. On 15 September 1935, at a convention in Nürnberg, two measures were approved by the Nazi Party which removed rights from Jews. The consequences for Hartogs were swift for, on 22 October, he was forced to retire from his professorship. At first he was able to retain contacts with colleagues and visited the university on a number of occasions. This came to an end when residents of the block of flats where he lived reported to the authorities that he was being visited by German colleagues. To continue with their visits would have meant that his colleagues would suffer severe consequences, so Hartogs became completely isolated. On 10 November 1938, so called 'Kristallnacht', the Nazi gangs attacked Jews and Jewish property. The police were told not to arrest the attackers but rather to arrest the Jews who were being attacked. Around 30,000 Jewish men were arrested and taken to concentration camps. Hartogs was one of those arrested and he was taken to the Dachau concentration camp. After being held for several weeks during which he was appallingly treated he was released.

Hartogs had always done his utmost to protect his family as we have already seen with his decision not to accept the chair at Frankfurt in 1922. He realised in 1933 that his house in the Grosshesselohe, in Munich, could be seized by the authorities so he had made it over to his wife at this time. Hartogs' wife was a Aryan so he hoped that this would ensure that their home was safe. It became clear after the Nürnberg laws of 1935 that this was not sufficient to protect the house since his wife, through marriage to a Jew, would have been liable to having the home confiscated and being sent to a concentration camp. In 1941 the Nazis introduced the compulsory yellow star badge that identified the wearer as a Jew causing Hartogs further distress. It was in 1941 that Hartogs and his wife were given advice by a lawyer that in order to protect Hartogs' wife she should divorce him. This was a painful process for Hartogs and the process was deliberately drawn out to be as lengthy as possible. In early 1943 the divorce was finalised but Hartogs continued to live in his wife's house and the authorities turned a blind eye. The indignity and humiliation that Hartogs had suffered for ten years finally became too much for him and in August 1943 he took his own life by taking an overdose of barbiturates.

Hartogs is best known for his results on the representation of analytic functions of several variables by means of power series. In particular 'Hartogs' Theorem', which he included in his habilitation thesis and the resulting major 1906 paper, concerns the removability of compact singularities for holomorphic functions in n>1 complex variables. Daniele Struppa writes in [4]:-

When Hartogs originally proved this result, the mathematical community regarded it as one of the most striking facts of the theory of several complex variables, and even now Hartogs' discovery is still regarded as a quite basic reason for the differences between analysis in C and analysis in Cn, and its many possible generalizations have since intrigued many mathematicians.

One special case of Hartogs' Theorem is known as 'Hartogs' Ball Theorem' which shows that any holomorphic function on an annular region of complex space of dimension greater than 1 can be extended to the disk containing that annulus. In [3] there is a brief description of further contributions by Hartogs:-

Likewise, his name lives on in the Hartogs figure, which represents the simplest example of a region which is not a domain of holomorphy, and in Hartogs domains (convergence ranges for certain series). He further proved the important fact that a function of several complex variables is holomorphic if it is holomorphic in each variable separately; this result is particularly striking because the corresponding statement for real variables is totally false. Through his contributions to several complex variables, Hartogs became the founding father of the theory of complex analysis in several variables.

Other websites about Friedrich Hartogs: