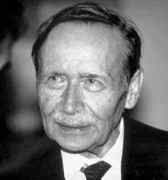 Let us note at the beginning of this article that Edmund Hlawka's name appears in this form on all documents we have seen except one, where his name is given as Edmund Rudolf Hlawka. This is an official document which we believe to be correct but as he appears never to have used his middle name, or even its initial, we have simply listed him as Edmund Hlawka.

Edmund Hlawka was born in Bruck an der Mur but his parents moved to Vienna when he was a young child so it was in that city that he was brought up and educated. He attended both primary and secondary school in Vienna and while he was still at school he began to read quite advanced mathematics textbooks [3]:-

In a short account of his youth he writes about a large table in the living room of his parents where he often worked at that time, and remarks that later on, after his apartment had been bombed during the war, he for a while had to work at kitchen tables. Although a very good student of mathematics at the Realgymnasium (a type of school between the more technically oriented Realschule and the humanistic Gymnasium), where he sometimes prepared the homework for all the other students, he first did not plan to study mathematics. He was more interested in chemistry. But formulas involving derivatives in chemistry books intrigued him so much that he turned to mathematics after all.

Hlawka graduated from the Gymnasium in 1934 and later that same year he entered the University of Vienna where he studied mathematics, physics and astronomy. He attended mathematics courses by, among others, Wilhelm Wirtinger, Philipp Furtwängler, Karl Menger and Nikolaus Hofreiter (1904-1990). He took a course on mathematical logic given by Kurt Gödel and was taught theoretical physics by Hans Thirring (1888-1976). It was the number theory that he was taught by Nikolaus Hofreiter that interested Hlawka most and he undertook research for his doctorate advised by Hofreiter.

Hofreiter was a young mathematician who had undertaken research in Vienna advised by Philipp Furtwängler, obtaining his doctorate in 1927 for his thesis Eine neue Reduktionstheorie für definite quadratische Formen Ⓣ. After qualifying as a Gymnasium teacher and teaching in Vienna for his probationary year, Hofreiter had become Furtwängler's assistant in 1929. He habilitated in 1933, the year before Hlawka began his studies at the University of Vienna. In 1938 Hlawka was awarded his doctorate for his thesis Über die Approximationen von zwei komplexen inhomogenen Linearformen. Ⓣ

Before the award of his doctorate, Hlawka began publishing papers. His first was Eine asymptotische Formel der Laguerreschen Polynome Ⓣ, a paper on Laguerre polynomials, which was published in 1935, only a year after he began his university studies. His next publication was Über asymptotische Entwicklungen von Lösungen linearer Differentialgleichungen 2. Ordnung Ⓣ (1937) was on linear differential equations of the second order. His next two papers were on number theory, Über die Approximation von zwei komplexen inhomogenen Linearformen Ⓣ (1938) and Über die Approximation von inhomogenen Linearformen Ⓣ (1938). These study approximation properties of two inhomogeneous linear forms in two variables and generalise results obtained by Hermann Minkowski.

After the award of his doctorate, Hlawka remained at the Mathematical Institute of the University of Vienna where he was employed as a research assistant. In 1941 he was promoted to assistant and then in 1944 he habilitated with his thesis Zur Geometrie der Zahlen Ⓣ in which he proved a long-standing conjecture of Hermann Minkowski which today is known as the Minkowski-Hlawka Theorem. The successful habilitation put him on a firm financial position and allowed him to marry Rosa Reiter, a fellow student of mathematics who became a secondary school teacher of mathematics.

At this stage in his career, World War II was still taking place but after it ended in 1945, Hlawka gained international acclaim for his work on the geometry of numbers and he received many invitations to lecture abroad. Hlawka, however, did not like travelling and so he turned down most of the invitations and continued to work at the University of Vienna. He was promoted to full professor in 1948, a position he held until he left the University of Vienna in 1981.

Now there was one invitation for an extended research visit that Hlawka did not want to turn down, namely an invitation to the Institute for Advanced Study at Princeton in the United States. He spent the fall semester of 1959 there, arriving at the Institute in September 1959 and remaining there until the end of December. He twice served as Dean at the University of Vienna, first as Dean of the Philosophy Faculty in 1955-56, three years before his visit to the Institute for Advanced Study, and then as first Dean of the newly formed faculty of Natural Sciences in 1976-77.

Long after his retirement in 1987, Hlawka remained a scholar, writing numerous works, often related to his old love of theoretical physics, and went to his office almost daily. This connection to his place of work, which he had to give up for health reasons only during the last four years of his life, also helped him cope with the death of his wife Rosa in 1991, a student colleague he had married in 1944 and whom had taken on many of the practical burdens of life.

Wolfgang Schmidt relates some personal memories of Hlawka in [3]:-

As a first year student in 1951/52 I was deeply impressed by Hlawka's Vorlesung (lecture course) on differential and integral calculus. With him, the epsilon and delta arguments were enjoyable to learn. He always lectured without notes. Except that sometimes he wrote specific numbers for examples on the back side of streetcar tickets. He once told us with a grin that he could not proceed because the conductor had punched a hole in his ticket just where he had written such a number. He had a great sense of humour, especially a Viennese type of humour. Using a commonly known phrase, when he made a mistake at the blackboard he once said he was a "Kipfel" (the Austrian version of croissant). He clearly enjoyed teaching and had the habit to continue lecturing after he had left the room. He was admired by all the students. He was rather thin, looked frail, and we worried about his health. But he fooled us all: He outlived most of his more robust colleagues. At first I had intended to study mathematical physics. So when Hlawka gave a course on the 'Geometry of Numbers' I enrolled in a physics course. But on the side I studied notes of Hlawka's lectures, taken by my fellow student Hans Hejtmanek. I liked these lectures on the 'Geometry of Numbers' so much that I decided to get my degree in mathematics, and eventually I got my Ph.D. under the direction of Hlawka. While I was still a student, he and his wife accepted me in their very informal mathematical circle, which involved numerous seminars and Nachsitzungen (after-sessions) in coffee houses. Always a very colloquial Viennese language was spoken. I felt very honoured to be allowed to address him by his first name Edmund, and by "du" instead of the more formal "Sie". There is much that I owe to Hlawka. He introduced me to the Geometry of Numbers and to Uniform Distribution, areas which have been important in my own work.

Peter Schmitt also writes about Hlawka as a teacher [4]:-

Edmund Hlawka was not only an outstanding scientist of international standing, but also - as more than 800 teacher's examinations prove - a successful and popular teacher, who was able to engender enthusiasm among his students for the discipline, which for many was nevertheless tricky.

The Selecta (1990), published shortly after he retired, has the following description [1]:-

Edmund Hlawka is a leading number theorist whose work has had a lasting influence on modern number theory and other branches of mathematics. He has contributed to Diophantine approximation, the geometry of numbers, uniform distributions, analytic number theory, discrete geometry, convexity, numerical integration, inequalities, differential equations and gas dynamics. Of particular importance are his results in the geometry of numbers (especially the Minkowski-Hlawka theorem) and uniform distribution. This 'Selecta' volume contains his most important articles, many of which had not been easily accessible. It will provide a useful tool for researchers and graduate students working in the areas covered. Edmund Hlawka has contributed a general introduction.

Our final quote is from the Foreword of [2]:-

Edmund Hlawka is the most famous living Austrian mathematician and a prominent university teacher in Vienna. He contributed important theorems to the geometry of numbers, to the theory of uniform distribution, and to numerical integration. In this book, the editor attempts to summarize Hlawka's results from 1935 to his 85th birthday in 2001. The book can also be considered as an introduction to a comprehensive review which still seems to be missing, on the history of Austrian mathematics in the 20th century.

Other Mathematicians born in Austria

Other websites about Edmund Hlawka: