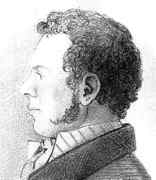 Bernt Holmboe was the son of the priest Jens Ottesen Holmboe (25 March 1746-24 April 1823) and his wife Cathrine Holst (4 May 1763-25 April 1823). Jens, whose father Otto Holmboe (1710-1773) had also been a priest, had been the incumbent at Vang for three years before Bernt was born. Bernt's mother Cathrine was gentle and loving but suffered from poor health and later in life was often confined to bed. Jens and Cathrine had seventeen children and Bernt was one of nine who reached adulthood. The boys were, starting from the eldest, Otto (1786-1858), Hans (1787-1844), Bernt Michael, Christopher Andreas (1796-1882), Henrik Ancher (1798-1856) and Hans Peder (1804-1841). Otto became a merchant, Hans became a priest, and Christopher Andreas studied mathematics but became a professor in oriental languages at the University of Oslo. Two of Bernt's elder sisters, Maren Ancher (born 1790) and Elen Gunhilde (born 1794) married sons of Jacob Wilse who had been the parish priest at Eidsberg; Jens Holmboe left Vang to succeed Jacob Wilse at Eidsberg in 1801. Bernt was six years old when the family moved to Eidsberg, a town about 50 km southeast of Christiania (renamed Oslo in 1925). He did not attend school in Eidsberg, however, but was tutored at home until he reached the age of fifteen when he was sent to the Cathedral School of Christiania. This famous school, founded in 1153, had originally educated boys who were to become priests in the Roman Catholic Church. All teaching had been in Latin but a few years before Holmboe studied there major changes had taken place: teaching was in Norwegian and specialist subject teachers were employed. He spent four years at the Cathedral School during which time he studied mathematics at a higher level than the normal course required. He graduated from the Cathedral School in 1814 and matriculated as a student in the Royal Frederick University of Christiania.

The Royal Frederick University (Det Kongelige Frederiks Universitet) had only opened in Christiania in 1813 after the Danish King Frederick VI granted Norway the right to its own university in 1811. The first idea was to put the university in Kongsberg but in 1812 the plans were changed and buildings were rented in Christiania. Only after Holmboe's death did the university move into its own buildings (in 1852). When Holmboe began his studies there he was one of only seventeen students, taught by six lecturers. His university career did not begin in a very calm way due to the political situation at the time. Norway and Denmark had been united from the end of the fourteenth century but the Napoleonic wars between England and France saw Norway blockaded from 1807, causing much hardship. Many Norwegians felt that the country needed its own voice but, after the defeat of Denmark by Sweden in 1813, Denmark handed Norway over to Sweden. At this point the Norwegians declared independence but this provoked Sweden to attack them in July 1814. Holmboe was the leader of the students who were strongly opposed to Swedish troops in the country in the short fourteen-day military campaign.

In 1815 Holmboe was appointed as assistant to the astronomer Christopher Hansteen at Christiania. In this year Hansteen, in addition to his university duties, became director of the Christiania Observatory and the editor of the Norwegian almanac. He needed a good mathematician to assist him with his mathematical calculations and Holmboe certainly filled this role. In 1818 Holmboe became a teacher at the Cathedral School of Christiania. Hans Peter Bader, the teacher of mathematics at the Cathedral School had been dismissed in December 1817 [2]:-

The School's reputation had fallen into disrepute. ... in the midst of the critical situation in which the School found itself right before Christmas, 1817, Rector Rosted was forced to hire two more of his former bright students: Bernt Michael Holmboe and Johan Aubert. It was the twenty-three year old Holmboe who now succeeded Bader in the teaching of mathematics. ... [He] quickly became an inspirational feature of the School.

In fact Jacob Rosted first offered the mathematics teaching position to Christopher Andreas Holmboe who was trained in the subject but by this time he had decided to make a career in oriental languages so turned down the offer. Bernt Michael was then offered the post and he gladly accepted; in fact he was well suited to a teaching position [2]:-

Holmboe ... had received a little teaching experience at the newly-opened Institute of Commerce, and above all, he had a well-thought-out view of what mathematics really was and how best it could be learned.

In his first year teaching at the School he became the mathematics teacher of Niels Henrik Abel who had been a pupil there since 1815. All agree that Holmboe's teaching was the first step in making Abel a world-class mathematician, so it is reasonable to look briefly at the way in which he taught [2]:-

It was the unique symbols that divided mathematics from all the other sciences. Therefore it was essential that these symbols be learned through drills, and that the teacher, through constant repetition, train the disciples to see the significance of notation. ... Before Holmboe undertook anything, he therefore got the students to repeat in words what the mathematical statement expressed; and vice versa: when the pupil heard a proposition expressed in words, he had to learn to write it down in mathematical notation. Holmboe stressed that the teacher had to prepare the foundations by which the beginner could easily learn without too great an effort, by not moving forward too quickly, not working at too abstract a level and going lightly over the most difficult propositions until everything contained therein had been learned.

When Holmboe wrote a report on his pupil Abel in June 1820 he was fully aware of his potential, writing [2]:-

With the most incredible genius he unites ardour for and interest in mathematics such that he quite probably, if he lives, shall become one of the great mathematicians.

It is interesting that Holmboe first wrote "the world's greatest mathematician", then replaced it with the more modest "one of the great mathematicians". It is also interesting to note that Holmboe was fully aware of Abel's health problems at this time. The relation between Holmboe and Abel went well beyond one of teacher-pupil. The two became close friends but Abel also got to know Holmboe's family, particularly three of his brothers: Christopher Andreas taught Hebrew at the University, Henrik Ancher worked in the chemistry laboratory at the University and Hans Peder took some of the same classes as Abel. He was invited to the Holmboe home in Eidsberg on a number of occasions, in particular spending a very happy time there at Christmas 1821.

Holmboe published the first volume of Laerebog i Mathematiken Ⓣ in 1825. Two years later he published the second volume. These textbooks were based on Holmboe's highly successful teaching methods described above and were very successful being reprinted in different forms. Not everyone, of course, agreed with his ideas on teaching mathematics and between 1835 and 1838 Christopher Hansteen published textbooks for schools on geometry and mechanics. When the first of these texts appeared, Holmboe wrote a review for the newspaper Morgenbladet in which he advised schools not to use Hansteen's books; strong words to put in a review of work by a colleague. There followed a debate on mathematics teaching in schools which almost certainly was helpful in improving the way the subject was taught. It is worth recording that Holmboe's books have proved much more successful than those of Hansteen.

In 1826 Holmboe accepted a position as lecturer at the University of Christiania, a move which some have criticised since this might have been a possible post for Abel. The committee making the appointment to the lectureship did, however, consider both men for the position [2]:-

... they considered that there were two men well-qualified for the position, Head Teacher B M Holmboe, and Student N H Abel. On Holmboe, the report stated that for many years now he had "exhibited remarkable competence" and showed an "extensive and well-founded knowledge of mathematics." On Abel, it acknowledged his "rare talent for mathematics and his great future in this science," but not was also taken of the fact that at this moment he had begun a lengthy journey abroad, that he could not easily be called back without harm, and that ... "he would not with ease be able to adapt himself to the younger students' ability to conceptualise, and thus, not bear fruit in terms of lecturing in the elementary levels of mathematics ..."

Abel did not seem to resent Holmboe's appointment in any way as he remained firm friends with him. From 1826 to 1850 Holmboe also lectured at the military academy in Christiania. In 1834 he was appointed to the chair of pure mathematics at the University. During the years 1828-30 Holmboe lectured on astronomy since Hansteen was absent on a geomagnetic expedition to Siberia.

Over six months after Abel's death in April 1829, Holmboe's obituary of Abel was published [2]:-

Holmboe apologised for the obituary not appearing sooner, explaining that he had been abroad, the printing had been delayed, and that he had waited before writing to be sure that he could avail himself of the opinions of foreign mathematicians about Abel's importance and his achievements. Holmboe wanted his obituary to show Abel's incomparable gifts and contributions to mathematics and the admiration that this inspired in the great wide world.

However, there is a puzzling aspect to this obituary which Stubhaug points out [2]:-

Holmboe had been both teacher, friend and confidant to Abel. During Abel's grand tour it was Holmboe who most frequently received letters. One would have thought that Holmboe was the person most capable of explaining who Niels Henrik really was. But he did not want, did not manage, or perhaps thought it was unseemly, to say anything about how he saw and experienced Niels Henrik Abel in his full human dimensions. One possible explanation is that at that time one found a set of norms and traits of character that any respectable and educated man practised as a matter of course, and where nothing of an emotional nature was expressed; indeed, the fulfilment of these norms was taken for granted. In light of this attitude, Holmboe's rather bloodless obituary would not be surprising had it not been for the reactions of other Abel friends.

On 14 June 1834, Holmboe married Nikoline Antonie Finkenhagen on her thirtieth birthday. They had three daughters: Fredrikke Cathrine (born 1835), Hanne Elisabeth (born 1836) and Nikoline Antonie (born 1839), and a son who was stillborn. Hanne died at the age of two but the other two daughters lived full lives. Sadly Holmboe's wife died in 1839, about two weeks after the birth of Nikoline Antonie. Holmboe married Ingeborg Cathrine Hannestad on 15 December 1842; like his first wife she was thirty years old although the marriage was not on her birthday. Holmboe and Ingeborg had four children: Christopher Gotthard (born 1843), twins Cathrine and Jens (born 1846), and Olava Sophie (born 1849). Only the twins reached adulthood, Christopher dying at age eleven and Olava dying at age five.

In the later part of his career, Holmboe used his mathematical talents in the insurance industry. He had two separate involvements; from 1832 to 1848 he was a member of the national body set up to supervise insurance companies, and from 1847 until his death he was a director of the insurance company Gjensidige.
Quotations by Bernt Holmboe
Other Mathematicians born in Norway
A Poster of Bernt Holmboe

Other websites about Bernt Holmboe: