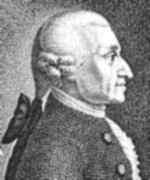 Wenceslaus Johann Gustav Karsten's father, Johann Christopher Karsten, was a pharmacist while his mother, Magdalena Sophia Thiel, was the daughter of a pharmacist from Güstrow. Johann Gustav was the eldest of his parents eight children. In 1735, when the young boy was four years old, his parents' house in Neubrandenburg was destroyed by fire. Having lost their home and all their possessions, the Karsten's moved to accommodation in Burg Stargard, just south of Neubrandenburg. A short while later it was decided to send the young boy to Güstrow to live with his grandfather Gustav Thiel. Johann Christopher then tried to rebuild the pharmacy in Neubrandenburg but in 1741 he too went to live in Güstrow where he became a notary and ran a small farm.

Although Karsten received his education in Güstrow, certainly at first at the Fürstliche cathedral school, it was a schooling which aimed to teach languages and very little attention was given to mathematics or natural science. Later however, beginning in 1748, when he showed great mathematical potential, Karsten was given private instruction in mathematics. Karsten then studied theology and philosophy at Rostock from 1750 to 1752 where he was taught by Aepinus and his brother, and at Jena from 1752 to 1754. It was mathematics, however, which was his real passion, and he studied this on his own.

At Rostock the professor of mathematics, Petrus Becker, died in 1753 and Aepinus was appointed to Berlin in 1754, planning to take up his appointment in the following year. Karsten went to Rostock to study for his doctorate which was awarded in February 1755 for his thesis Algebra ejosque differentia ab Arithmetica Respondente Ⓣ, and he was appointed there as a privatdozent at Easter. Aepinus had not yet left Rostock when Karsten took up his post and was able to advise him about teaching. He also introduced Karsten to Euler and the two exchanged a series of letters (38 in all, of which 23 were written by Karsten) between 1758 and 1765. Karsten began publishing work at Rostock: De affectionibus, quae omnis generis functionum, praecipue si tres vel adeo quatour involvant variabiles, differentialibus competunt, si eorum integrale sit possibile Ⓣ (1756), Elementa matheseos universalis Ⓣ (1756), Beweis, dass der Algorithmus speciosus keine widersinnigen Rechnungsregeln enthalte Ⓣ (1757), and Praelectiones matheseos theoreticae elementarisⓉ (1758).

Realising that his chances of a professorial appointment at Rostock were small, Karsten applied for various positions. In 1756 he applied to the Gymnasium in Hamburg and in the following year to the Königlichen Gymnasium in Stettin. His financial situation at this time was extremely difficult. However his luck changed when the professor of logic at Rostock died leaving a professorial vacancy. Karsten was appointed as professor at the University of Rostock in 1758 but the university suffered problems a couple of years later as a result of a dispute between the city of Rostock and Duke Friedrich of Mecklenburg. The Duke split the university into two parts, one to remain in Rostock, the other to be set up in Bützow, about 25 km south of Rostock, and named the Friedrichs University of Bützow. Karsten was transferred to Bützow where he was rector of the university for a semester in 1765 and again in 1768-69. This was a difficult period in Mecklenburg since the Seven Years' War, which involved all the major powers of Europe, had been fought from 1756 to 1763 and it had left the region very impoverished. This meant that Karsten had to teach in a university in which, certainly at first, there was no library and not even lecture rooms. Karsten had to teach classes of students in his own home. In 1765 Karsten was involved in the publication of Euler's Theoria motus corporum rigidorum Ⓣ. He wrote an important article in 1768 Von den Logarithmen vermeinter Grössen Ⓣ in which he discussed logarithms of negative and imaginary numbers, giving a geometric interpretation of logarithms of complex numbers as hyperbolic sectors, based on the similarity of the equations of the circle and of the equilateral hyperbola. This work is discussed in [1] where Dobrzycki suggests that Karsten's contributions have been underrated. Let us hope that this article will go some way to towards the wish expressed in [1] that Karsten be mentioned in histories of mathematics.

Karsten was appointed to the University of Halle in 1778 to fill the chair which was left vacant on the death of Segner in October of the previous year. Karsten filled this position until his death in 1787.
Other Mathematicians born in Germany
A Poster of Wenceslaus Johann Gustav Karsten