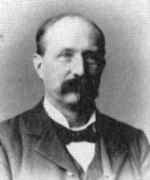 Diederik Korteweg's father was a judge in 'sHertogenbosch in the south of The Netherlands. It was in that town that Diederik attended schools, studying at a special academy which prepared students for a military career. However, he decided against a military career and, making the first of his changes of direction, he began his studies at the Polytechnical School at Delft. This School was founded as the Royal Academy in 1842 and, after being known as the Polytechnical School of Delft, it later became the Technical University of Delft. Korteweg originally intended to become an engineer but, although he maintained an interest in mechanics and other applications of mathematics throughout his life, his love of mathematics made him change direction for the second time when he was not enjoying the technical courses at Delft. He decided to terminate his course and pull out of his studies so that he could concentrate on mathematics. He then enrolled in mathematics and mechanics courses qualifying him to become a high school teacher.

He did indeed become a secondary school teacher, teaching in schools at Tilberg and Breda before continuing his university studies. One might reasonably ask why Korteweg did not immediately begin university studies after terminating his studies at Delft. The reason is simple, he did not have the necessary qualifications to enter a university even though he had already begun to publish papers while he worked as a school teacher. He worked for the necessary diploma while doing a full time teaching job receiving the qualification in 1876. He then entered the University of Utrecht where he spent a year studying mathematics before moving to the University of Amsterdam to work for his doctorate.

The University of Amsterdam was an ancient educational establishment founded as in 1632. However the university had only just been granted the right to award doctorates before Korteweg entered in 1877. He was taught by Johannes Diederik van der Waals, who he first got to know during his time as a school teacher. Van der Waals had been appointed professor of physics at the University of Amsterdam in 1877 and he acted as Korteweg's supervisor. He received his doctorate on 12 July 1878 for his dissertation On the propagation of waves in elastic tubes. It was achieved in a remarkably short period, of the order of six months, and as a consequence his was the first Ph.D. awarded by the University of Amsterdam. He remained at Amsterdam becoming the professor of mathematics, mechanics and astronomy there in September 1881. His inaugural address was Mathematics as an Auxiliary Discipline and it was very interesting in giving many insights into how he saw the role of mathematics in applications to science and statistics. He held this post until he retired in 1918.

Korteweg's main work was in applied mathematics. As we mentioned above, his doctoral dissertation was on the velocity of wave propagation in elastic tubes. In fact this problem came from a medical question, being motivated by physiological experiments on the way that blood behaves in arteries as a result of waves created by the beating heart. His subsequent work included studies of electricity, statistical mechanics, thermodynamics and further contributions to wave propagation. He also collaborated with van der Waals, publishing joint papers with him on topics in electricity, statistical mechanics, and thermodynamics. Van der Waals was working on the phase separation of binary mixtures, and Korteweg supplied the necessary mathematical input with his work on folds on surfaces in a series of papers between 1891 and 1903, such as Over plooipunten en bijbehorende plooien in de nabijheid der randlijnen van het E'-vlak van Van der Waals Ⓣ (1902).

He established a criterion for the stability of orbits of particles moving under a central force. In the theory of stress Korteweg's name is attached to the 'Korteweg stress'. On this topic he published Sur la forme que prennent les équations du mouvement des fluids si l'on tient compte des forces capillaires causés par les variations de densité Ⓣ in 1901. He also studied a stationary wave in a rectangular canal. He is remembered in particular for the Korteweg - de Vries equation on solitary waves, a courageous topic to attack since many mathematicians, including Stokes, were convinced such waves could not exist. In 1894 Gustav de Vries wrote a dissertation Bijdrage tot de kennis der lange golven Ⓣ supervised by Korteweg. The results of this thesis were written up for publication in a joint paper On the Change of Form of Long Waves advancing in a Rectangular Canal and on a New Type of Long Stationary Waves published in the Philosophical Magazine in 1895. They found explicit, closed-form, travelling-wave solutions to the Korteweg - de Vries equation that decay rapidly. In fact this work is extremely important, but sadly this was not recognised at the time and it was over 70 years before this fundamental research led to the rapidly expanding research topic of 'solitons'.

Korteweg's books studying Huygens contributed greatly to the history of mathematics. He was also the editor of Huygens complete works, a project he worked on from 1911 to 1927. It is a remarkable contribution to scholarship for he showed clearly that through his monumental efforts he had come to understand the way in which Huygens thought about mathematics. Coming out of this work is Korteweg's paper Huygens' sympathetic clocks and related phenomena published in the Proceedings of the Royal Academy of Amsterdam in 1905.

Gustav de Vries was certainly not the only one of Korteweg's doctoral students, nor is he the best known. That must surely be Luitzen Brouwer who graduated with his doctorate in 1907. It is worth realising the breadth of Korteweg as a mathematician when one understands that most of his work is on applied mathematical topics, yet he supervised Brouwer's thesis on the foundations of mathematics. We can mention, again showing Korteweg's versatility, his pure mathematics work on algebraic equations in papers such as Sur un théorème remarquable, qui se rapporte à la théorie des équations algébriques à paramètres réels, dont toutes les racines restent constamment réelles Ⓣ (1900). He also studied properties of surfaces in the neighbourhood of singular points.

Korteweg showed a similar versatility in his teaching, with his usual courses being analytic and projective geometry, mechanics, astronomy and probability theory. He put a very large effort into his lectures and expected his students to do likewise.

Let us try to remove any possible confusion by explaining that Gustav de Vries was not the only 'de Vries' that Korteweg supervised, for his later student Hendrick de Vries was awarded his doctorate in 1901. Another student to single out from a list of around 20 students, is H J Beth who graduated with his doctorate in 1910. Beth is the father of the logician Evert W Beth (1908-64).

Korteweg was a member of the Koninklijke Nederlandse Akademie van Wetenschappen (Royal Netherlands Academy of Sciences) for sixty years, being elected in 1881, and of the Wiskundig Genootschap (the Dutch Mathematical Society) for 75 years, being on the organising committee for 58 years. He served as an editor of the Nieuw Archief voor Wiskunde from 1897 to 1941.
Other Mathematicians born in Netherlands
A Poster of Diederik Korteweg

Other websites about Diederik Korteweg: