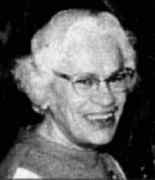 Cecilia Krieger's parents were Moses and Sarah Krieger who were merchants. Cecilia was born into a large Jewish family with her parents Moses and Sarah having three daughters and two sons. Cecilia's sisters were Regina and Rae while her brothers were Samuel and Nathan. Cecilia attended school in Poland but then went to Vienna in 1919 where she entered the University of Vienna to study mathematical physics.

The persecution of Jews made life extremely difficult for the Krieger family, and Cecilia's brother Samuel sponsored his mother and sisters to escape to Canada. This they did in 1920 and arrived in Toronto where Cecilia entered the University. This was certainly no easy task since at the time that she arrived she did not know hardly a single word of English. An added complication was the fact that she had to support herself financially and this she did by working in the Muskoka Inn while she studied at University. Despite all these difficulties she received her BA degree in 1924 and her MA degree in 1925. To qualify for the Master's Degree she took graduate level courses on: Modular Elliptic Functions given by Jacques Chapelon; Minimum Principles of Mechanics given by John Lighton Synge; The Theory of Sets given by Samuel Beatty; The Theory of Numbers given by John Charles Fields; and The Theory of Functions given by W J Webber.

She remaining at the University of Toronto to undertake research under the supervision of W J Webber. Her doctoral dissertation was On the summability of trigonometric series with localized properties - on Fourier constants and convergence factors of double Fourier series. It was published in two parts, the first in 1928 and the second in 1930, both in the Transactions of the Royal Society of Canada. When she was awarded her doctorate in 1930 from the University of Toronto, Krieger became the third woman to be awarded a doctorate in Canada and the first to be awarded a doctorate in mathematics.

Krieger spent a year at Göttingen University. Appointed an Instructor at the University of Toronto in 1928, she was promoted to Lecturer on the award of her doctorate in 1930. By this time she was working to support her unmarried sisters as well as herself, since her father had died in a car accident in 1929. During World War II Krieger repaid the debt she felt she owed for her own salvation from persecution of Jews when she looked after a family of Jewish refugees who had fled to Canada from the Nazi horror.

In 1942 she was promoted to assistant professor and she continued teaching at the University in the Departments both of Mathematics and Engineering until she retired in 1962. She married Zygmund Dunaij, a Jewish survivor of the Nazi holocaust, in 1953. After officially retiring, Krieger continued teaching at the University of Toronto until her husband died in 1968. After this she taught at Upper Canada College until her own death at the age of 80.

In 1997 Cathleen Morawetz was awarded the Krieger-Nelson Prize Lectureship for Distinguished Research by Women in Mathematics by the Canadian Mathematical Society. In accepting the award she recalled her own memories of Krieger:-

I come to my first memory of her from, I think, Christmas 1930. My father was her colleague in mathematics at the University of Toronto. We had just returned to Canada from Ireland and Miss Krieger, as she was known to us children, took my sister and me to the pantomime. I hope I did not say so at the time, but I thought its lack of plot was very stupid (the pantomime in Ireland suffered the same defect). But there was no question that Miss Krieger was the kindest person I had ever met, and I probably did not say that either. ...

For many students of mathematics, she was the source of friendship and encouragement in every way. Her Sunday teas for students were famous for their sociability, intellectual conversation, terrific cakes and every now and then "matches"; for example, she introduced my sister to the man who became her husband. I remember learning that she was also the sole support for many years of her mother and a handicapped sister. It must be added that she lived at a time when the prejudice against women meant that she was for over twenty years not promoted from her position as lecturer.

Krieger is best known for her English translation of Sierpiński's Introduction to General Topology (1934) and General Topology (1952). In this latter book she presented a 30 page appendix on the theory of infinite cardinals and ordinals. We should also mention her work for the Canadian Association of University Women. She strongly supported women having the chance to succeed in mathematics, but when asked what chance a woman had to become successful she replied:-

It depends upon the individual.

The Krieger-Nelson Prize Lectureship mentioned above was set up by the Canadian Mathematical Society in 1995.
Other Mathematicians born in Poland
A Poster of Cecilia Krieger

Other websites about Cecilia Krieger: