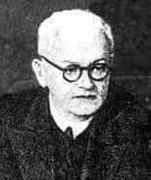 Nikolai Mitrofanovich Krylov graduated from the St Petersburg Institute of Mines in 1902. He was professor there from 1912 until 1917 when he went to the Crimea to become professor at the Crimea University. He held this post until 1922 when he moved to Kiev on being appointed chairman of the mathematical physics department of the Ukrainian Academy of Sciences (in fact renamed the All-Ukrainian Academy of Sciences in the year before Krylov was appointed).

He worked mainly on interpolation and numerical solutions to differential equations, where he obtained very effective formulas for the errors. He also applied his methods to non-linear oscillatory problems in 1932 and, in so doing, laid the foundations for non-linear mechanics.

The treatment is so oriented as to be readily available to the engineer or physicist. In fact, rigor is entirely subordinated to the objective of making the material as widely available as possible. Examples of physical systems are given which lead to the type of equation considered in the monograph. Moreover, general statements of methods for solving equations are illustrated by the explicit solution of examples.

All of Krylov's works emphasise computational aspects, motivations, and applications. In [8] Lucka discusses work by on the Ritz method of convergence:-

We present the fundamental results of the works of N M Krylov and N N Bogolyubov devoted to the establishment of effective error estimates for the Ritz method, the Bubnov-Galerkin method and the least squares method in connection with self-adjoint differential equations.

In 1928 Krylov was elected to the USSR Academy of Sciences and in 1939 he became an honoured scientist of the Ukrainian Soviet Socialist Republic.
Other Mathematicians born in Russia
A Poster of Nikolai Mitrofanovich Krylov

Other websites about Nikolai Mitrofanovich Krylov: