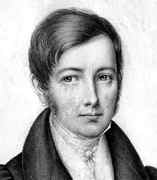 Louis Lefébure de Fourcy spent his childhood in Nantes but was sent to Paris to complete his education at the Collège de la Marine et des Colonies. From there he won a scholarship to study at the École Polytechnique which he entered in 1803 at the age of sixteen. Among those who entered in the same year, we mention François Arago, Charles-Julien Brianchon and Claude-Louis Mathieu. These were the early years of the École Polytechnique during which it operated out of buildings attached to the Palais Bourbon, where the French parliament met. The three years that Lefébure de Fourcy spent at the École Polytechnique were, of course, years during which France was in the grip of the French Revolution. One consequence of this was that Lefébure, as we shall name him for the remainder of this biography, dropped the aristocratic "de Fourcy" in his name. Rather more surprising, however, is that he registered under his father's name so during his studies he was known as Étienne-Louis Lefebvre. France had adopted the revolutionary calendar so Lefébure and his fellow students studied for eight and a half days in each 10 day week at the École Polytechnique. Ivor Grattan-Guinness writes [3]:-

The dominant role of mathematics soon led the students to deploy the catchword 'X' as a name for the school.

Note that Roland Brasseur refers to the École Polytechnique as X throughout the article [2]. Lefébure graduated from the École Polytechnique in 1805 and enrolled in the École d'artillerie in Metz. However, he left almost immediately and was appointed to the Pont-Levoy College in Loir-et-Cher. His circumstances had changed in January 1806 which may have been the reason for the change in his plans. After the death of his father in 1794, his mother had remarried and had two sons before separating from her new husband. She died in January 1806 and this left Lefébure responsible for bringing up his two half-brothers. By May 1807 he was back in Paris at the École Polytechnique where he was appointed as an assistant répétiteur in analysis. Things had changed since he was a student. Napoleon Bonapart was now emperor of France and he had given the École Polytechnique a more military look. It had also moved from the buildings it had occupied when Lefébure was a student, to occupy two colleges not far from the Panthéon. He was awarded a doctorate in 1811 after submitting two theses. One, on mechanics, Équations générales du mouvement des fluides et application de ces équations à la théorie du son Ⓣ consisted of five pages, while the second, on astronomy, De l'attraction des sphéroïdes et de la figure des planètes Ⓣ, contained eleven pages. He dedicated these works to Sylvestre Lacroix who must have acted as an advisor.

He became a répétiteur in analysis in 1813 and in applied analysis in the following year. Around this time there were major changes in France with the defeat of Napoleon in 1814 and the restoration of the monarchy. As a result of these changes, Lefébure stopped using his father's name and went back to signing himself Louis Lefébure de Fourcy. He became a répétiteur in descriptive geometry in 1815 and, from 1817 to 1820, he was an examiner in descriptive geometry and the 'graphic arts'. In addition to his duties at the École Polytechnique, Lefébure was appointed to teach mathematics at the College Louis-le-Grand in December 1814. He had married Marie Françoise Victoire Peyron and they had two sons, Michel-Eugene Lefébure de Fourcy born in November 1812 and Charles Lefébure de Fourcy born in 1815. Michel-Eugene became an engineer and married three times. His first wife was Anne Lassale (1809-1844), his second wife Victoire-Anaïs Mousset (1824-1847), and his third wife being Marie Stéphanie Lamé (1824-1909), Gabriel Lamé's daughter. Charles Lefébure de Fourcy became Inspector General of Roads and Bridges and participated in the building of the Suez Canal. He married Nathalie Hennequin (1822-1903).

At Louis-le-Grand, Louis Lefébure de Fourcy was promoted to teach the special class in October 1817. Of the 21 students in the special class of 1817-18, one was the poet, novelist, and dramatist, Victor Hugo. Many years later, he spoke about his mathematics teacher:-

Professor M Lefebure de Fourcy, lanky with shoulders which incongruously supported a long pockmarked face, had energy and wit. He crossed the class in a stride, giving rapid demonstrations, streaking the table with lines.

The special mathematics class was held every afternoon, Monday to Saturday. As to its content, Victor Hugo explained that the course did not have:-

... a detailed plan, but a list of books by which it is taught, and the authors for the mathematics texts are Euler, Lagrange and Lacroix in algebra, Lacroix or Biot for applications of algebra to geometry, Monge and Poinsot for statics, and Delambre or Biot for astronomy.

The Royal College of Saint-Louis was founded in 1820 and Lefébure was appointed as professor of mathematics. There he taught the special class and among his pupils we mention in particular Joseph Liouville. Lefébure taught at the College of Saint-Louis for five years, leaving in December 1825 when he was appointed as an assistant to Sylvestre Lacroix at the faculty of Science in Paris. This led to his appointment as admissions examiner for the École Polytechnique in 1826. Ivor Grattan-Guinness explains [3]:-

Students were chosen by admissions examiners. The country was divided into four regions, and also Paris, and an examiner travelled in a region for some weeks during the summer to interview promising young boys nominated by local families or dignitaries. The examiners and some school officers then met and chose the enrolment for the following autumn.

This book contained a version of the lectures that Lefébure had given at the Royal College of Saint-Louis while he occupied the chair of Special Mathematics. The popularity of this book is indicated by the fact that by 1881 a tenth edition had been produced. Traité de géométrie descriptive Ⓣ was essentially translated into English by Thomas Grainger Hall, of King's College, London, when he wrote his book The elements of descriptive geometry (1841). In the Preface, Hall explains the position of descriptive geometry:-

Invented by the genius of Monge, and pursued with ardour and success by the most eminent French geometricians, it is now taught in almost all universities and in the principal schools of the continent. In England it was unknown, as a branch of instruction, until lectures were given upon it by Mr Bradley, in the Engineering Department of King's College; and the present work has been undertaken to supply the students with a text book, that by it they might the more profitably attend to what they heard in the lecture room: and as an elementary book was necessary for beginners, it has been thought expedient to place before the students, in an English dress, one which has stood the test of experience. The treatise on Descriptive geometry, by Mr Lefébure de Fourcy has, therefore, been selected, and the following pages are, for the most part, translated from it.

If I had limited the contents to that which is required for admission to the École Polytechnique, it would have formed a much less extensive volume.

Lefébure's books are praised by his son in [1] as having:-

... good ordering of materials, elegant methods, and clarity of style.

However, other have criticised them for being "totally devoid of original ideas." It would be tempting to believe that their popularity might have come from the fact that many students trying to gain entry to top education institutions had to be examined by Lefébure. However, the popularity of these texts continued long after Lefébure ceased being an examiner.

As an examiner, Lefébure had a reputation which made the candidates extremely fearful. Together with Louis Benjamin Francoeur and Jean Nicolas Pierre Hachette, Lefébure examined Évariste Galois for his baccalaureate on 14 December 1828. By two votes to one, the decision of the examiners was that Galois should not enter the École Polytechnique. Most students dreaded being examined by Lefébure and a report by an Inspector from the Paris Academy of Sciences lets us see the reason:-

Several times I attended oral examinations by Mr Lefébure de Fourcy and this is my impression. The professor cannot be considered a benevolent reviewer, his voice is harsh, his tone is dismissive, also he questioned in a very firm stiff manner, and showed no mercy for any errors of logic.

It was not only with students that Lefébure was severe and demanding, but he behaved in the same way towards his own sons. He prepared his son Michel-Eugene for the entrance examinations of the École Polytechnique. Michel-Eugene wrote [1]:-

Twice a week, my father brought us together, one of my friends and I, in front of his old blackboard. I dreaded like fire these sessions, sometimes stormy bringing me to tears. If fear is the beginning of wisdom, perhaps that was how I entered the École Polytechnique at the first examination [in 1829].

In May 1843 Lacroix died and, in July of the same year, Lefébure succeeded him in the chair of differential and integral calculus at the Faculty of Science in Paris. He gave up his role of admissions examiner at the École Polytechnique at this time. However, he did not distinguish himself as a higher education lecturer. A report by an Inspector from the Paris Academy of Sciences, written in 1860, states that:-

... his teaching is of a low standard, and has no originality. The Professor simply repeats what he has learned previously. [Lefébure, who] acquired a good reputation in secondary education, is far from successful, however, in higher education.

It was around this time that his health began to fail and Lefébure retired from the Faculty of Science in September 1863. His wife died in December of the following year after a painful illness throughout which, his son wrote, Lefébure suffered in silence. He died on 12 March 1869 and his funeral was held three days later at the Church of Saint-Sulphice. At the Montparnasse Cemetery an address was given by Joseph Serret.
Other Mathematicians born in Haiti
A Poster of Louis Lefébure de Fourcy