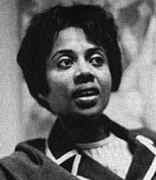 Vivienne Malone-Mayes's name before she married was Vivienne Malone. Her African-American parents were Pizarro Ray Malone, who taught in schools around Waco for many years and also worked for the Urban Renewal Agency, and Vera Estelle Allen, who was also a teacher.

Vivienne's parents were both very keen that she should have the best possible education and she started school at the age of five years, one year earlier than she should have done. She performed exceptionally well at the racially segregated A J Moore High School in Waco and graduated from the school in 1948. She then left her home town of Waco to study at Fisk University in Nashville, which she entered in 1948 with the intention of obtaining a medical degree rather than one in mathematics.

At Fisk, Malone met a fellow student James Jeffries Mayes who was studying dentistry. They soon decided to marry, but Mayes persuaded his future wife to change from medicine since he felt that two doctors in one family would not make for a good family life! Malone decided to switch from medicine to mathematics. A big influence on Malone was that she took courses at Fish given by Evelyn Boyd Granville, one of the first African-American women to receive the Ph.D. in mathematics. Malone-Mayes later wrote:-

I believe that it was her presence and influence which account for my pursuit of advanced degrees in mathematics.

Granville was not the only one at Fisk to have a large influence on Malone. She wrote a tribute to Lee Lorch, chairman of the Department of Mathematics at Fisk University from 1950-55, in 1976. In Lee Lorch at Fisk: a tribute which appeared in the American Mathematical Monthly she described the profound influence he had on her and her fellow students through his interest and his approach to teaching. She describes how Lorch influenced her decision to make mathematics her career.

Malone graduated from Fisk with a B.A. in 1952 and, soon afterwards, on 1 September of that year she married James Jeffries Mayes. She continued to study for her Master's degree at Fisk and in 1954 she was awarded an M.A. Although inspired by Granville to aim at a Ph.D. Malone-Mayes did not set out on that route immediately after the award of her master's degree, rather she returned to Waco where she was Chair of the Mathematics Department at Paul Quinn College, operated by the African Methodist Episcopal Church. Her husband opened a dental practice in Waco and Malone-Mayes spent seven years in this post. She then spent one year at Bishop College in Dallas where she was Chair of the Mathematics Department.

In 1961 Malone-Mayes decided that she wanted to study more mathematics. She applied to study at Baylor University in Waco but they rejected her because she was an African-American. She later wrote that, although at the time she felt bitter, in retrospect they did her a good turn for Baylor University did not offer Ph.D. courses:-

It was a blessing, really. If they'd accepted me at Baylor, I would have just taken a few courses and not pursued a doctorate.

The University of Texas was required by Federal law to take African-American students so Malone-Mayes began to take summer courses there:-

The first summer gave me the courage to continue full time, especially after I succeeded...

It was not easy for she was the only Black student:-

When I made a low grade, I felt I'd let down 11 million people. That's a heavy burden. Every professor stereotyped Blacks by my performance. You felt like you had no choice but to excel.

After doing well in the summer courses she decided to study for her doctorate. Her supervisor was Don Edmonson but it took real determination to succeed in the prevailing atmosphere [3]:-

In graduate school she was very much alone. In her first class, she was the only Black, the only woman. Her classmates ignored her completely, even terminating conversations if she came within earshot. She was denied a teaching assistantship, although she was an experienced and excellent teacher.

... it took a faith in scholarship almost beyond measure to endure the stress of earning a Ph.D. degree as a Black, female graduate student.

I could not join my advisor and other classmates to discuss mathematics over coffee at Hilsberg's cafe .... Hilsberg's would not serve Blacks.

Some classes were closed to her despite the fact that the University of Texas was required to take Black students. For example R L Moore refused to have any Black students in his classes.

In 1966 when she was awarded a doctorate for her thesis A Structure Problem in Asymptotic Analysis by the University of Texas at Austin she became the fifth African-American woman to receive a Ph.D. in mathematics. Some results from her thesis were published in Some steady state properties of (∫ f(t)dt)/f(x) which she published in the Proceedings of the American Mathematical Society in 1969. She defines a steady state function as follows. Let F(x) and G(x) be two functions defined for 0≤x<∞. Then the function G(x) is defined to be a steady state for F if for every ε > 0 there is a T>0 such that ∣F(x)−G(x)∣<ϵ whenever x>T. Malone-Mayes studies those steady states that are periodic and continuous, in which case she proves that they are unique. She looks for necessary and sufficient conditions that certain functions will have a periodic steady state.

It was somewhat ironical that after being awarded her doctorate in 1966 she was offered a professorship at Baylor University in Waco which had rejected her application to study there five years earlier. She became the first Black faculty member at Baylor University. Over the first few years there she felt well treated and when writing the article [6] in 1975 she wrote:-

I have never had any complaints about salary or promotions. I have received financial support from the administration for innovative and experimental projects ... An additional safeguard of my welfare has been yearly visits by representatives of the [federal] government. They have checked salaries and promotions to determine if I was being subjected to any discrimination. These reports have always been encouraging to me.

Surprisingly, and very sadly, the position deteriorated. The yearly visits by representatives of the federal government ended as the political climate under President Regan and President Bush changed with civil rights agencies having severe cuts in their budgets. Malone-Mayes felt that her position at Baylor was weakened by this and she made a number of complaints about her treatment.

Her research interests moved towards summability theory. In 1980 she published a joint paper Some properties of the Leininger generalized Hausdorff matrix with B E Rhoades which appeared in the Houston Journal of Mathematics. Here is the author's summary in the paper:-

Endl, Harrell, Jakimovski, and Leininger have each defined generalizations of ordinary Hausdorff matrices. It is shown that the definitions of Harrell and Leininger are formally the same, whereas those of Jakimovski and Leininger agree only for the Endl means. Thus Harrell's definition gives a class of generalized Hausdorff means not previously considered. A number of properties of the Leininger method are investigated, including sufficient conditions for regularity and for satisfying the Barone property.

After a few years of ill health caused by a chronic inflammatory disease which forced her to retire in 1994, Malone-Mayes suffered a heart attack E Falconer and L Lorch give this tribute to Malone-Mayes in [3]:-

With skill, integrity, steadfastness and love she fought racism and sexism her entire life, never yielding to pressures or problems which beset her path. she leaves a lasting influence.

Finally we should record some more of Malone-Mayes's achievements. She was the first Black elected to the Executive Committee of the Association for Women in Mathematics and served on the Board of Directors of the National Association of Mathematicians. She was a member of the Mathematical Association of America, serving as their Director-at-Large for the Texas section and their Director of the High School Lecture Program. She was also a member of the American Mathematical Society and participated in the Centennial Celebrations in 1988.
Other Mathematicians born in USA

Other websites about Vivienne Malone-Mayes: