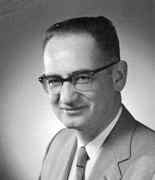 Leo Moser's parents were Laura Feurstein and Robert Moser. Although he was born in Austria, his parents emigrated to Canada when he was a child. Sadly, however, he suffered from a serious heart condition which meant that his life was plagued by poor health. Leo attended primary school in Winnipeg, where his parents had set up home, and continued his secondary education there. His younger brother Willy Moser also went on the become a mathematician and has his biography in this archive. Remaining in Winnipeg, Leo then entered the University of Manitoba to study mathematics. He graduated with a B.Sc. in 1944 and then moved to the University of Toronto where he studied for his Master's degree. He was awarded his M.A. in 1945. Moser married Eva on 10 September 1946; they had four children, Barbara, Melanie, David, and Sheryl.

For his doctoral studies, Moser went to the University of North Carolina at Chapel Hill. There he undertook research, advised by Alfred Brauer. R H Hudson and T L Markham, in Alfred T Brauer as a mathematician and teacher, indicate the quality of Moser's Ph.D. supervisor:-

... beginning in 1942, Alfred Brauer taught with a dedication that honours the teaching profession at the University of North Carolina, Chapel Hill. His extra-help sessions and incredibly long hours working with students in his office helped make him a truly beloved teacher.

Alfred Brauer's interests were in number theory and so this was the area in which Moser began his research. Even before he had submitted his dissertation, Moser had several papers published. These include On the sum of digits of powers (1947), Some equations involving Euler's totient (1949), Linked rods and continued fractions (1949), On the danger of induction (1949) and A theorem on the distribution of primes (1949). This last mentioned paper appeared in the American Mathematical Monthly and in its two pages Moser gives a short elementary proof that for any positive integer r there is a prime p satisfying
3×22r−1<p<3×22r.
He also indicates how the proof can be modified to give a proof of Bertrand's theorem. Further papers such as A prime representing function (1950), Palindromic primes (1950), and On the distribution of digits in powers (1950) were all published before he submitted his thesis On Sets of Integers which Contain No Three in Arithmetical Progression and on Sets of Distances Determined by Finite Point Sets.

Moser was appointed at Texas Technical College, but shortly after this he was offered a position in the University of Alberta, and he moved back to Canada to take up the job in 1951. Sharma, in [3], describes visiting Moser in Edmonton. He was:-

... a simple, courteous and soft spoken person full of anecdotes, humour and problems. Although the department was small and had no separate building to itself, Leo Moser was the centre of activity discussing problems with any one who cared to listen. He had a photographic memory and was an excellent chess player. I learned that he could play chess against teams of 20 or 30 students from different schools at the same time and would win against all of them. In the faculty lounge in the department, he would discuss problems or tell anecdotes to his students. Anyone who came in and wanted to listen was welcome. ... he had started a book of problems in which visitors and anyone who has a problem could put his problem in black and while. ... Professor Moser was very hospitable and the evening parties at his home were always a treat.

Moser loved the problem based type of mathematical questions. It was number theory problems which first attracted his attention but later he also fell in love with combinatorial problems and problems in graph theory. He published over 100 papers, many of them in journals devoted to mathematics teaching. Here are a small selection of his papers (some co-authored with Joachim Lambek, some with Max Wyman, some single author papers): On the different distances determined by n points (1952), Note on a combinatorial formula of Mendelsohn (1953), On the distribution of Pythagorean triangles (1955), An asymptotic formula for the Bell numbers (1955), and Rational analogues of the logarithm function (1956). Later papers include An extremal problem in matrix theory (1966), Some packing and covering theorems (1967) (both with J W Moon), On packing of squares and cubes (1968) (with A Meir) and An extremal problem in graph theory (1970) (with Paul Erdős).

Leo Moser had mathematical talents that were unique among the many mathematicians I have known personally or through their published work. Foremost among these talents were intuition, simplicity, ingenuity, and clarity. Above all he demonstrated an amazing ability to analyse the most complex of mathematical problems, and by intuitive heuristic arguments outline ways in which they might be attacked ... He was a warm person with a well developed sense of humour. He had an infinite stock of amusing stories, and a huge storehouse of simple puzzles of both a mathematical and a non-mathematical nature. To spend time with him was doubly pleasant in that one always had the sense of learning and, at the same time, of being quietly entertained.

We mention above the heart problems which afflicted Moser all his life. However, few around him were aware of his poor health. In 1967 doctors gave him two months to live unless he underwent a major heart operation. The operation was partially successful in that it gave him three more years of life, but his death at 48 years of age robbed his family and the world of mathematics of someone who had so much more to give.
Other Mathematicians born in Austria
A Poster of Leo Moser

Other websites about Leo Moser: