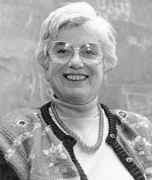 Vera Pless's name before she married was Vera Stepen. Her parents were Jewish Russians who had emigrated to the United States and were keen to make sure that their daughter had all the educational benefits that the United States had to offer. She was brought up in a Jewish area on the west side of Chicago and her parents pushed her to gain educational qualifications as rapidly as possible.

When Vera was about 12 years old she was taught calculus by a family friend who was a graduate student at the University of Chicago. He saw that she had a real mathematical talent but Vera was not at this stage interested in mathematics. She played the cello in her High School orchestra and had an ambition to be a top cello player. Certainly she wanted to make first cello in the orchestra but when her father pushed her into leaving high school two years early she had to reluctantly miss out on that pleasure.

Entering the University of Chicago, she was awarded a Bachelor's Degree after only three years of study. She still had no burning desire to become a mathematician, although a number of people provided inspiration [1]:-

I had no ambition to become a mathematician; girls at that time aspired to be wives (of successful men) and mothers. Maybe some "unfortunate" girls never married and pursued careers but, as far as women mathematicians went, I never saw one the whole time I was a student. However, I did know about the work of Emmy Noether and it may have influenced my choice of area, algebra, although I think the teaching of Irving Kaplansky was what really inspired me.

Both Emmy Noether and Irving Kaplansky were algebraists, particularly studying ring theory, so it is not surprising that their inspiration led her to algebra. Vera continued her studies at the University of Chicago working for her Master's degree. She met her future husband, a physics student, at the university and they were married in 1952 two weeks before her master's examination.

After the award of her Master's degree, Pless took a job with a physics group at the University of Chicago while her husband continued to work for his doctorate. However, not long after starting the job she was awarded a Fellowship to study for a Ph.D. at Northwestern University [1]:-

I worked for my Ph.D. (under the direction of Alex Rosenberg) because it was a more interesting occupation than the job I had while waiting for my husband to complete his Ph.D. in high-energy experimental physics.

When her husband finished his doctorate he was offered a post at the Massachusetts Institute of Technology and Pless moved with him to Cambridge, Massachusetts [1]:-

I had not finished my thesis but did have a good start. Alex [Rosenberg] was amenable to my finishing by correspondence. This occurred with many helpful, humorous letters from Alex. I only went back to defend my thesis, which was about two weeks before my first child, a daughter, was born (she was early).

Pless was awarded her doctorate in 1957. A publication arising from her doctoral work was The continuous transformation ring of biorthogonal bases spaces which was published in the Duke Mathematical Journal in the following year. In this paper Pless looks at dual vector spaces of countable dimension over a division ring and studies the ring L of all continuous linear transformations on such a space. The main results describe the structure of B/A where B and A are non-zero ideals in L proving, in particular, that B/A is a primitive ring that is not regular.

Times have changed, but one has to realise that Pless followed the expectations of her day when she did not think to look for a job after receiving her doctorate, rather she stayed at home to look after her daughter. In 1959 her second child, a son named Ben, was born and when Ben was old enough to attend nursery school in 1962, Pless began to teach courses at Boston University [1]:-

I still felt my first responsibility was to my small children. Even with my teaching, I found this life stultifying. We had little money, so we could not hire babysitters or household help. My husband was very ambitious, worked long hours and did not feel he should help anyway, which was common then.

Once her youngest boy Ben was old enough to begin primary school, Pless began to look for full-time posts. Her attempts to get a university post were unsuccessful. On the one hand she had teaching experience but on the other hand she had not kept up her research. However, she felt knew that she was being discriminated against for being a woman and often she was told openly that universities and colleges were not the place for a woman. However she heard that the Air Force Cambridge Research Laboratory was looking for mathematicians to work in a new area called "error-correcting codes" and although she had never heard of an error-correcting codes at this time, her algebraic experience was rightly considered to be exactly what was needed to make progress.

Pless worked at Air Force Cambridge Research Laboratory from 1963 to 1972 with a short break for maternity leave when her third child was born. During this time she became one of the leading world experts on coding theory. In 1963 she published Power moment identities on weight distributions in error correcting codes which gives:-

... an expression for the first s moments of the Hamming weight distribution of an arbitrary linear code in terms of the number of codewords of each weight less than s in the orthogonal complement, or dual code. The result, based on the MacWilliams' identities, is used to determine the complete weight distributions of several quadratic residue codes.

She also published some articles which continued the research she had undertaken for her doctorate. For example she published On Witt's theorem for nonalternating symmetric bilinear forms over a field of characteristic 2 in 1964 and On the invariants of a vector subspace of a vector space over a field of characteristic two in the following year, both publications being in the Proceedings of the American Mathematical Society. Further early papers on coding theory included On the uniqueness of the Golay codes published in the Journal of Combinatorial Theory in 1968 and, in the following year On a new family of symmetry codes and related new five-designs in the Bulletin of the American Mathematical Society.

Carrying out basic research in the Department of Defense establishments was banned by the United States government and in 1972 Pless left and for three years she worked at the Massachusetts Institute of Technology as a research associate before being appointed a full professor at the University of Illinois at Chicago in 1975.

In 1982 she published an important text on coding theory Introduction to the theory of error-correcting codes. It was designed as a one semester course for undergraduates on algebraic coding theory and has:-

... proven its usefulness for professors teaching courses in coding theory. The proofs throughout are the simplest ones known.

An expanded second edition appeared in 1989. This is one of about 100 publications which Pless has up to the present time. When asked what are she considered her work to be in she replied:-

While I consider myself a pure mathematician, some very interesting questions I've worked on have been posed by individuals who have been interested in applications.

... a woman who is as friendly and engaging as she is unaffected by the dramatic impact she has had in the field of coding theory. Her claim that that she has just been having fun is one of the most becoming features of both her personality and her story.

In [1], written over ten years ago, Pless sums up her own career as a woman mathematician and compares it with what faces women today:-

In retrospect, I think I was very lucky. I worked in coding from its beginning and it has developed into a fascinating mathematical topic. I have appreciated the opportunity to work with many wonderful mathematicians, in particular Richard Brualdi, John Conway, and Neil Sloane. I was able to care for my children in their younger years in a low pressure environment. I would find child rearing difficult facing the pressures our assistant professors face. Our discipline is not the only one demanding a great deal. My daughter, a medical resident with a young daughter of her own, has plenty to say about the long hours required of residents. Unfortunately, our society is probably losing valuable contributions from women for these reasons, and many women are paying a great emotional toll either in forfeiting careers or in not devoting as much time to their families as they feel they should.

Other websites about Vera Pless: