Born
16 February 1908
Castelfranco Veneto, Italy
Died
29 May 1978
Florence, Italy
Summary
Guglielmo Righini was an Italian astronomer, specializing in the study of the sun. He also wrote on the history of science. 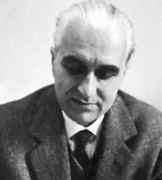 Giorgio Abetti was working on solar physics and so it was natural for Righini to also undertake research on this topic. His first publication was Sul profilo del tripletto del magnesio nello spettro del Sole Ⓣ published in 1930. In 1934 he had to spend some time doing military service, after which he went to Utrecht where he worked with the astrophysicist Marcel Minnaert (1893-1970), who was involved in deep studies of the sun. Righini was supported financially on this trip to Utrecht by a grant from the Rockefeller Foundation. He wrote the first modern Italian work on solar physics and presented it to the Congress of the International Astronomical Union, which was held in Paris in 1935. He travelled from Florence to Paris on a motorcycle to attend this Congress.

In 1936 Righini accompanied Giorgio Abetti on an Arcetri Observatory expedition to Russia to observe a total solar eclipse of the sun. They set up their instruments in Orenburgh in Siberia and observed the eclipse which took place on 19 June. From observations made during that eclipse Righini was able to propose the hypothesis that the particles forming the solar corona were moving at great speed and concluded that the coronal gas should be at temperatures of the order of millions of degrees. This was in fact confirmed later. Rosino writes [10]:-

This was his first experience in the observation of solar eclipses; in later years he took part in seven other expeditions, observing total eclipses of Sun from the ground and from aircraft, becoming one of the most experienced scientists in this field. Righini was extremely skilful not only in experimental and observational work, but also in the theoretical analysis and interpretation of the results. So, although the working conditions were very difficult during the war, he was able to devise and construct instruments for the optical integration of spectral lines, while at the same time examining from the theoretical point of view the structure of their profiles. During these years he published a series of papers on the physical conditions of the solar corona, the intensity distribution of its continuous spectrum, its colour index and temperature, again on the basis of observational and theoretical considerations.

After World War II ended, Righini spent periods of study in Cambridge, England, and in the United States. His visit to Cambridge in 1948 was funded by the British Council and on this trip he was able to learn about the latest developments in solar radio astronomy. The trip to the United States was in 1955-56 when he was at Ann Arbor and at Sacramento Peak. In 1951 he had been appointed as director of the Astrophysical Observatory of Asiago. This observatory, founded in 1942, was located in the northern part of Italy and was equipped with the Galileo 122 cm telescope, at that time the largest in Europe. He worked at the Asiago Observatory until late 1953 when he was appointed as Professor of Astronomy at the University of Florence and Director of the Arcetri Observatory, succeeding Giorgio Abetti. Righini took up these new roles early in 1954.

One of Righini's first tasks was to organise an expedition to the island of Öland in Sweden to observe the total eclipse on 30 June 1954. This expedition, however, was not lucky for the sky was cloudy and observations of the eclipse were not possible. He continued in observing solar eclipses [10]:-

Classical researches were not forgotten, but carried out with new methods. Several expeditions for observing total eclipses of Sun were organized by Righini. In the eclipse of February 15, 1961, when the path of the totality passed over Arcetri, Righini observed the phenomenon aboard a military aircraft, following the shadow of the Moon at high altitude, so to increase, in a perfectly clear sky, the duration of totality. As a recognition of the success of this new technique, he was invited by the National Geographic Society and the Douglas Aircraft Corporation, and later by the NASA, to participate in the capacity of an expert, in the observations from on board jets of the solar eclipses of July 20, 1963 in Canada, on May 30, 1965 in the Southern Pacific, and on November 12, 1966, in Brazil.

It is amusing to note that although one might expect a clear sky from an aircraft, in fact there were problems at the time of the 1961 eclipse over Arcetri when a local farmer decided to light a fire, with much smoke, shortly before the eclipse was due. The police, however, told him to extinguish the blaze which was indeed put out in time for the eclipse to be viewed in a clear smoke-free sky.

In addition to his important research, Righini was also an excellent person to talk about the latest developments in astronomy and was in great demand from the press, radio and television channels to describe these developments at a level which could be understood by the general public. The reader of this biography may be wondering why we have included Righini in our History of Mathematics archive. There are many astronomers in our archive but they tend to be more on the mathematical side than was Righini. The reason for his inclusion is, however, rather different. From the around 1962, he published some important material on the History of Science. In particular, Righini was a leading expert on Galileo Galilei and we give a list of his main works on Galileo and other topics in the History of Science at THIS LINK.

When a scientist of international renown, after many years of distinguished work in his own field of specialization, turns his attention to the accomplishments of his great predecessors in that field, unique benefits to the history of science result. Such events, not uncommon in the early days of our discipline, have now become unfortunately rare. A striking example is the work of Professor Guglielmo Righini since his publication in 1962 of a study of the Florentine astronomical tradition at the Arcetri Observatory

As a historian of science, Righini is best known for his studies of Galileo. Drake writes [3]:-

Professor Righini's writings on history of science began in 1962, when he had already published 118 astronomical papers. They did not interrupt, but supplemented, those activities. It was natural that he should have been particularly attracted to the astronomical work of Galileo. Not only the place of long residence was in common between Galileo and Guglielmo Righini; also their interest in applying and devising technological devices to improve astronomical observations and measurements. I may add as a personal note, when we once discussed Galileo's first pseudonymous attack on the stubborn Aristotelianism of his opponents in the matter of the new star of 1604, I discovered that the dialect of the Paduan countryside - which so charmed the Florentine Galileo that he employed it in that first published work of his - was familiar also to Righini from his childhood in the Veneto. He was a most urbane and charming conversationalist, soft-spoken as became a man of unquestionable authority on the most diverse topics.

In 1964, for the 400th anniversary of the birth of Galileo, Righini wrote the 118-page work Contributo alla interpretazione scientifica dell'opera astronomica di Galileo Ⓣ. This was published in 1978 shortly after Righini's death.

In 1965 Righini, who by then was 57 years old, married Maria Luisa Bonelli (1917-1981). Maria Luisa, the daughter of Luigi Bonelli and Adele Giamperoli, was an historian of science and an expert on museums. When she married Righini she was the director of the Museum of the History of Science in Florence, which today is called the Museo Galileo. She had been employed first to help the museum recover from the damage caused by the bombings that destroyed the bridges of the Lungarno at the end of the Second World War. However, another major tragedy struck the museum on 4 November 1966 when the river Arno flooded [1]:-

The instruments that at the time were stored in the basement and ground floor of the Museo were seriously damaged. Thanks to international solidarity and the efforts of Maria Luisa Righini Bonelli, then-director of the Museum, it was possible to quickly carry out recovery of the instruments, reopen the exposition rooms to the public and return energies towards library collecting and research activities.

Finally, we note that Righini's son, Alberto Righini (1942-), is an associate professor at the University of Florence with interests very similar to those of his father. He too has published a book on Galileo, namely Galileo. Tra scienza, fede e politica Ⓣ (2008).
Other Mathematicians born in Italy
A Poster of Guglielmo Righini

Other pages about Guglielmo Righini:

Other websites about Guglielmo Righini: