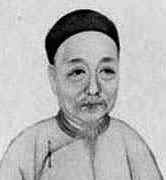 Ruan Yuan is also known as Juan Yuan. He came from a distinguished Yangzhou family, with his grandfather having been Major General of Hunan province. The city of Yangzhou where Ruan was born is about halfway between Nanjing and Shanghai. It is in Jiangsu province which is bordered to the east by the Yellow Sea. Ruan obtained his master's degree in 1786 and, three years later, passed the civil service examinations and was appointed to the Hanlin Imperial Academy, the highest academic institution in China. We should note that this put Ruan in a position of authority since scholars there acted as advisors to the emperor and as his confidential secretaries.

Perhaps we should say a little about what was involved in Ruan Yuan's education. The Academies basically trained students for examinations and the most advanced of these, the civil service examinations, were very much based on the ancient Chinese classics. The underlying philosophy was that of Confucianism as interpreted in commentaries by Cheng Yi and Zhu Xi in the 11th and 12th centuries. To achieve the level which Ruan Yuan achieved required many years of study and he would have been a very elite scholar of Confucianism. He was then in a position to carry out duties at the Hanlin Academy where scholars worked on new interpretations of the Confucian Classics as well as keeping historical records, and preparing encyclopaedias recording as complete an account of knowledge as they could.

Ruan Yuan did not follow the traditional Neo-Confucian beliefs which were based on the commentaries on the classic texts by Cheng Yi and Zhu Xi. Rather he believed in evidential studies which believed that truth was best achieved by studying the classics themselves, and older commentaries on them. This approach, also known as Han Learning, had gained favour and led to huge efforts being put into collecting ancient works. Starting in 1772, when Ruan Yuan was a young boy, the Chinese Emperor Qianlong organised major searches for lost texts. Experts in textual analysis studied the texts while other experts tried to reconstruct lost texts from quotations in surviving works.

From 1790 Ruan worked for the Hanlin Imperial Academy. In 1791 he wrote the Verse of astronomer Zhang Heng. This work was on the calendarist and constructor of armillary sphere who lived from 78 to 139 AD. Ruan's career as a government official led to him holding a variety of offices such as that of a minister in the Education Department of Shandong province from 1793 to 1795 when he took up a similar post in Hangzhou in the Education Department of Zhejiang province. It was while he held this post that Ruan began his most famous work, namely the Chouren zhuan or Biographies of astronomers and mathematicians.

In this work Ruan put forward the idea, which had been gaining credence in China for some time, that all Western sciences were of Chinese origin. The book suggests that it was difficult to separate astronomers and mathematicians, yet this seems not to be strictly accurate for Ruan includes as mathematicians those involved in computing the calendar, engineers, geographers, economists, and more surprisingly, some poets and musicians. It was not a work which he undertook alone, for colleagues such as Li Rui assisted him. The work consists of 46 chapters containing biographies of 275 Chinese and 41 Western "mathematicians". The biographies are certainly not as interesting as one might hope, mostly simply listing administrative and academic titles. More interesting are the numerous quotations from the works of the scientists whose biographies are given. Martzloff notes that a studies of the European mathematicians included in the work [2]:-

... confirm the importance of Jesuit and Protestant missionaries. They also reveal, at various levels, some limitations and obstacles faced by astronomy and mathematics in the process of transmission from Western countries to China. For example, European names of persons were not always rendered consistently ...

Examples of these difficulties are illustrated by the fact that Copernicus is given two different names in Chinese and given two separate biographies without it being recognised that they are of the same person. A similar error occurs with Viète. Again it is not surprising, if the length of the entry in any way indicates importance, that certain biographies look strange. For example Newton merits 11 lines, against 74 lines for Matteo Ricci and 22 lines for Auguste Lendy, a British Captain. However [2]:-

Despite obvious limitations and misrepresentations, Western astronomy and mathematics made accessible to Chinese readers, was none the less, for the most part, based on significant excerpts from texts of primary importance such as Ptolemy's Almagest Ⓣ, Copernicus's De revolutionibus or Euclid's Elements and never on mythical accounts. That was all that Ruan Yuan needed to bring to the fore "the strong and weak points" of both sciences in order to prepare a future synthesis.

While still working on this major compilation of biographies of mathematicians, he edited the Dictionary of Old Literature (1797). The Biographies of astronomers and mathematicians was published two years later in 1799. In this year Ruan Yuan was appointed a professor of mathematics in the Imperial Academy as well as holding a number of posts in government departments. In 1800 he was appointed governor of the province of Zhejiang (or Chekiang), a coastal province bounded by the East China Sea. In addition to his political career, he continued his scholarly pursuits. He wrote the foreword to the Ti Chhiu Thu Shuo (An Illustrated Account of the Earth) by Chhien Ta-hsin in about 1800. In it Ruan advised the readers of the book not to follow the Copernican theory just because of its "newness". He also combined his administrative and academic interests when he founded the Gujing jingshe (School of Classical Literature). The school was set up with an innovative curriculum, and literature, astronomy, geometry and mathematics were taught there.

He continued to edit, catalogue and collect books and his career moved forward when he was appointed Chancellor of Henan province in 1806. An incident occurred in 1809 which somehow involved the examination procedure and since Ruan Yuan was responsible be was demoted. Sent to the Hanlin Imperial Academy as a rather lowly scholar, he continued his research into ancient texts, being promoted to a researcher in the Historical Library, and then in 1810 he became director of the Library. Slowly he made his way back up to high office, becoming Governor of Jiangxi province in 1814. Around this time he edited the Commentaries to the Thirteen Classics and organised its printing.

Ruan, in order to further his research, always sought out ancient texts and information from inscriptions, and interviewed leading citizens wherever he was appointed. An example is the following. Zhu Shijie wrote the Ssu-yuan yu-chien (Precious mirror of the four elements) but the work was lost during the latter part of the 18th century and was not found by Ruan Yuan when he compiled his Biographies of astronomers and mathematicians in 1799. However some years later he found a copy. He made a hand written copy which was sent to Li Rui for editing but Li Rui died before the work could be completed. Ruan's hand written copy was eventually printed.

In 1817 Ruan Yuan reached his highest position of importance when he was appointed Grand Governor of the two Guangzhou, so becoming governor of the two provinces of Guangdong and Guangxi in southern China. It was in the city of Guangzhou that Ruan Yuan founded his most famous academy the Xuehaitang, meaning the Sea of Learning Hall. At first he organised examinations in "ancient learning" in buildings which already housed an existing academy in Guangdong. Then in 1824 he selected a site for new academy buildings on a hill just inside the northern city wall of Guangdong. That the Xuehaitang should be on a hill was significant for he intended that the people should look up to the place of learning. Building was complete in the following year and Ruan himself set the first examination essays. The Xuehaitang Academy, designed to promote evidential studies and Han Learning, went on to achieve the high aims of its founder.

We should mention another of Ruan's scholarly interests, namely that he was an avid collector of bronze ritual vessels and is said to have owned over 460 of these which had been made between 1600 BC and 220 AD. He was not simply collecting these historic vessels for their own sake, for he studied the inscriptions on them and, in 1804, published a book which reproduced many of them. This study made him a leading authority on calligraphy and his book on the inscriptions was a major influence on the study of calligraphy throughout the 19th century.

Finally let us note the importance of Ruan's Biographies of astronomers and mathematicians in Chinese scholarship. It represented the integration of the mathematical sciences with evidential studies and, after its publication, mathematical study was no longer independent of classical studies. The work was republished at least six times up to 1955. Further chapters were added as supplements in 1840, in 1886, and in 1898.
Other Mathematicians born in China
A Poster of Ruan Yuan