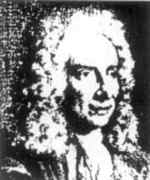 Willem 'sGravesande's family were originally named Storm van 'sGravesande and even later members continued with the old form of the name, for example Laurens Storm van 'sGravesande was governor of Essequibo from 1742 to 1772. Willem's early education was at home with a private tutor named Tourton who was employed to educate Willem and his brothers. Tourton saw that Willem had considerable mathematical talents and he was able to encourage him in that direction even though Willem was expected, as were his brothers, to make a career in the legal profession. He studied law at Leiden University, entering the university in 1704. He wrote a doctoral thesis on 'suicide' and submitted it in 1707.

'sGravesande and his brothers all became lawyers, practising in The Hague. He maintained an interest in mathematics and science, however, and published Essai de perspective Ⓣ at Leiden in 1711 (see [3] for details). He was influential in the setting up of the periodical Journal littéraire de la Haye in 1713. This journal gave him a natural vehicle for his writings and he contributed several book reviews and essays which were published there. His essays show that he was thinking about problems of the day in quite deep philosophical terms. The most famous of these essays, which was published in volume 12 of the journal, was Essai d'une nouvelle théorie du choc des corps fondée sur l'expérience Ⓣ. In this essay 'sGravesande discussed one of the major problems of the day, namely that of vis viva, or living force, which is a 17th century concept of energy. There were two rival theories, one due to Huygens and Leibniz, the other due to Descartes. The first considered the force acting on a body integrated over the distance travelled, the second integrated over the time. In his essay 'sGravesande argued in favour of the Huygens-Leibniz interpretations stating:-

The force of a body is proportional to the mass multiplied by the square of its velocity.

Samuel Clarke attacked the ideas that 'sGravesande presented in this essay, but 'sGravesande was able to reply with a robust defence of his ideas.

Appointed as secretary to the Dutch Embassy, he was sent to England in 1715 to congratulate George I on has accession to the throne. While in London he was elected a Fellow of the Royal Society on 9 June 1715. He got to know Newton, Desaguliers and John Keill at this time and, after returning to The Hague in 1716, he continued to correspond with Keill. In 1717 'sGravesande became professor of mathematics and astronomy at the University of Leiden. In addition, he became professor of philosophy there in 1734 [1]:-

By this time Hermann Boerhaave and sGravesande were established as the twin luminaries of Leiden, attracting hundreds of foreign students each year. From the outset of his teaching in both physics and astronomy 'sGravesande modelled his lectures on the example of Newton in the 'Principia' and 'Opticks', although in later years they incorporated other influences, especially that of Boerhaave. Moreover, he adopted from Keill and Desaguliers the notion of demonstrating to his classes the experimental proof of scientific principles ...

'sGravesande taught and wrote many texts on Newtonian science and Keill's contributions. He wrote textbooks on mathematics and philosophy. For example he wrote a textbook to teach mathematics which he published in 1725. His writings on philosophy proved somewhat more controversial: for example the philosophy textbook he published in 1736 was highly criticised for his treatment of necessity and freewill. The Latin text, however, enhanced his reputation as a teacher and was translated into Dutch and English. He also published and edited works written by others, for example the Opera varia Ⓣ and Opera reliqua Ⓣ by Huygens, several works by Keill and the Arithmetica universalis by Newton. This work of Newton was published by 'sGravesande in 1732 and four years later Voltaire, another strong supporter of Newton on the Continent, travelled to Leiden to have 'sGravesande approve his own work on Newton Elémens de la philosophie de Newton Ⓣ. Voltaire wrote after his visit of both the kindness and the scholarship shown by 'sGravesande.

The most influential of sGravesande's publications was the two volume book Mathematical Elements of Physics published first in Leiden in 1720 and 1721. The book was written in Latin and entitled Physices elementa mathematica, experimentis confirmata, Sive introductio ad philosophiam Newtonianam Ⓣ but an English translation was quickly made by Desaguliers and the two volumes were each published in the same year as their Latin original. The book went through many editions and 'sGravesande put much effort into the continual updating of the work. The book was popular in Britain and Germany but, although a French translation was prepared and published in 1746, as might be expected, the work did not gain the same popularity in France. Newtonian physics was criticised by most Frenchmen as they rallied behind Descartes. 'sGravesande begins his text by claiming:-

I have thought fit to make good the Newtonian method, which I have followed in this work.

In physics we are to discover the laws of nature by phenomena, then by induction prove them to be general laws; all the rest is to be handled mathematically.

Here, of course, he is arguing that experiments will provide the basis for understanding physical laws rather than producing laws though pure thought. Volume I of the text includes:-

... three chapters of fire (containing electricity), two books on optics, one on the system of the world, and a final book entitled "The physical causes of the celestial motions".

The motion of the planets, he claims, is due to universal gravitation, by the cause of gravity remains a mystery to him:-

... and cannot be deduced from laws that are known.

A rather strange episode occurred in 1721 when 'sGravesande visited Kassel to examine a machine invented by Orffyreus which purported to be capable of perpetual motion. He was invited by the landgrave of Kassel to pass judgement of whether the machine was genuine or whether Orffyreus was a fraud. 'sGravesande could find no evidence that deception was involved, and also seems to have believed that such a device would not contravene the laws of physics. Following his examination of the machine he wrote Lettre à Mr Newton sur une machine inventée par Orffyreus: Remarques touchant le mouvement perpétuel Ⓣ.
Other Mathematicians born in Netherlands
A Poster of Willem 'sGravesande

Other websites about Willem 'sGravesande: