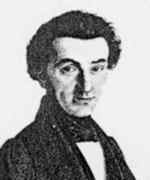 Heinrich Scherk, the son of a foreman, was born in Poznań where he lived until he was eleven years old. At this time his family moved to Breslau where Heinrich attended elementary school, then completed his school education at the Magdalenen High School. It was at the High School that he became interested in mathematics and astronomy, topics which he worked on throughout his life. As is so often the case, it was an excellent teacher at the school who fired his enthusiasm for these subjects.

Scherk completed his school studies in 1818 and entered the University of Breslau. Despite his interest in mathematics and astronomy at school, he first studied philology, philosophy and history when he entered university. However he soon changed his courses to study the topics he had come to love at school. It was H W Brandes who taught him mathematics and astronomy at the University of Breslau, and quickly realised that Scherk had an outstanding pupil. Scherk's family was poor and did not have the funds to support him at university, although he did have an uncle and a friend of his father who both contributed to his expenses. With insufficient funds, he had to spend many hours giving private tuition in order to support himself. Brandes saw that his talented pupil was struggling financially, and was able to recommend him for a University Scholarship. This made Scherk financially secure for the two years of its duration, and allowed him to devote himself fully to his studies.

In 1820, still holding the scholarship, he went to Königsberg to study with Bessel. It was on Brandes' advice that he went to study with the famous astronomer and it certainly paid off since he wrote his first paper Parabolische Elemente des Kometen von 1818 Ⓣ under Bessel's guidance. It was published in Bode's astronomical yearbook. Although his scholarship was due to run out in 1821, Bessel was successful in arguing for an extension to a third year. Scherk's doctoral studies, in which he was advised by Bessel and Brandes, led to him submitting his doctoral thesis De evolvenda functione ... disquisitiones nonnullae analyticae Ⓣ to the University of Berlin in 1823, receiving the degree on 27 August.

Scherk taught at Halle for seven years from 1826 to 1833. Perhaps the most important of the many tasks which he carried out during this time was in supervising the doctoral studies of Kummer who received his doctorate on 10 September 1831 for his thesis De cosinuum et sinuum potestatibus secundum cosinus et sinus arcuum multiplicium evolvendis Ⓣ. Remarkably over 11,000 mathematicians can trace their academic parentage back to Scherk through Kummer. At Halle, Scherk taught a wide range of courses such as: analytic geometry of lines and the conic sections; analytic geometry of lines and surfaces of the first and second degree; algebra and algebraic geometry; plane and spherical trigonometry; integral calculus; and differential calculus and its application to algebra, analysis and geometry. His research was earning him praise and, in 1831, he was awarded a prize by the Jablonowsky Society in Leipzig for his eassy De proprietatibus superficiei quae hac continetur aequatione (1+q2)r−2pqs+(1+p2)t=0 disquisitiones analyticae Ⓣ.

On 5 July 1831 Scherk was appointed to the chair of mathematics at Halle which had been vacant since the death of Johann Friedrich Pfaff in 1825. On 13 September 1833 Scherk was appointed as a successor to N T Reimer as the ordinary professor for mathematics and astronomy at the University of Kiel. In the years 1841, 1842 and 1848 Scherk was chosen as Rector of the University of Kiel. He represented the University on a number of important occasions such as the Reformation celebrations in Copenhagen in 1836 marking 300 years since the final triumph of the Reformation in Denmark in 1536, the coronation of Christian VIII in 1840 when he was enthroned as king of Denmark, and the anniversary celebration of the University of Königsberg in 1844 to celebrate its founding by Albert, the first duke of Prussia, in 1544.

In 1840 Scherk was made a Knight of the Order of Dannebrog, the second highest honour in Denmark (Dannebrog is the name for the Danish flag). Bessel died in March 1846 and later that year, at the annual meeting of the Association of German Natural Scientists and Physicians in Kiel, Scherk gave a fine speech in his memory.

Kiel was the capital of Schleswig-Holstein and this was a region which had been the cause of many disputes over a long period; in the 19th century this was known as the Schleswig-Holstein question. Holstein became part of the German Federation in 1815, while Schleswig was associated with Denmark. The two regions had historic links, and Schleswig had a sizeable German speaking minority, also Holstein had a small Danish speaking minority. In 1848 there was an uprising by the German speaking minorities in Schleswig-Holstein demanding independence from Denmark. Prussia intervened to support the uprising which led to a war which lasted from 1848 to 1850. Scherk, however, was a German patriot and one of the three supervisors of the first German sea-cadet school in Kiel set up in 1848, where he was head of mathematics training. This, however, was to lead to problems for Scherk when the political treaty to end the war was agreed. The major powers pressured Prussia into accepting the London Convention of 1852 which required the German Federation to give Schleswig-Holstein to Denmark. On 4 June 1852 Scherk, together with seven other colleagues, were dismissed by the University of Kiel for political reasons. However, it was done:-

... without indication of a substantial reason, without judgement and right, and without a preceding investigation.

It is clear, however, that Scherk's German patriotism was unacceptable in the now Danish Schleswig-Holstein. The Faculty of Philosophy at the University of Halle tried unsuccessfully to reappoint Scherk, and attempts at Kiel to have him reinstated in his former post were equally unsuccessful. In the autumn of 1852 Scherk left Kiel and went to Dresden where he gave private tuition at the Blochmann Institute.

On 12 December 1854 Scherk was appointed as director of the Höheren Gewerbeschule in Bremen. The School was then just reopening after a period of closure and, in 1857, it was forced to close again. In the following year Scherk was appointed as a teacher at the Handelsschule (part of the High School) in Bremen. At first this was only a temporary appointment but it became a permanent one on 22 May 1863. He spent the final ten years of his career in this position, retiring in 1874. During his years in Bremen he gave many popular lectures to the Scientific Association. These included talks on astronomy on topics such as: meteors and comets; the movements of the nebulas; the distance between the sun and earth; sunspots; the determination of the parallax of the sun with the transit of the Venus on 16 March 1874; and one to commemorate the 400th birthday of Nikolaus Copernicus in February 1873.

We should also note that Scherk discovered the third non-trivial examples of a minimal surface which appeared in his paper Bemerkungen über die kleinste Fläche innerhalb gegebener Grenzen Ⓣ published in Crelle's Journal. The first two examples, the catenoid and the helicoid (also called the screw surface), had been found by the Frenchman Jean Baptiste Marie Meusnier in 1776. The catenoid arises from rotating the catenary curve about a horizontal line. Scherk's result was certainly seen as a major breakthough and brought him considerable fame; two surfaces, Scherk's First Surface and Scherk's Second Surface, as they are named today, are studied in the paper. Scherk's doubly periodic surface is the first example of a complete, embedded, doubly periodic minimal surface. His minimal surfaces have recently been the basis of sculptures by the American artist Brent Collins who has based many of his works on Scherk's second minimal surface.

Another contribution by Scherk is still important today, namely his work on the distribution of the prime numbers.
Other Mathematicians born in Poland
A Poster of Heinrich Scherk

Other websites about Heinrich Scherk: