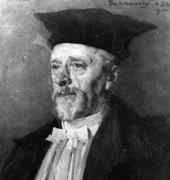 Pieter Hendrik Schoute was the son of Dirk Schoute (1791-1861) and Cornelia Oosterhuijs (1802-1875), both from Wormerveer, who had married in Wormerveer on 26 October 1823. The Schoute family were industrialists who had a business near Amsterdam. Dirk Schoute's parents were Cornelis Schoute and Grietje Baars, while Cornelia Oosterhuijs's parents were Hendrik Oosterhuijs and Aagje Langewis. At the time of Dirk and Cornelia's marriage, Dirk was described as a clerk, but the family fortunes changed in 1843 when Dirk Schoute began processing cocoa. The business flourished and the Wormerveer factory began making chocolate products which were exported to various European countries. Pieter Hendrik was the youngest of his parents' three sons, the older two being Cornelis (1835-1911) and Dirk (1838-1899).

He studied at the Polytechnic in Delft, graduating as a civil engineer in 1867. After graduating, Schoute went to Leiden to undertake research in mathematics. His doctorate was awarded by Leiden in 1870 for a dissertation Homography applied to the theory of quadric surfaces. After being awarded his doctorate, Schoute taught mathematics in a secondary school in Nijmegen from 1871 until 1874. While teaching in Nijmegen he married Mathilde Pekelharing (1846-1930); they had six children, Dirk (1873-1953), Cornelis (1874-1960), Anna Cornelia (1875-1976), Johannes Cornelis (1877-1942), Agatha Cornelia (1879-1968), and Baltus Hendrik who was born in 1884 but did not reach adulthood dying at the age of five. The family moved to The Hague in 1874 where again Schoute taught mathematics in a secondary school. From 1881 until his death he was professor of mathematics at the University of Groningen.

Schoute studied various topics in geometry such as quadrics and algebraic curves. Dirk Struik writes in [1]:-

Schoute was a typical geometer. In his early work he investigated quadrics, algebraic curves, complexes, and congruences in the spirit of nineteenth-century projective, metrical, and enumerative geometry.

From 1891 Schoute studied Euclidean geometry of more than 3 dimensions, writing 28 papers, some jointly with Alica Boole Stott, the daughter of George Boole, such as On the sections of a block of eightcells by a space rotating about a plane. It was his research on regular polytopes, which generalise the concept of regular polyhedra, that led to the collaboration between Schoute and Stott. J S Joel, reviewing Coxeter's article [3], writes:-

Schläfli's work of the 1850's was brought to the Netherlands by Pieter Hendrik Schoute (1846-1913) who, in three papers beginning in 1893 and in his elegant two-volume textbook on many-dimensional geometry 'Mehrdimensionale Geometrie' (2 volumes 1902, 1905), studied the sections and projections of regular polytopes and compound polyhedra. ... Alicia Boole Stott (1870-1940), George Boole's third daughter (of five), ... studied sections of four- and higher-dimensional polytopes after her husband showed her Schoute's 1893 paper, and Schoute later (in his last papers) gave an analytic treatment of her constructions.

According to the preface, the author was forced, for lack of space, to compress his manuscript into about three-fourths of the original number of pages; and this accounts for the occasionally rather too compact form of the argument. The subject-matter corresponds roughly to the work given, for ordinary space, in such books as Nixon's 'Geometry in Space'. The book contains extensions of Euler's theorem, of the theory of regular polyhedra, of spherical geometry, and so on; the work is well illustrated by numerous carefully drawn figures. We may mention specially the figures, for ordinary space, of the regular and semi-regular solids.

The articles [3] and [5] are published in the journal Nieuw Archief Wiskunde. Schoute was an editor of this journal from 1898 until his death in 1913. He was also a founding editor of Revue semestrielle des publications mathématiques from 1893, when the journal was founded, again until his death in 1913. George Bruce Halsted, writing about the Caen Congress of August 1894, remarks:-

We are happy to mention the decided advancement of the 'Repertoire bibliographique des Sciences mathématique', and in this connection, to applaud the interesting publication, due to a group of mathematicians in Holland, especially P H Schoute, which is entitled 'Revue Semestrielle des Publications Mathématique'.

Finally we should note another publication by Schoute on a totally different topic, namely the reclamation of the Zuiderzee. His article, published in the Geographical Journal in 1893. He writes:-

The question of the reclamation of land now covered by the Zuiderzee is no new one, but it is only recently that a thoroughly practicable scheme has been matured for the accomplishment of this great engineering feat. In 1886 a Committee was appointed to consider and report upon the question ...

After giving details of the scheme, which he strongly supported, Schoute ends his article with the report:-

Recently (8 September 1892) the Dutch Government has appointed a new Committee to report upon the scheme worked out by the Committee of 1886 ...

In fact the scheme was put into effect, but only after a serious flood in 1916 concentrated people's minds. Work began in 1927, fourteen years after Schoute's death.

Schoute was elected to the Royal Netherlands Academy of Sciences in 1886.
Other Mathematicians born in Netherlands
A Poster of Pieter Hendrik Schoute

Other pages about Pieter Hendrik Schoute:

Other websites about Pieter Hendrik Schoute: