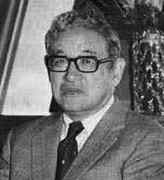 Kenjiro Shoda was born in Tatebayashi in the Gunma Prefecture of Japan but he underwent schooling in Tokyo until he completed middle school. There were academies in Japan for the brightest pupils with the task of preparing them for a university education. Shoda, after showing great talents at middle school, attended the Eighth National Senior High School in Nagoya.

After graduating from the Eighth High School, Shoda entered Tokyo Imperial University (the title 'Imperial' would soon be dropped from the name of all Japanese universities) and there he was taught by Takagi. This was an exciting period to study at Tokyo University for Takagi had published his famous paper on class field theory in 1920. Takagi lectured on group theory, representation theory, Galois theory, and algebraic number theory. When Shoda was in his final undergraduate year, his studies were supervised by Takagi and he inspired Shoda to work on algebra. Shoda graduated from the Department of Mathematics at Tokyo University in 1925 and began his graduate studies under Takagi's supervision.

During his first year of graduate studies he read works on the theory of group representations by Frobenius and Schur. Then in 1926, his second year of study, he was awarded a scholarship to allow him to study in Germany and he set off for Berlin to work with Schur. While in Berlin he attended Schur's lectures and had his first mathematical success in research discovering an interesting result on matrices. After a year in Berlin, Shoda went to Göttingen where he joined Emmy Noether's school, attending her lectures on hypercomplex systems and representation theory. Nagao writes [1]:-

This particular year seems to mark the most significant period in his mathematical growth. There, near Noether, he witnessed the remarkable process of creation of great mathematical ideas and theory, and youthful Shoda buried himself in enthusiastic pursuit of mathematics in a wonderful creative atmosphere generated by the many young, able mathematicians who had come from all over the world to Göttingen, attracted by Emmy Noether.

Shoda returned to Japan in 1929 and almost immediately began to write his algebra book. Abstract algebra, an advanced-level textbook of modern algebra, was first published in 1932 and it proved a very significant work for Japanese mathematics. The twelfth printing of the book was published in Tokyo in 1971 with the chapter headings: Basic concepts; Field theory; Galois theory; Elimination theory; General ideal theory; Valuation theory.

This fine work, published in 1932, must have been a significant factor in Shoda being appointed as professor in the Faculty of Science at Osaka University in 1933. He had also published twelve papers on groups and rings before he was appointed to this post.

The war years were particularly difficult ones in Japan and many Japanese mathematicians failed to keep their research going through these difficult times. Shoda, however, managed to continue to undertake research and in 1946 he was elected the first Chairman of the Mathematical Society of Japan. In this role he had the task of reconstructing Japanese mathematics and he did this in many ways, one of which was to lead by example with some fine and important publications.

In 1947 he published his text General Algebra. This text attempted to unify many existing algebraic systems. Here are some details from a review of the work by T Nakayama:-

The second chapter is on the theory of free systems, including the fundamental theorem and the theorem of change of generators (of Tietze). A theory of independence is given, making use of a certain notion of valuation so as to take care of algebraic and linear dependence, the latter being distinguished in that an element is (linearly) dependent on a set of elements if and only if it is contained in the subsystem generated by the set. Free lattices, free groups, free Lie and associative rings are treated, emphasizing the relationship among them.

The third chapter starts by proving the author's sufficient condition for a lattice of congruences to be modular ... Then the author ... develops generalized theories of normal chains, composition series, of direct and subdirect products, and generalizations of the Jordan-Holder and the Remak-Schmidt-Ore theorems. After completely reducible systems, the notions of solvable and nilpotent systems are discussed, where general identities are considered instead of the usual commutativity. Further, a set of endomorphisms of an algebraic system is considered as an algebraic system in terms of the usual multiplication (of mappings) and the compositions induced from those of the original system. Here the multiplication is of course associative, and distributive for the latter compositions, presenting the notion of ring-systems as a generalization of the ring notion. Structural theory of abstract ring-systems is developed, under chain conditions, including (generalized) Peirce decompositions and Wedderburn's theorem; for the latter the notion of matrices is also generalized.

In 1949 Shoda was awarded the Japan Academy of Science Prize in recognition of his fine achievements. In the same year he became Dean of the Faculty of Science at Osaka [1]:-

It was at this time, after the war, that Japan was going through a difficult period of transition from the old to the new educational system. Under his headship a foundation for the new Faculty of Science and the Graduate School Division for research of Science was firmly established.

In 1955 Shoda was appointed as President of Osaka University, a post he held for six years. One of his achievements as President was the setting up of a Faculty of Engineering Science at Osaka and, in 1961 after his term as President ended, he became Dean of the new Faculty.

After he retired from Osaka University, Shoda continued to work for a better educational system in Japan taking on many roles where he was able to use his long experience to give advice to many education Committees.

His death from a heart attack was very unexpected, occurring while he was driving his family to Ashikaga to see the plum blossom.

Nagao pays this tribute to Shoda in [1]:-

He loved the scholarly life and he loved his fellow man. His discipline was strict, yet his heart was warm and big. His faith in any man whom he came to know never wavered or changed. I know that the memory of this man's warm and rich humanity will live in the heart of many for a long time to come.

Other Mathematicians born in Japan
A Poster of Kenjiro Shoda

Other websites about Kenjiro Shoda: