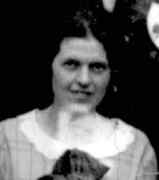 Mary Simpson lived in Newport in Fife (across the river Tay from Dundee) and there attended Newport Public School from 1906 to 1908. She then entered Portobello H. G. School in 1908 and studied there for four years before spending the next three years at Broughton J. S. Centre. On first matriculation in the Faculty of Pure Science of Edinburgh University in October 1919 she gave her Religious Denomination as Episcopalian. From 1919 to 1922 she studied for a B.Sc., the degree being awarded in July 1922.

Before she graduated with a B.Sc., Simpson had decided that she wanted to take an Honours M.A. degree and made an application to the Arts Faculty. In February 1922 she obtained the necessary permission:-

Your application has now been considered by the Faculty of Arts, and I write to inform you that you have been granted permission to take the Honours Examination although you will still require one ordinary subject. This subject you may take after your Honours work.
I am,
Yours faithfully,
ThoS. F. Harley
Assistant Secretary

Simpson first matriculated in the Arts Faculty in October 1922. At this time she gave her Religious Denomination as Episcopalian and her Nearest Relative to be Mrs A Simpson (Mother). By this time her father must have died. Her address was the same as that of her mother, 2 Ormelie Terrace, Joppa. Joppa is very close to Portobello (they are on the coast and were the seaside resorts for Edinburgh), so it is reasonable to assume she lived there when she attended Portobello H. G. School which is close to Ormelie Terrace, Joppa.

For the Ordinary subject that she was required to take, Simpson chose English. She graduated with an M.A. with First Class Honours in July 1923. In December 1923 she joined the Edinburgh Mathematical Society. She did not remain long in Edinburgh, for she was appointed by the University of St Andrews to a position in University College, Dundee in 1924. Simpson remained in that position until 1942. We do not have details of her husband, but do know that her married name was Dempster.
Other Mathematicians born in England
A Poster of Mary Simpson