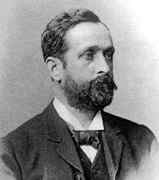 James Taylor was born in Keith which is a small town about 70 km north west of Aberdeen. His father was Robert Taylor. He was educated at Keith Grammar School then sat the Aberdeen University Bursary Competition. This involved compulsory papers on Mathematics, Latin and English. The two compulsory mathematics papers comprised one on Arithmetic and one on Euclid. He also elected to take the two special Mathematics papers, one of which was on Euclid and one on Algebra. After winning a bursary he studied at Aberdeen University, graduating in 1874 with First Class Honours in Mathematics.

In addition to his role as a teacher of mathematics, Taylor took in boys as boarders. Every year he advertised in the national press. Here is a typical such advertisement:-
DOLLAR INSTITUTION.- James Taylor, M.A. (Honours), Mathematical Master, receives Boys as Boarders, and personally superintends their Home Lessons. Terms, &c. on application.
ROSEMOUNT, Dollar.
The article [1] contains two parts. The first is an appreciation of his contributions to the school written by a colleague, the second is an appreciation by a former pupil.

Here is the appreciation written by a colleague:-

Mr James Taylor, M.A. - familiarly and affectionately known to the Dollar boys as "Jimmy" - was a native of Keith, Aberdeenshire, and was educated in his boyhood at the grammar school there. In his eighteenth year he entered, as a bursar, Aberdeen University, where he graduated in 1874, with first-class honours in Mathematics. This distinction gained for him the Mathematical Mastership of New College, Southsea, Portsmouth, but his stay there was short, as he was chosen, from a large number of candidates, to a similar position in Morison's Academy, Crieff, where he taught with much acceptance until 1878, the year of his appointment to Dollar.

His work here was the work of his life; and his memory cannot fail of exciting the warmest sentiments of gratitude among those who were his pupils while the smallest regard for learning subsists among them; and, by those who had the pleasure of his friendship, his name will always be mentioned with honour. From the first he was a favourite with his pupils, and he retained the respect and affection of the members of all his various classes throughout the whole of his thirty-two years as their teacher.

A former pupil writes: "The pains he took to make the veriest duffer see through his problems was very great. He was tireless in this respect, and many pupils have to thank him for the grounding they got under his excellent tuition."

Among his colleagues he was full of geniality, took a frank part in educational controversy, but may have over-rated the value of the study of Mathematics and Science as compared with that of Classics and Modern Languages.

When Mr Taylor took pen in hand, he showed that he possessed the gift of lucid expression, as is illustrated in the series of articles on "The Transit of Venus" in 1882, which he contributed to The Dollar Magazine of that year. Other articles of his prove that he had a firm grasp of the subject he was handling, and he was able to unfold his meaning clearly, fully, ad distinctly.

Short and fragmentary is the account I have been able to give of one who may be said to have died at his post, doing his duty to the last. I wish, particularly in the name of those most nearly related to him, to off all his old pupils grateful acknowledgement of their loyalty, affection, and generous appreciation of him as their teacher and friend.

The Edinburgh Mathematical Society was founded in February 1883 and Taylor was present at the first meeting, becoming a founder member. He remained a member of the Society until around 1898. Somewhat confusingly another James Taylor, who was a Mathematical Master at Edinburgh Academy, joined the Society in November 1886 so for around 12 years the Society had the rather confusing situation of having two members with precisely the same name (neither appears to have had a middle name).

Other Mathematicians born in Scotland
A Poster of James Taylor

Other websites about James Taylor: