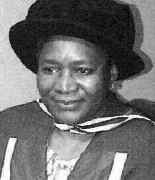 Olabisi Ugbebor was given the name Grace Olabisi Falode; she adopted the name Olabisi Ugbebor, by which she is now known, after her marriage to the engineer Curtis Ugbebor in 1972. For the sake of simplicity we will refer to her as Ugbebor throughout this biography. Her father was a manager of G B Ollivant (Nigeria) Ltd. This firm started when George Bent Ollivant, from Manchester, England, set up a business in 1858 to trade cotton goods but soon expanded into other goods. Factories were set up in Nigeria (and other countries) and in 1954 the Nigerian operation became a locally registered company G B Ollivant (Nigeria) Ltd.

She attended a Awolowo school, a free primary school set up by Obafemi Awolowo, who played a key role in Nigeria's independence movement. The year in which she was to complete her primary education, G B Ollivant (Nigeria) Ltd. instituted a scholarship which was to support the schooling of children of members of its staff. Three children of the firm competed for this first scholarship, two boys and Ugbebor. She performed best of the three and was awarded the scholarship to attend Queen's College in Yaba, a suburb of Lagos. Queen's College, a girls school founded in 1927, is considered by many to be the best girls' high school in Nigeria. She entered Queen's College in 1962 completing the first part of her education in 1966 when she took her O level examinations. The G B Ollivant's Scholarship was only supposed to cover education through these five forms up to O level but, when her results were seen to be outstanding, the G B Ollivant's Scholarship was extended for a further two years to allow her to remain at Queen's College for the Higher School Certificate.

The government had a policy that if a student was equally good as arts and science subjects then if they took their education further they had to follow the sciences. This policy was made in an attempt to fill the need for science and technology to support the development of Nigeria. Ugbebor had top marks in French and her French teacher wanted her to take A level French but, since Ugbebor was equally good at science, the government policy determined that she take A levels in science subjects. She was not unhappy about this since all through her schooling she had loved mathematics. She said [1]:-

Moreover, why did I choose to teach mathematics? Many of my classmates who could not understand geometry and things like that, after school hours - because Queen's College is a boarding school - they would come; they were humble. They would ask, "how did you see all those lines and graphs because we didn't see anything?" So I would stand at the board after school hours and explain it to them.

At Queen's College she was a School Prefect in 1967, House Captain of Obi House (1967-68), and Deputy Head Girl in 1968. She was awarded the Cambridge Higher School Certificate having taken examinations in Pure Mathematics, Applied Mathematics, Physics, Chemistry and a General Paper. She was awarded a Federal Government Scholarship to attend the University of Ibadan and she began her studies there in 1969. She was the only female student in the class of seven. In [1] she spoke about her experiences:-

When I entered the University of Ibadan, I was the only girl in class. And the lecturer said, "who can solve this?" I went to the board and solved it. The boys said: "We are here, how dare you?" I said, "Look, I came from Queen's College, we used to compete among ourselves so, you have to change your dirty and negative orientation. You cannot stop me." What if it was somebody who could be intimidated? That would have been the end. I told them, "I am not used to that kind of thinking because where I come from we are all equals. And we all compete on top of the table, no cheating, so don't come and cheat me." They took me for who I was and respected me. So you have to encourage people by first of all putting down that stereotype.

She graduated with a B.Sc. with Honours in 1972 and was awarded a University of Ibadan Scholarship to continue her studies at University College, London. In the same year of 1972 she married the engineer Curtis Ugbebor.

At University College, London, she studied for the year 1972-73 for a Postgraduate Diploma in Statistics which she was awarded at the end of the course. She then continued to study at University College for a Ph.D. advised by Samuel James Taylor. Known as "James", Taylor had been born in Northern Ireland in 1929 but had spent the first ten years of his life being home schooled in Nigeria where his parents were missionaries. After a B.Sc. from Queen's University, Belfast (1950) and a Ph.D. from Cambridge (1954) supervised by Abram Besicovitch, he taught at the University of Birmingham before being appointed to Westfield College, London in 1962.

There were difficult times for Ugbebor studying for a Ph.D. as she explained in the interview [1]:-

... when I was doing my Ph.D. in London, my first two sons were born there. Suddenly, they reacted to the weather. And my mother said, "send them home." ... You are washing nappies, you are breastfeeding; they say we should be doing baby friendly. It is good, but it takes your time - waking up at night and so on. Even after people can carry the baby for you, you still have to get back inside that research ...

... they called all of us, and they said, "how many of you are going back to the university level to teach?" I raised my hand. So, there was a special workshop that was arranged. They said which is the driest subject that people find difficult to understand at that level? That is algebra. So they assembled some random people who hated algebra to the core and said I should teach them the concept. They all passed, so they said I can teach at all levels; not only the university, that I must teach at all levels since I have the gift of imparting knowledge.

Ugbebor has published papers and books on a wide variety of topics. We list as many of these publications as we have been able to find at THIS LINK.

Let us end this biography by quoting from Ugbebor about the challenge of teaching mathematics [1]:-

Do you know why there is a challenge? We use letters, figures, diagrams, graphs, and these things look strange to many people. They don't make it exciting; that is why. They make it like rote learning. When you give the background, you make it exciting. You give room for questions - you explain it over and over again, then you see that mathematics is a lively subject which everybody should do up to a particular level because we all use it directly and indirectly.

If they are not properly introduced to what these symbols are, it is like we are in a secret society. But it is not that difficult. (Mathematics) is abstract; that is why people run away from it. Before going to the abstract, you start from the concrete.

Informally, I have been called to all kinds of places to motivate their teachers. There was a school that asked me to motivate their teachers recently. They hate hearing matrices. I started with oranges and bananas before I went into matrices. They started running to the board to find inverse. They said we didn't know matrices was our friend. You know when you go there you write row and column and start multiplying in a funny way. Then they say, "e gba mi" (wow!); but I started with oranges and bananas. We did some simple ones. Then, I showed them why if we were using that simple method for a larger collection, we would be there all day. So, I showed them how the matrices are now their friend to help them jump over (the long process). They loved it. People who know me, know that I have a gift and talent, they invite me to motivate their teachers. And all my students usually say, "I am going to use mama's method when I return." They have all changed their method of teaching mathematics because they saw the impact on their lives.

Another thing is, I don't lecture; I teach. The first rule in my class is you must not laugh at any question. This is so that they can ask questions that are burning in their hearts. To you, it may be stupid but to him if he does not cross that hurdle, I have lost him. If you are absent from my class once, you feel it because every question that was asked is part of your knowledge.

There was some research that was done recently - an inter-departmental research - and one of the findings was that many girls lost interest in mathematics by primary four. Is that not a disaster? One of the problems is that if you have a class teacher teaching all subjects, she is not a specialist in mathematics, she probably hates mathematics, she will regurgitate the way it was taught her without explanation and they will lose interest. So, I am suggesting that mathematics majors should teach mathematics from primary school. The reason is if you choose mathematics as a subject you love, you are enthusiastic about it. And we need that enthusiasm. Mathematics can be abstract but let a mathematics major teach from primary school level so that he or she can fire their imagination. But once you lose them from primary four, just forget it. You need someone who can go to the board and show them why, not just how. Why is this? When students ask why, you should be able to explain to them. Then they would want to know more. I believe that using a general subject for all subject teachers would not help to solve that problem.

Other Mathematicians born in Nigeria

Other pages about Olabisi Ugbebor:

Other websites about Olabisi Ugbebor: