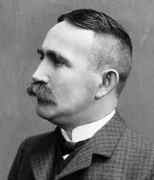 Anders Wiman's parents were land owning farmers and were financially well off. They owned one of the large farms close to the village of Hammarlöv in the south of Sweden. Note that most biographies of Wiman give (incorrectly) his place of birth as Hammerlöf. Anders attended school in Lund, graduating from the secondary school in that city in 1885. Åke Pleijel writes [3]:-

Wiman was the only member of his rural family who went to study. One reason was that he was not considered suited for work in the fields.

He entered the University of Lund in the autumn of 1885 and, as well as mathematics, he studied botany and Latin for his first degree. He was awarded his Bachelor's degree in 1887 and his Licentiate in 1891. Continuing to study for his doctorate at Lund he was advised by Carl Fabian Emanuel Björling (1839-1910) who had also taught him through his earlier university years.

Björling, the son of the mathematician Emanuel Gabriel Björling (1808-1872), had studied at Uppsala and was appointed as professor of mathematics at Lund in 1873. He then devised the four-year mathematics course that Wiman followed, which put emphasise on function theory and particularly on a full range of geometric topics. He strongly influenced Wiman and so it is useful to quote from Björling's obituary about his qualities as a teacher:-

Björling's lectures were brilliant from a formal point of view. He had an unusual ability to express his thoughts easily, correctly and in a stimulating way. In contrast he was not to the same degree rigorous - neither orally nor in writing. Although equipped with a sharp intelligence and wit, it can be said that he was more gifted for reviewing and rounding off than for abstraction and strict reasoning. This feature is apparent in his remarkable textbooks.

Björling was interested in algebraic geometry so it was a natural topic for him to give to his research students. One of Björling's students, Jakob Bergstedt, wrote a doctoral thesis which he completed in 1886 while Wiman was still an undergraduate. Björling had suggested that Bergstedt attempt to classify ruled surfaces of degree six. He achieved some significant results, well worthy of a doctorate, but failed to classify such surfaces. It was, therefore, a natural topic for Björling to suggest that Wiman study to see if he could succeed where Bergstedt had fallen short. Indeed, Wiman did succeed and submitted his thesis Klassifikation af regelytorna af sjette graden Ⓣ in 1892. Lars Gårding writes in [2]:-

Wiman used methods where the ruled surface is mapped onto a space curve in different ways. ... There are many details and technicalities in the 109 pages of this thesis ... Wiman's thesis is written in Swedish and hardly ever quoted, but it is a fine achievement and shows the sharp intellect and strong character of the author.

Wiman was appointed as a docent in mathematics at the University of Lund in 1892. This is, in the Swedish system, essentially the equivalent of an assistant lecturer. He was formally awarded his doctorate in 1893 and undertook impressive work on the classification of finite geometrical groups over the last years of the 19th century. He published four papers (all in German) in 1895. Two of these, Über die hyperelliptischen Curven und diejenigen vom Geschlechte p = 3, welche eindeutige Transformationen in sich zulassen Ⓣ and Über die algebraischen Curven von den Geschlechtern p = 4, 5 und 6, welche eindeutige Transformationen in sich besitzen Ⓣ mark the start of Wiman's work on group theory. In these he classified all algebraic curves of genus 3, 4, 5 and 6 which have non-trivial algebraic automorphisms. In Über eine einfache Gruppe von 360 ebenen Collineationen Ⓣ (1896) he proved that a certain group of order 360, which he showed isomorphic to the alternating group of degree 6, had been omitted by Camille Jordan in his classification of the groups of projective bijections of the complex projective plane.

A paper on probability theory Über eine Wahrscheinlichkeitsaufgabe bei Kettenbruchentwickelungen Ⓣ, which Wiman probably did not consider particularly important, appeared in 1900. The background to this paper was a remark in a paper by Hugo Gyldén, a Swedish astronomer, where he introduced approximations to small denominators using a probabilistic argument. Torsten Brodén, at that time a docent at Lund, had tried to revise Gyldén's work in a more rigorous fashion but Wiman was unhappy with Brodén's approach. In his own paper, which was a second attempt to put Gyldén's work on a rigorous basis, Wiman applied measure theory to the probabilistic problem. He was the first to do so and his work influenced Émile Borel to work on such questions. For more details, see [6] and [7] where theories are put forward as to how Borel learnt of Wiman's paper.

In 1900, Alexander Fredrik Berger (1844-1901) was working as a docent and acting professor at Uppsala. An extraordinary professorship in algebra and number theory was created by Uppsala, essentially designed to give Berger a chair. He had written a paper on the distribution of primes in 1875, but his paper follows closely an 1852 paper by Chebyshev, and fails to even reference Chebyshev's paper. As Gårding writes [2], "it gives the reader a bad feeling". Berger had continued to write articles on number theory which surveyed the results by other mathematicians, yet Berger's papers contain no references. The extraordinary professorship at Uppsala was advertised and there were three applicants, Berger, von Koch and Wiman. The appointing committee consisted of Edvard Rudolf Neovius (1851-1917), Ludwig Sylow and Gösta Mittag-Leffler. They reviewed the work of the applicants and placed Wiman as their first choice, with von Koch in second place. This was not a judgment on the absolute merits of Wiman and von Koch as mathematicians, but rather an argument that both were fine mathematicians with von Koch's expertise being more in analysis than in algebra and number theory. This, of course, was not the result that Uppsala University had wanted since the extraordinary professorship had been created specifically to give Berger a chair. The faculty asked the professor of mathematics, Matths Falk (1841-1920), to judge the three applicants and he, unsurprisingly, put Berger at the top of the list. It looked as though a rather serious argument was about to take place but, at this point, Berger suddenly died at the age of 57. The extraordinary professorship in algebra and number theory was offered to Wiman who happily accepted taking up the appointment on 5 December 1901.

One of the topics that Wiman studied was the solubility of algebraic equations. For example, in Über die metacyklischen Gleichungen von Primzahlgrad Ⓣ published in the volume of Acta Mathematica dedicated to the memory of Niels Abel, he studied the Galois group of soluble equations of prime degree. He also worked on entire functions publishing, for example, Über die durch Radikale auflösbaren Gleichungen neunten Grades Ⓣ (1904). Björling, the professor at Lund who had taught Wiman during his years there, retired in 1906 and Wiman was keen to return to his alma mater. The position would also be a more senior one for this was an ordinary professorship at Lund while he only held an extraordinary professorship at Uppsala. Wiman [2]:-

... entrusted a friend with the task of delivering the necessary papers to the university authorities. But the friend was one day late and that is why Wiman, who had been the natural first choice, could not return to his alma mater.

Torsten Brodén, who we mentioned above in connection with Wiman's use of measure theory in questions of probability, was appointed to the chair at Lund. However, Wiman did not have to wait long for an ordinary professorship since Uppsala promoted him to that position in 1906, shortly after his disappointment with failing to be considered for the chair at Lund. He held the chair at Uppsala until he was made professor emeritus in 1929. He continued to teach for a while after becoming professor emeritus.

We have mentioned some of the topics that Wiman worked on, but it is worth noting the lasting influence that his contributions have made. One mark of this is the fact that MathSciNet lists around 100 papers with a concept named after Wiman in the title. For example, Wiman-Valiron theory, Wiman-Valiron discs, Wiman theorems for quasiregular mappings, Wiman surfaces, the Wiman inequality, Wiman's sextic, the Wiman-Valiron method for difference equations, the conjecture of Wiman, and the Wiman bound.

Let us look now at Wiman's character and his influence on those around him. Gårding writes in [2]:-

He never married and led a quiet life of study and research in the circle of his students who gave him many signs of appreciation and friendship.

Åke Pleijel, who became a professor at the Royal Technical Institute in Stockholm in 1947, later moving to Lund and finally to a chair at Uppsala, writes [3]:-

Wiman was by nature unassuming but with a firm self-confidence. His vivid interest in people was a decisive factor in his behaviour towards the many students whom he took care of during his time as a professor. He was not a fluent talker, his speech was slow and came in spurts accompanied by vivid movements of his hands and fingers. His judgement of people and events was sharp and to the point. Wiman was the only member of his rural family who went to study. One reason was that he was not considered suited for work in the fields. Wiman often talked about this with a shade of disappointment. Otherwise Wiman looked on the world with a positive eye - he was a composed and harmonic human being of a kind rarely met.

During his thirty years as a professor Wiman had a major influence on the development of university education in mathematics. By modernizing this teaching, he inaugurated a new era. His lessons were characterized by accuracy, by clarity and by their pedagogical presentation. Thirty of his students have defended their doctoral theses.

Wiman, throughout his life, maintained a keen interest in the teaching of mathematics in secondary schools. For 25 years he was a censor for the final examinations in Swedish schools.

Classical languages were Wiman's greatest interest outside the mathematical sciences. His knowledge in this area was vast and sound.

Personally, he was a quiet man, precise and devoid of vanity. All those who knew him will keep the memory of a very friendly and very generous man, gifted with a splendid sense of humour. One listened with pleasure to his wise and well-founded opinions on art, on science, on politics and on men.

We should add a few comments to clarify these comments by Trygve Nagell. First let us say a little about Wiman's doctoral students. His first doctoral students worked on problems with entire functions, but later students wrote theses looking at problems in group theory, irreducibility criteria for polynomials with integer coefficients, and algebraic geometry. Among these students we mention Fritz Carlson. Wiman also taught Arne Beurling and influenced him greatly, but had retired before Beurling submitted his thesis. Next let us explain Wiman's role as a censor for the final examinations in Swedish schools. This now historic activity started in 1862 when the universities ceased to have entrance examinations and ended in 1968. The replacement was a flying inspection in which teams of university professors went to the secondary schools as auditors of the oral examinations and censors when the grades were decided.

Although Wiman spent a few years in Uppsala after he retired, he eventually returned to Lund and spent his final years there.
Other Mathematicians born in Sweden
A Poster of Anders Wiman

Other websites about Anders Wiman: