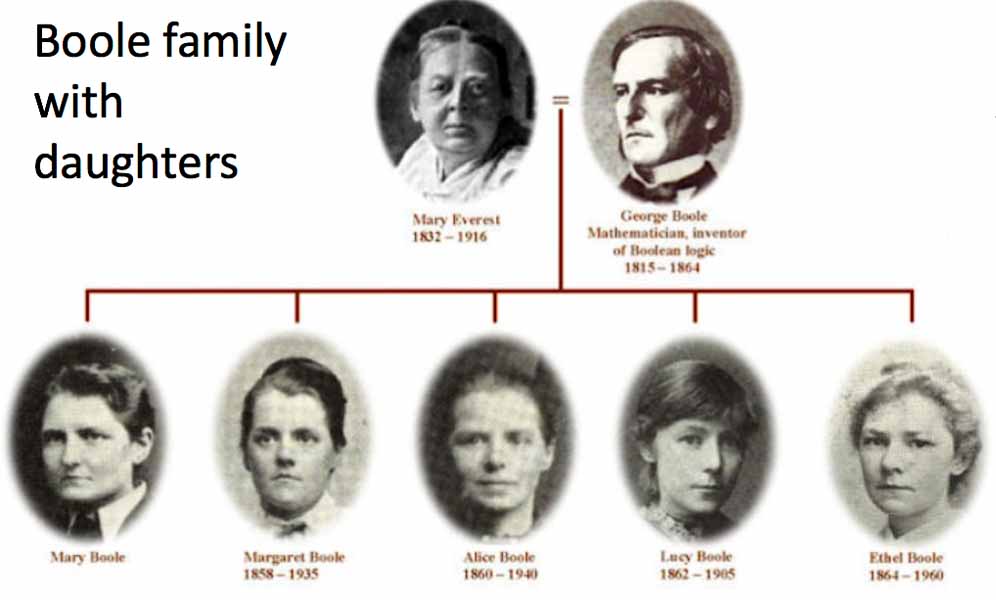 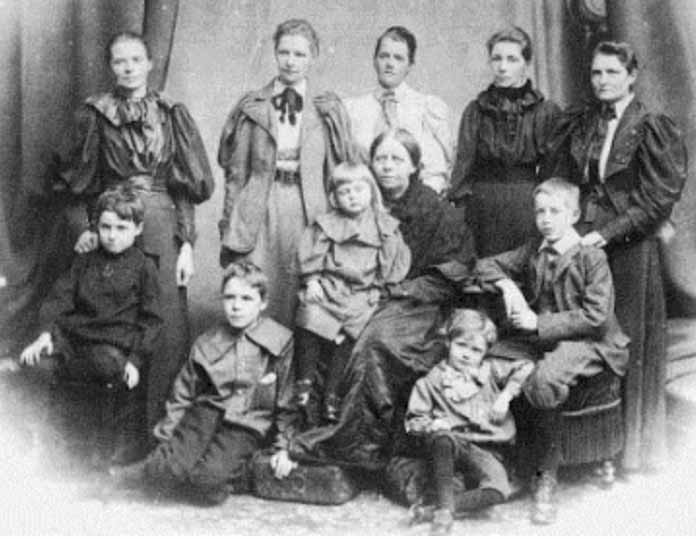 All five children are living at 45 Harley Street, Marylebone, London.

There are another six women in the house all aged between 16 and 30. The Boole girls give their relation to the head of the house as daughter, but the census had misinterpreted this since one assumes the head is their mother who is living with her uncle Robert Everest in Sunninghill, Berkshire, at this time. All five Boole girls are described as "Scholar at College." The two addresses, 43 and 45 Harley Street have been put together and must form a large single unit housing people associated with Queen's College, London.

Alicia Boole is described as "visitor" at the home of Charles H Hinton and his wife Mary Ellen Boole Hinton at Stockerston Road, Uppingham, Rutland.

Lucy Boole is living at 21 Elm Grove, Hammersmith, London and is described as a scholar.

Ethel Lilian Boole is at 166 The Grove, Camberwell, London. Described as a Teacher of Music.

Mary Boole is at Station Road, Teynham, Kent. Mary Everest, her mother, is head of the household. Rather strangely, she describes her relationship to Mary Everest as "visitor". Also in Station Road (next door) is living Mary Boole's brother George Everest, curate of Teynham, Kent and his wife Susan. Mary is described as "living on her own means".

Margaret Boole Taylor is living at 10 Blenheim Villas, Marylebone, London with her husband Edward I Taylor, the famous artist. Their son Geoffrey Ingram Taylor (age 5) and son Julian Taylor (age 2) are living with them.

Alicia Boole Stott and her husband are living at 45 Carrington Place, North Toxteth, Liverpool. Both she and her husband, an actuary, are described as lodgers in the home of Ann Owens, her daughter and granddaughter.

Lucy Boole is at 103 Seymour Place, Marylebone, London, described as an analytical chemist. She claims to be the daughter of the head of the house which seems to have been misinterpreted.

Mary Boole is living at 16 Ladbroke Road, Notting Hill, Kensington, London. She is described as "living on her own means".

Margaret Boole Taylor is living at 48 Blenheim Terrace, Marylebone, London with her husband Edward I Taylor, the famous artist. Their son Geoffrey Ingram Taylor (age 15) and son Julian Taylor (age 12) are living with them.

Lucy Boole is in Cranham Sanatorium, Cramham, Gloucester. Described as a patient and a teacher of chemistry.

Ethel Lilian Boole is married to Wilfred Michael Voynich, a Polish author. They are living in Great Russell Street, Bloomsbury, London. Ethel describes herself as a novelist.

Margaret Boole Taylor is living at 48 Blenheim Terrace, Marylebone, London with her son Geoffrey Ingram Taylor. Edward I Taylor is not at this address at the census.

Alicia Boole Stott is living at 155 Withens Lane Liscard Cheshire with her husband with her children, Leonard Boole Stott (a medical student) and Mary Boole Stott.

Ethel Lilian Voynich is living with her husband at 37 St Peter's Square, Hammersmith, London. She describes herself as a 'novelist working at home'.
Last Updated May 2018