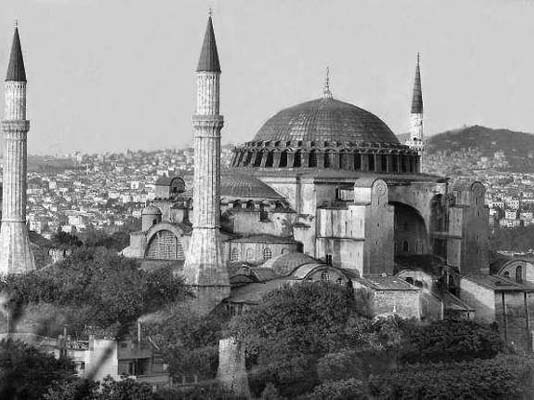 Anthemius of Tralles is known both a mathematician and an architect. As an architect he is best known for replacing the old church of Hagia Sophia at Constantinople in 532. Here we give some information on the Hagia Sophia and, in particular, in Anthemius' involvement in the project.

Procopius of Ceasarea was an historian most famous for his work History of the Wars. We quote from Procopius' work Buildings written in around 560 which describes the buildings of the Emperor Justinian's Empire. The events and buildings he describes were witnessed by him. He describes the Nika Riot of 532:-

Some men of the common herd, all the rubbish of the city, once rose up against the Emperor Justinian in Byzantium, when they brought about the rising called the Nika Insurrection. ... And by way of showing that it was not against the Emperor alone that they had taken up arms, but no less against God himself ... they had the audacity to set fire to the Church of the Christians, which the people of Byzantium call "Sophia". ... So the whole church at that time lay a charred mass of ruins.

Now the Emperor Justinian wanted to rebuild the church in a style that far exceeded the capabilities of any architect of his time. He had the good sense to turn to someone who was not trained as an architect but who was a scholar, knowledgeable in mathematics, statics and dynamics. This person was Anthemius of Tralles, but in Anthemius the Emperor employed someone who was not only a skilled mathematician, but also someone with an artistic genius. Mathematical skills, the ability to teach the builders to accomplish the required tasks, the daring of an innovator, and the vision of an artistic genius combined in Anthemius to produce one of the most beautiful buildings the world has seen.

Procopius of Ceasarea writes in Buildings :-

... the Emperor, disregarding all questions of expense, eagerly pressed on to begin the work of construction, and began to gather all the artisans from the whole world. And Anthemius of Tralles, the most learned man in the skilled craft which is known as the art of building, not only of all his contemporaries, but also when compared with those who had lived long before him, ministered to the Emperor's enthusiasm, duly regulating the tasks of the various artisans, and preparing in advance designs of the future construction ...

The Hagia Sophia, writes Procopius, "exults in an indescribable beauty". He goes on to describe the construction, only a small part of which we give here:-

A structure of masonry is built up from the ground, not made in a straight line, but gradually curving inward on its flanks and receding at the middle, so that it forms the shape of half a circle, which those who are skilled in such matters call a half cylinder; and so it rises precipitously to a height. The upper part of this structure ends in the fourth part of a sphere, and above it another crescent shaped structure rises, fitted to the adjoining parts of the building, marvellous in its grace, but by reason of the seeming insecurity of its composition altogether terrifying. For it somehow seems to float in the air on no firm basis, but to be poised aloft to the peril of those inside it. Yet actually it is braced with exceptional firmness and security. ...

Sadly the "floating roof" no longer survives. It was weakened in an earthquake in 553, the supporting arch was split by a second earthquake in 557 and the arch and dome collapsed in 558. A new dome was constructed and the Hagia Sophia restored in 563. It has continued to suffer earthquake damage ever since, in 869, in 989, in 1344, in 1766, and in 1894. The Hagia Sophia was restored on each occasion and in 1934 Anthemius of Tralles' masterpiece was opened as a museum.
Last Updated March 2000