Mathematics in St Andrews University in 1883

Staff in the Mathematics Department

The Examiners: The Professors and, in addition for Mathematics, Professor Stuart, M.A., LL.D., Cambridge, appointed 1882.


This Professorship is coeval with the foundation of the Colleges. The Professor is appointed by the University Court.

Natural Philosophy is usually studied in the Fourth Session.

The subjects of lecture are: 1. Properties of Matter and of Force, including Inertia, Gravitation, Molecular Forces, Laws of Motion. Conservation of Energy, etc.; 2. Dynamics or Mechanics, including Hydrostatics and Pneumatics; 3. Sound; 4. Heat; 5. Light; 6. Electricity; 7. Astronomy; 8. Meteorology.

The Class meets at the following hours

Examinations.- The class is examined every fortnight in writing, on Wednesdays, from 2 to 3 o'clock.

The subjects of examination, which are given to the class in writing, consist generally of propositions in the lectures or textbooks, with the addition of a few problems.

The places in the Honour and Prize List are determined by the results of the examinations.

Home Exercises.- Problems are prescribed once a month for work at home.

Private Reading.- The works prescribed for reading during the summer, for Students who enter the class the ensuing Session, will be found among the announcements for next Session, in another part of the Calendar.

The examination takes place early in November, and a prize is awarded to the best competitor.

This fund consists of a sum of £1000, presented to the University by Mrs Arnott, in memory of her husband, Dr Neil Arnott, to be termed the Neil Arnott Fund, and to be devoted to the promotion of the Experimental Study of Natural Philosophy.

In terms of the deed of foundation, the free annual income of the fund is expended in the purchase of Apparatus for the Natural Philosophy Class.


This Professorship was founded in 1668. The Professor is appointed by the Crown.

There are three Mathematical classes.

The First or Junior Class meets one hour daily for five days in the week. The subjects are - Euclid, Books I. II. III. IV. V. VI. and XI., Elements of Modern Geometry, Geometrical Conic Sections, Plane Trigonometry, Theory of Arithmetic and Elementary Algebra.

The Class meets from 10 to 11 on Thursdays for Theory of Arithmetic, use of Logarithm Tables, &c. A Tutorial Class free to members of the class meets three times a week for the benefit of those who are backward, and attendance on it is required from all who make less than 50 per cent in the examinations.

The Second Class meets one hour daily for five days in the week.
The subjects are:- Algebra, Trigonometry, Elements of Quaternions, and the Elements of Plane Co-ordinate Geometry. A Tutorial Class, free to every member of this class, meets twice a week for working examples.

The Third or Senior Class meets one hour daily for three days in the week.
The subjects are:- Co-ordinate Geometry, Differential and Integral Calculus. The course thus indicated may be varied from time to time to meet the requirements of the majority of the class.

The Duncan Prize is open for competition to Students who have attended at least the Second and Third Mathematical Classes of the United College, and who present themselves for examination at the commencement of the Session immediately following that of their attendance on the Third Class.

Here are some examination questions set at St Andrews University in Mathematics and in Natural Philosophy. 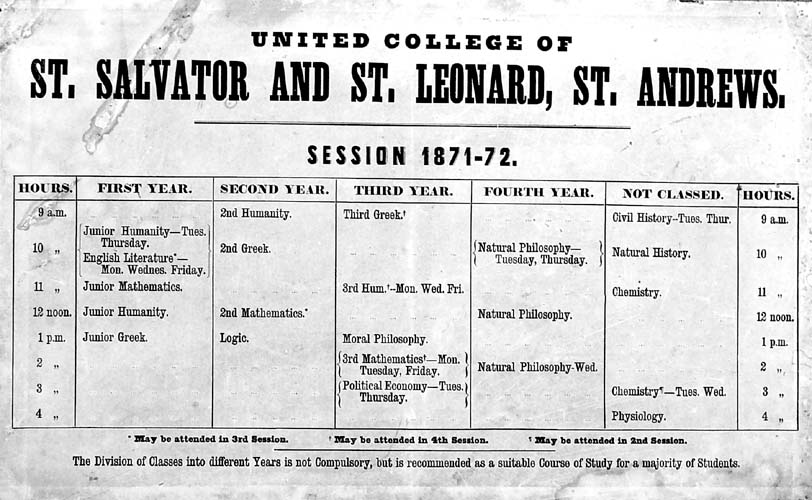