An investigation of some of D'Arcy Thompson's correspondence

Previous Page
(Correspondence I)
Contents
Next Page
(Correspondence III)
In Heilmann's response (ms19137) sent on 24th March 1915, his enthusiasm is apparent. He received the puzzle and solved it "very easily", obtaining a skull that resembled a macaque skull, as can be seen on the following sketch. 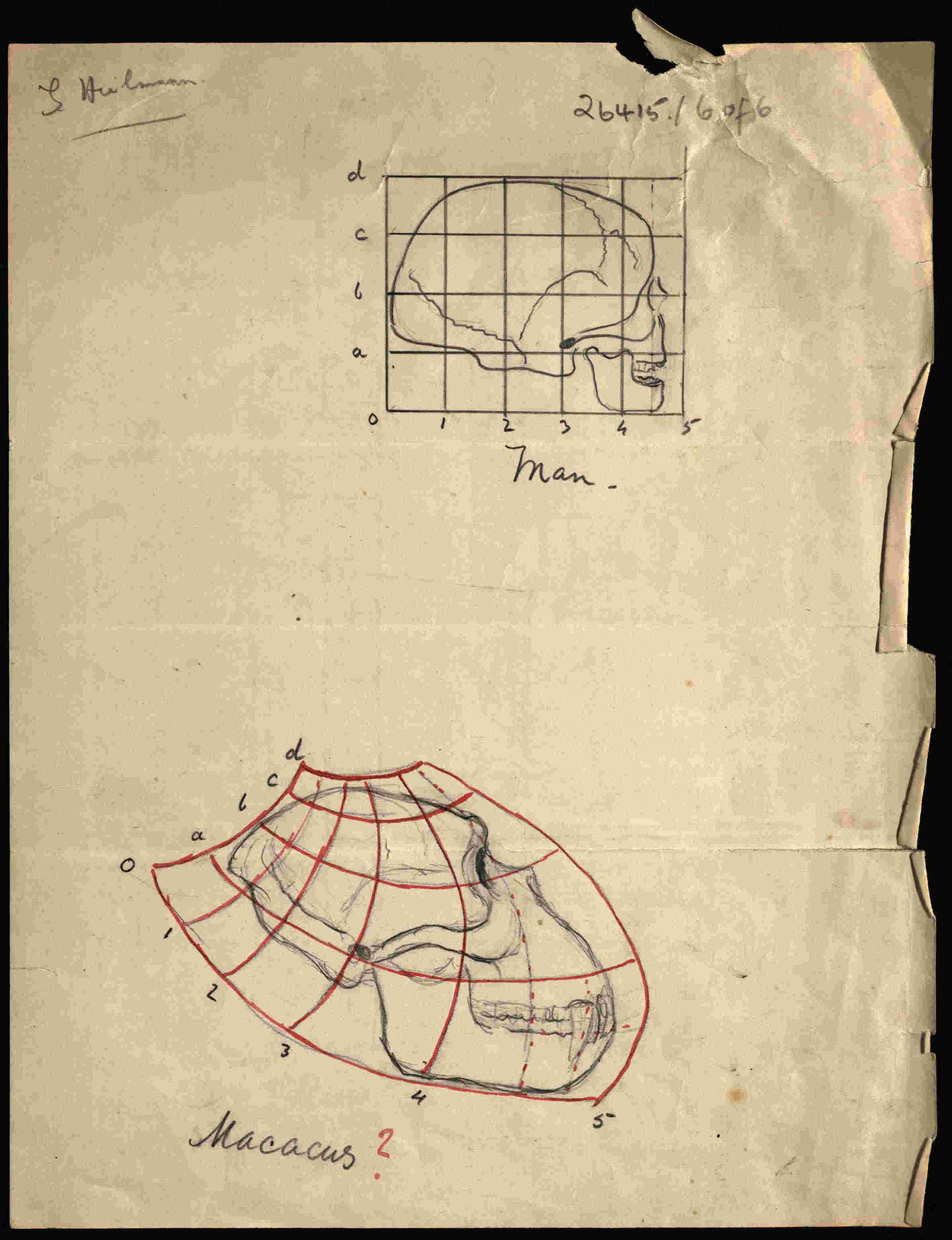 He immediately recognised the endless possibilities this method provides - he suggested using this graphical approach to trace the lineage of Equus (horses, donkeys and zebras) back to the now extinct Eohippus. He hoped to link the intermediate stages to other known animals and fossils. He also expressed his plans to use this to investigate the relationship between the bird-like dinosaurs Apatornis and Archaeopteryx. He clearly prepared his drawings prior to writing his reply to D'Arcy and he commented on the success of the method with the specimens - he stated that "it seems quite astonishing how much the pelvis of Apatornis is twisted in proportions to that of Archaeopteryx". He was undoubtedly very pleased with his success despite some of the lines taking "a rather unexpected course".

This later inspired D'Arcy to include dinosaurs (and the aforementioned sketches) in his chapter on transformations in On Growth and Form. Building on these ideas, D'Arcy went as far as to suggest that incomplete dinosaur skeletons can be re-imagined by finding related fossils and transforming them. He even put this method to the test in his chapter, and hence completed the missing section of the pelvis of Camptosaurus. Heilmann heavily contributed to this work by drawing a lot of diagrams, as even D'Arcy admitted that because of his artistic talents, Heilmann's sketches were considerably more accurate than his own.

D'Arcy was delighted that Heilmann was able to solve his puzzle as it served as reassurance to him that his method was useful. However, he was careful to point out that he felt this method had real physical implications which were not to be overlooked. D'Arcy believed that from the transformation needed to translate one form into another it would be possible to work out the "direction and magnitude of the force capable of effecting the required transformation" (On Growth and Form, page 272). He argued in this letter from 31st March 1915 (ms19138) that his method should serve as a proof against Darwinian evolution, the belief that the form of an organism develops through the natural selection of small random variations. Instead he believed that his deformations and the associated forces were enough to explain form. Also in this letter, D'Arcy sought permission from Heilmann to use his drawings of hypothetical intermediate stages between Archaeopteryx (bird-like dinosaur that lived in the Late Jurassic period around 150 million years ago) and Apatornis (prehistoric bird that lived during the Late Cretaceous period around 83.5 million years ago) in his paper Morphology and Mathematics. Much of the material from this paper went on to be used in the final chapter of On Growth and Form.