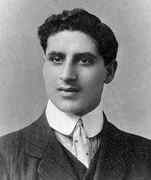 Giacomo Albanese attended school in Palermo, graduating in 1909. Then he entered the Scuola Normale Superiore in Pisa as a student of mathematics and received his doctorate in 1913 having the distinction of receiving the 'Ulisse Dini' prize for his doctoral dissertation Sistemi continui di curve sopra una superficie algebrica Ⓣ. During the time Albanese was studying at the Scola Normale Superiore, Ulisse Dini was the director of the School, but he also gave lectures on infinitesimal calculus which Albanese attended. Another of his teachers at the School was Eugenio Bertini who was a leading researcher in algebraic geometry and Albanese undertook research for his doctorate under Bertini's supervision. Following the award of his doctorate, Albanese was appointed as Dini's assistant at Pisa. However, Dini died in 1918, and following his death Albanese became an assistant to Onorato Nicoletti, an expert in the theory of Hermitian forms who took over Dini's courses on infinitesimal calculus after his death.

From 1913 to 1919, as well as his position as assistant, Albanese lectured at the Scuola Normale Superiore in Pisa but he was given leave for military service during the years 1917-18. Italy had only entered World War I in 1915 and at first they fought the Austrians with some victories and some defeats, but in 1917 German forces joined the Austrian army and the Italian army was pushed back to defensive lines near Venice. With large losses of men, Italy called up all men aged eighteen and over and at this time Albanese was called up for military service. He returned to his position in Pisa at the end of World War I but in 1919 he moved to Padua to become Francesco Severi's assistant. Although he was only to serve in this post for a few months it was to have a very significant effect both on the direction of his research and on his research output which increased markedly.

Albanese left Padua in the year 1920 to take up a professorship in analysis and algebra at the Naval Academy in Livorno which, as happened with Italian chairs, he had won after a competition. Five years later he moved to the University of Catania where he was appointed to the chair of Projective and Descriptive Geometry. Then, in 1927, he returned to Palermo where he spent the next two years. From 1929 until 1936 he held the chair of geometry at Pisa, a position which he could have continued to occupy for the rest of his life but he was sent to Brazil in 1936.

Albanese's research involved examining curves on algebraic surfaces and the genus of an algebraic variety. He considered the problem of resolution of singularities, a major problem in algebraic geometry, and produced some elegant results. He pioneered investigations related to the Riemann-Roch problem and studied the rational equivalence of 0-cycles on surfaces. His name is remembered today for Albanese varieties used as a standard tool in algebraic geometry. Guerraggio writes in [2]:-

Severi undoubtedly inspired one of [Albanese's] first works on algebraic systems of curves on algebraic surfaces, but afterwards Albanese's research turned to the problem of the resolution of the singularities of a surface and to the theory of equivalences of groups of points on a variety (and, still, to the theory of correspondences). One note of his [Trasformazione birazionale di una algebrica qualunque in un'altra priva di punti multipli Ⓣ] from 1924 presents a method - extended later to surfaces - to birationally transform a plane curve to a smooth one in the space, without singularities. In other notes from 1924-1927 Albanese proved sufficient conditions for a surface to be rational; he resolved the problem of the base for the curves on a surface and undertook a general study of the geometry of manifolds. This was in the years in which Albanese became professor of geometry at the University of Catania, going later to Palermo and then to Pisa.

In 1928 Albanese published a beautiful paper, where he presents some very interesting results on families of plane curves. In it, he gives necessary and sufficient conditions in order that a plane curve ... could be a specalization of an integral curve ...

The reason Albanese was sent to Brazil in 1936 was as part of the move to establish universities there. The University of São Paulo was founded in 1934 and professors were brought there from France, Italy (beginning with Luigi Fantappiè, a pupil of Volterra, in 1934) and Germany as well as some other European countries. Albanese spent the rest of his life in São Paulo, holding the chair of Analytical, Projective and Descriptive Geometry, except for the year 1942 when he returned to Pisa because of World War II. Soon after the war ended, Albanese, who was by then back in São Paulo, became closely acquainted with André Weil, who taught there from 1945 to 1947. He also became friends with Oscar Zariski who lectured in São Paulo in 1945. It is Weil who is responsible for the name 'Albanese variety', but Ciliberto and Sernesi [1] write:-

... the attribution of this concept to Albanese is dubious ....

Indeed the basis for this is an article where Albanese studies correspondences between algebraic surfaces through the consideration of the induced action on the space of holomorphic 1-forms.

Ciliberto and Sernesi write in [1] that in São Paulo, Albanese:-

... created a very good mathematical library, especially rich in books of algebraic geometry. A Weil and O Zariski taught in São Paulo some years later and said that the library was a source of inspiration to both of them.

Finally we quote from Marcelo Damy, who was a student at São Paulo University in the second half of the 1930s [3]:-

I had the chance to follow the course of ... geometry with Giacomo Albanese. We met a completely different world. In our education as future engineers, we still had the type of lectures so common in most of the Brazilian universities: the professor come in, delivers his lecture, and walks away, without talking with the students and often teaching from an obsolete book. ... It was a surprise for us when we attended [Albanese's] lectures that followed a completely different approach, that showed us these sciences were not only alive but going through such intense change that the amount of research published in the last few years had been greater than the amount since the beginning of these sciences. ... We also came in touch with something that was totally unknown in Brazil - the seminars. Each week the Italians ... would get together to present their research or the main lines of fundamental research being developed abroad. For us - young students used to listening without questioning - it was strange to hear a professor raise questions about and strongly criticize the work of a colleague.

Other Mathematicians born in Italy
A Poster of Giacomo Albanese

Other websites about Giacomo Albanese: