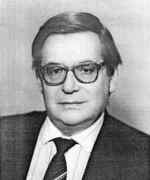 Dmitrii Viktorovich Anosov's parents were Viktor Yakovlevich Anosov and Nina
Konstantinovna Voskresenskaya. Both worked at the Institute of General and Inorganic Chemistry in Moscow. Dmitrii Viktorovich showed his abilities while at high school, entering the Physics Moscow Olympiad and the Mathematics Moscow Olympiad on several occasions. He achieved outstanding results, his highest ranking being second in each of the competitions. He entered the Faculty of Mechanics and Mathematics at Moscow State University in 1953 and there he was taught by outstanding teachers including Lev Semenovich Pontryagin, E F Mishchenko and M M Postnikov. He graduated in 1958 and then undertook research for three years at the Mathematical Institute of the USSR Academy of Sciences. His work was supervised by Pontryagin and during this period Anosov published a number of papers including: On stability of equilibrium states of relay systems (Russian) (1959); Averaging in systems of ordinary differential equations with rapidly oscillating solutions (Russian) (1960); and Limit cycles of systems of differential equations with small parameters in the highest derivatives (Russian) (1960). Anosov defended his thesis on averaging in systems of ordinary differential equations at Moscow University in 1961.

An event happened in 1961 which changed the direction of Anosov's research. He was influenced by Stephen Smale who was an invited speaker at the Symposium on non-linear oscillations at Kiev in 1961. In [1] Anosov speaks of a moment when:-

... the world turned upside down for me, and a new life began [having read Smale's announcement of] a structurally stable homeomorphism with an infinite number of periodic points,

while he was standing in a queue to register for the Kiev conference. The authors of [7] also explain the background to this event:-

Back in 1961 there was an unexpected breakthrough in the theory of dynamical systems, when Stephen Smale constructed a structurally stable dynamical system given by a diffeomorphism of the two-dimensional sphere and possessing an infinite set of periodic points. This discovery (the so-called 'Smale horseshoe') opened completely new aspects in the problem of describing the structurally stable systems that appeared in the classical work of A A Andronov and L S Pontryagin (1937). At the same time, Smale met with a group of young Soviet mathematicians, among them Dmitrii Anosov, a student of Pontryagin, and mentioned some difficult unsolved problems, in particular, the problem of structural stability of hyperbolic automorphisms of a torus and geodesic flows on closed manifolds of negative curvature. It should be noted that Anosov was already the author of several papers, of which one, on averaging in multi-frequency systems, is still highly regarded today. Nevertheless, he easily switched his interests to Smale's problems, and in a year he had solved them as particular cases in his investigation of the U-systems he introduced, now called Anosov systems. Smale's discovery and its development by Anosov marked the beginning of the 'hyperbolic revolution' in mathematics.

Anosov discovered a fundamental fact concerning the ergodic theory of smooth dynamical systems, namely the absolute continuity of transversal foliations. His results on hyperbolic flows formed the content of his doctoral thesis (equivalent to the German habilitation) which he defended in the Mathematical Institute of the USSR Academy of Sciences in 1965. The brilliance of his contributions led to him being awarded a 'Young Mathematician' prize by the Moscow Mathematical Society in 1965. He published a 200 page monograph Geodesic flows on closed Riemannian manifolds of negative curvature (Russian) in 1967 containing a detailed exposition and complete proofs of his results concerning U-systems that he had announced earlier. The American Mathematical Society published an English translation of this book in 1969.

In 1968 Anosov became a professor in the Department of Mechanics and Mathematics at Moscow State University where he taught for the rest of his career. He also worked at the Steklov Mathematical Institute of the Russian Academy of Sciences in Moscow. In the 1970s Anosov published papers such as Existence of smooth ergodic flows on smooth manifolds (Russian) (1974) and was an invited speaker at the International Congress of Mathematicians at Vancouver in 1974 when he gave the lecture Geodesics and Finsler geometry. His new approach to the problem of the existence of closed geodesies in Riemannian geometry led to him establishing important results in Some homotopies in a space of closed curves (Russian) (1980). In 1994 he published the monograph The Riemann-Hilbert problem written jointly with Andrei Andreevich Bolibrukh. V V Chueshev writes:-

Hilbert's 21st problem (the Riemann-Hilbert problem) belongs to the theory of linear systems of ordinary differential equations in the complex domain: does there exist a Fuchsian system having these singularities and monodromy? Hilbert was convinced that such a system always exists. But in 1989 Bolibrukh discovered a counterexample. The contemporary version of Hilbert's 21st problem is to find conditions implying a positive or negative solution to the Riemann-Hilbert problem. The authors consider only the classical Hilbert's 21st problem, but mention various modifications, generalizations and related problems, as well as all known results on the classical problem, both positive and negative, and prove some of the most important cases. The problem under consideration is of global character, but to study it one needs local theory, which goes back to Fuchs and Poincaré, and a new local theory due to Levelt.

In 2005, in collaboration with E V Zhuzhoma, Anosov published the monograph Nonlocal asymptotic behavior of curves and leaves of laminations on universal coverings which develops:-

Let us note that, in addition to his work on the analysis of manifolds, Anosov has written many historical and biographical articles. A look at his list of publications shows around 25 such articles. The authors of [7] also mention Anosov's work with young mathematicians:-

Anosov published a series of deep yet readable books (like detective novels) for high-school and college students. He finds time to work with people taking their 'first steps' in science. He not only gives talks at scientific conferences for young people, but also heads regional councils (for example, the Small Academy in Obninsk).

Anosov has received many honours for his achievements. For example he was awarded the State Prize in 1976 and was elected to the USSR Academy of Sciences in 1990. He was an invited lecturer at the International Congress of Mathematicians in Moscow in 1966, and again (as we mentioned above) at the Congress in Vancouver in 1974. He also has been involved with the International Congresses of Mathematicians in other capacities, being a member of the panel to decide the scientific programme in the section "Dynamical systems and differential equations" for three of the Congresses, and on two of these occasions he chaired the panel.

Let us end with the modest comment made by Anosov in [1]. He notes that his papers have not received a large number of citations and asks:-

Well then, am I famous in the mathematical world or not?

He then gives his own answer:-

... it became my best achievement in mathematics that I explained to Smale what his achievement amounted to.

Other websites about Dmitrii Viktorovich Anosov: