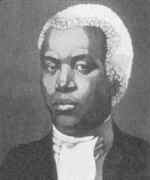 Benjamin Banneker's father, Robert, had been a slave who had been given his freedom and was a farmer, while his mother was Mary Banneky. Mary Banneky's mother had been an English girl, Molly Welsh who had been accused of stealing milk and condemned to death for this crime. Her sentence was then reduced to being sent to the British Colony in North America where she eventually became the owner of a farm and married one of her slaves. Their daughter Mary Banneky also married a former slave and he took her surname.

Benjamin received some education at the Quaker School although once he was old enough to help on his parent's farm then he had to end his formal education. He was taught to read and write by his grandmother Molly Welsh who also gave him instruction in the Bible. There was, however, little respite for Banneker from the hard physical labour on the farm.

When he was 22 years of age Banneker showed his abilities when he made a clock from wood using a pocket watch he had borrowed as a model. The clock struck the hours and continued in good working order for the rest of Banneker's life. Building this clock seems to have brought Banneker some fame in the local community in which he lived and he quickly acquired a reputation for skill in making and solving mathematical puzzles.

In 1772 a new family moved into the area in which Banneker's farm was situated. This was the Ellicot family, and George Ellicot became friendly with Banneker over the years as they shared interests in science. In 1788 Ellicot lent Banneker some astronomy books and instruments. At the age of 57 when many people look forward to retiring and without any help [3]:-

... and only a few semesters of elementary schooling in his childhood, Banneker taught himself the algebra, geometry, logarithms, trigonometry, and astronomy needed to become an astronomer. He also learned on his own how to use a compass, sector, and other instruments to make astronomical predictions, including that of eclipses.

In 1791 a survey was carried out for the new capital at Washington DC. One of those involved was a surveyor Andrew Ellicot who, through family connections, knew of Banneker. He employed Banneker as his assistant on this project. Banneker was also working on another project in 1791, namely constructing an astronomical almanac. He wrote to Thomas Jefferson, then Secretary of State, on 19 August 1791 sending him a manuscript of his Almanac. He also explained to Jefferson in the covering letter that he (see for example [3]):-

... had long unbounded desires to become acquainted with the secrets of nature. I have had to gratify my curiosity herein through my own assiduous application to astronomical study, in which I need not recount to you the many difficulties and disadvantages which I have had to encounter.

His letter makes a strong plea against slavery and Jefferson replied that he wished to see the position of black people improved. Although strongly opposed to slavery, Jefferson also believed that, because of racial and intellectual differences, black and white people could not live together peacefully. This attitude may well explain why Jefferson wrote after Banneker's death:-

I have a long letter from Banneker, which shows him to have had a mind of very common stature indeed.

The letter from Banneker most certainly does not suggest that at all, rather it suggests quite the reverse, namely that to have achieved what he did with all the difficulties which were in his way, he must have had a mind of quite remarkable stature.

Jefferson promised Banneker in his reply to the 19 August 1791 letter that he would send his Almanac to Condorcet at the Académie des Sciences in Paris. A copy of Jefferson's letter to Condorcet is in the Library of Congress.

Banneker published Almanacs until 1797. He dedicated them to the cause of equality and peace and the 1793 Almanac contains the correspondence between Banneker and Jefferson. In [1] Bedini claims that this 1793 Almanac was:-

... one of the most important publications of its time [presenting] tangible proof of the mental equality of the races.

When he became too old to work on the farm, Banneker sold it to the Ellicot family on condition that he was allowed to live in the farm house for the rest of his days. He spent his last days alone in the farmhouse studying and continuing to carry out scientific experiments. On the day of Banneker's funeral the farm house burnt to the ground and his laboratory and the clock he made in his younger days was all destroyed. Only one manuscript journal which Banneker had written was not in the house and so survived. Every other record of his achievements, except the published Almanacs, were lost in this (probably deliberate) fire.

The surviving manuscript journal contains mathematical puzzles and their solutions. To give just one example:-

Other websites about Benjamin Banneker: