Born
31 March 1730
Nemours, France
Died
27 September 1783
Basses-Loges (near Fontainbleau), France
Summary
Étienne Bézout was a French mathematician who is best known for his theorem on the number of solutions of polynomial equations. 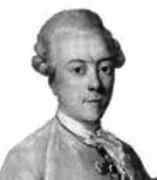 Étienne Bézout's father was Pierre Bézout who was a magistrate in the town of Nemours. One might have expected Étienne to follow the same career, for his grandfather had also been a magistrate in Nemours. Étienne's mother was Hélène-Jeanne Filz.

As we have already indicated the family tradition almost demanded that Étienne follow in his father and grandfather's footsteps. However the remarkable mathematics of Leonard Euler proved stronger than his parents wishes, for once Bézout had read Euler's works he wished to devote himself to mathematics. In 1756 he published a memoir Dynamique. In the following year he published Quantités différentielles and in 1758 Rectification des courbes. These latter two papers were investigations of integration.

In 1758 Bézout was appointed an adjoint in mechanics of the Académie des Sciences and, in the same year, as royal censor. He was appointed examiner of the Gardes de la Marine in 1763, the post being offered to him by the Duke of Choiseul. One important task that he was given in this role was to compose a textbook specially designed for teaching mathematics to the students.

Bézout is famed for the texbooks which came out of this assignment. The first was Cours de mathématiques à l'usage des Gardes du Pavillon et de la Marine Ⓣ, a four volume work which appeared in 1764-67.

In 1768 Camus, who was the examiner for the artillery, died. Bézout was appointed to succeed him becoming examiner of the Corps d'Artillerie. He began work on another mathematics textbook and as a result he produced Cours complet de mathématiques à l'usage de la marine et de l'artillerie Ⓣ, a six volume work which appeared between 1770 and 1782. This was a very successful textbook and for many years it was the book which students hoping to enter the École Polytechnique studied. Grabiner writes in [1]:-

The experience of teaching non-mathematicians shaped the style of the works: Bézout treated geometry before algebra, observing that beginners were not yet familiar enough with mathematical reasoning to understand the force of algebraic demonstrations, although they did appreciate proofs in geometry. He eschewed the frightening terms "axiom", "theorem", "scholium", and tried to avoid arguments that were too close and detailed.

As might be expected given this approach aimong at the readership for whom Bézout intended his texts, his books came in for a certain amount of criticism for lacking rigour. However, despite this they were books which could be understood by those who needed to use mathematics and as a result were very popular and widely used. Their use spread beyond France for they were translated into English and used in North America. In particular Harvard University adopted them as calculus textbooks.

Returning to give more information about Bézout's career, we should note that he was promoted to associé in mechanics at the Académie des Sciences in 1768 and then further promoted to pensionnaire in 1770.

As we have indicated Bézout is famed for being a writer of textbooks but he is famed also for his work on algebra, in particular on equations. He was much occupied with his teaching duties after his 1763 appointments and he took these very seriously indeed. As a consequence he could devote relatively little time to research and he made a conscience decision to restrict the range of his work so that he could produce worthwhile results in a narrow order.

The way Bézout went about his research is interesting since still today it is a good approach for obtaining results. He attacked quite general problems, but since an attack was usually beyond what could be achieved with the mathematical knowledge then available, he attacked special cases of the general problems which he could solve. This approach often leads slowly to more and more understanding of the general case which may eventually become soluble. Bézout had a name for this approach to mathematics, namely the "method of simplifying assumptions".

His first paper on the theory of equations Sur plusieurs classes d'équations de tous les degrés qui admettent une solution algébrique Ⓣ examined how a single equation in a single unknown could be attacked by writing it as two equations in two unknowns. He wrote in this paper:-

It is known that a determinate equation can always be viewed as the result of two equations in two unknowns, when one of the unknowns is eliminated.

Of course on the face of it this does not help solve the equation but Bézout made the simplifying assumption that one of the two equations was of a particularly simple form. For example he considered the case when one of the two equations had only two terms, the term of degree n and a constant term. Already this paper had introduced the topic to which Bézout would make his most important contributions, namely methods of elimination to produce from a set of simultaneous equations, a single resultant equation in one of the unknowns.

He also did important work on the use of determinants in solving equations. This appears in a paper Sur le degré des équations résultantes de l'évanouissement des inconnues Ⓣ which he published in 1764. As a result of the ideas in this paper for solving systems of simultaneous equations, Sylvester, in 1853, called the determinant of the matrix of coefficients of the equations the Bézoutiant.

These and further papers published by Bézout in the theory of equations were gathered together in Théorie générale des équations algébraiques Ⓣ which was published in 1779. This work includes a result known as Bézout's theorem:-

The degree of the final equation resulting from any number of complete equations in the same number of unknowns, and of any degrees, is equal to the product of the degrees of the equations.

By a complete equation Bézout meant one defined by a polynomial which contains terms of all possible products of the unknowns whose degree does not exceed that of the polynomial. One has to understand the problems that faced Bézout for he did not have our simple suffix notation to denote the unknowns by x1​,x2​,x3​,... nor could he even label his equations with a suffix notation. Despite this Bézout, who was prepared to enter long and difficult algebraic manipulations, proved his theorem with just a little hand waving over an inductive argument.

In this work Bézout also gave the first satisfactory proof of a result of Maclaurin on the intersection of two algebraic curves.

[Bézout] married early and happily; although he was reserved and somewhat sombre in society, those who knew him spoke of his great kindness and warm heart. By [1763] Bézout had become a father ...

After his death in 1783 a statue was erected in Nemours, the town of his birth, to commemorate his great achievements.
Other Mathematicians born in France
A Poster of Étienne Bézout

Other websites about Étienne Bézout: