Mathematicians with Paris streets named after them 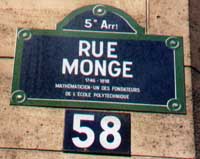 There are nearly 100 Parisian streets, squares, boulevards etc. named after mathematicians in our archive.

A location map for these streets is at THIS LINK.

Mostly, of course, they are French but there are some others too. For example, there is a place on the Avenue Marceau about 300 metres from the Arc de Triomphe where streets named after Newton, Galileo and Euler all come together.

Perhaps the most surprising fact is that there is no Paris street named after Fourier.
(The street on which he was born in Auxerre is now called after him as you can see at THIS LINK.)
A Walk around the the Latin Quarter of Paris is available at THIS LINK.

Click on the name below to go to the biography.