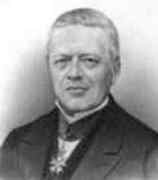 Antoine Cournot attended the secondary school Collège de Gray between the years 1809 and 1816. He showed an interest in politics at a young age and in a France deeply divided between royalists and republicans, he sided with the royalist cause in his youth. After leaving school he spent four years in a lawyer's office but after he had read Laplace and the correspondence between Leibniz and Clarke he decided to enter university.

A preliminary course in mathematics at Collège Royal in Besançon in session 1820-21 prepared him for entry to École Normale Supérieur in Paris which he entered in 1821. However his time there was disrupted when the École Normale Supérieur was closed down. Cournot remained in Paris and, along with his fellow student Dirichlet, was taught mathematics at the Sorbonne by Lacroix and Hachette.

In 1823 Cournot became a tutor but continued his work in mathematics receiving his doctorate in 1829 for a thesis Le mouvement d'un corps rigide soutenu par un plan fixe Ⓣ. Poisson was impressed with Cournot and, in 1833, he obtained a position for him with the Academy in Paris. During this time he translated John Herschel's Treatise on astronomy into French, it was published in 1834.

Again with Poisson's recommendation, Cournot was appointed to a newly created chair in analysis at Lyon in 1834. In [6] Cournot writes of Poisson's opinion of his first papers in mechanics:-

Poisson discovered in them a philosophical depth - and, I must honestly say, he was not altogether wrong. Furthermore, from then he predicted that I would go far in the field of pure mathematical speculation but (as I have always thought and have never hesitated to say) in this he was wrong.

He also considered conditions for equilibrium with monopoly, duopoly and perfect competition. He considered the effect of taxes, treated as changes in production costs, and discussed problems of international trade. He gives a definition of a market which is the basis for that still used in economics:-

Economists understand by the term Market, not any particular market place in which things are bought and sold, but the whole of any region in which buyers and sellers are in such free intercourse with one another that the prices of the same goods tend to equality easily and quickly.

This work makes Cournot a pioneer of mathematical economics, 25 years before Jevons.

Cournot also worked on probability and although his investigations into a logical foundation for it were unsuccessful, his work did lead the way to future important developments. He, as Poisson and Condorcet did, applied probability to legal statistics.

Cournot also well known for his views on scientific knowledge. He wrote:-

... scientific knowledge is the sign of great achievement and alone is truly capable of cumulative and indefinitely pursued progress.

Other websites about Antoine Cournot: