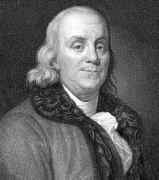 Benjamin Franklin was born in Boston, but spent most of his life in Philadelphia (punctuated by residences in London and Passy, France). His formal education lasted less than two years, and so he was mainly self-educated, aided by the convenient access to books provided by an apprenticeship in the printing business.

Franklin is best known in the popular imagination for his nonscientific pursuits: printer, American revolutionary, ambassador, to mention only a few roles he played. His scientific reputation rests mainly on his accomplishments as an inventor and as a pioneering theorist in the physics of electricity, but his interests were also mathematical. His version of magic square - a variant now termed the Franklin magic square - was inspired by the work of Stifel and Frénicle, both of whose magic squares were of a more traditional variety. He also drew magic circles.

His first published magic square and his only published magic circle appeared in a 1767 book which also included unrelated excerpts from work by Thomas Simpson. Two years later, Franklin published this square:

Aside from the row and column sums being constant, this square also has many other "magical" properties. Further examples of Franklin's magic squares would not be published until two centuries after his death, and doubtless many more were lost. Those which do survive are quite impressive.

Franklin enjoyed close personal and professional relationships with quite a few of the important thinkers of his day, such as Hume, Priestley, Lavoisier and Condorcet. He was a member of the learned societies of many nations. Among these were the Royal Society, which awarded him its prestigious Copley medal for his work in electricity, and the American Philosophical Society, of which he was a founder. He received several honorary degrees, including a doctorate from St. Andrews.
Quotations by Benjamin Franklin
Other Mathematicians born in USA
A Poster of Benjamin Franklin

Other pages about Benjamin Franklin:

Other websites about Benjamin Franklin: