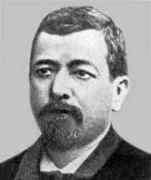 Félix Tisserand studied at the École Normale. In his doctoral thesis, written in 1868, Tisserand extended Delaunay's work on the three-body problem on the orbit of the Moon. This work was an outstanding contribution to mathematical astronomy coming quickly after the publication of the second volume of Delaunay's work on lunar theory La Théorie du mouvement de la lune Ⓣ which had been published in 1867. Tisserand was then appointed as an assistant-astronomer at the Paris Observatory.

This was an unfortunate time at the Paris Observatory since its Director Le Verrier had become very unpopular following his drive for efficiency and attempts were being made to have him removed. In 1870 Delaunay was appointed as Director of the Paris Observatory to replace Le Verrier. Tisserand showed remarkable abilities in his work at the Observatory and it was clear that he would soon achieve an elevated position in the world of astronomy. In 1873 Tisserand was appointed director of the Toulouse Observatory to succeed Daguin, a post which he held for five years.

At the Toulouse Observatory Tisserand appointed two young astronomers, Joseph Perrotin and Guillaume Bigourdan, to help him in his observational work. Neither were experienced in astronomy but Tisserand had made two good choices for he soon trained the young men to become astronomers of outstanding qualities.

Tisserand did not spend the whole of his five years as director in Toulouse. In 1874 he went to Japan to make observations of the transit of Venus which occurred that year. A transit of Venus is when the planet passed in front of the disc of the sun as viewed from the Earth and Tisserand took a year to make the journey to Japan, make his observations, and return to France. In order to keep the Toulouse Observatory operating during this lengthy absence Jules Gruey, a teacher at the Toulouse Faculty of Science was appointed temporary director. The experience stood Gruey in good stead for he went on to became the director of the Besançon Observatory.

After Tisserand returned to France and took over again as director of the Observatory in Toulouse he had a new instrument installed. However the 83 centimetre telescope installed in 1875 was not a great success since the wooden base was not stable enough to allow photography. Having a telescope which could not be used for photography was rather unfortunate since most astronomical work at that time required that facility. Tisserand decided to undertake a programme of measurement of the separation of binary stars, but he discovered that the micrometer used for such measurements did not work. He decided that he could only use the defective telescope for observing the planets and together with his assistants he made observations of the moons of Jupiter and Saturn.

From 1892 until his death he was director of the Paris Observatory. When he arrived to take up the post of director work was being undertaken at the Observatory on the Catalogue photographique de la carte du ciel (the Photographic Catalogue of the Map of the Sky). Tisserand took over the task of completing this major work and arranged for its publication.

Tisserand is especially remembered for his four volume textbook which is an update of Laplace's work. He published Traité de mécanique céleste Ⓣ, in four volumes which appeared between the years 1889 and 1896. Despite being 100 years old this textbook is still sometimes referred to by current writers of celestial mechanics books.

In 1874 he was elected to the Academy of Sciences as a corresponding member and was elevated to full membership in 1878.
Other Mathematicians born in France
A Poster of Félix Tisserand

Other websites about Félix Tisserand: