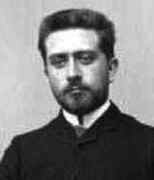 In 1885 he joined the Corps de Ponts et Chaussées, moving to Cherbourg where he worked for several years on the construction of waterworks. However, he continued to publish many articles on a variety of mathematical topics. As an example we mention Intégration d'une suite récurrente qui se présente dans une question de probabilité Ⓣ; Sur une notation utile en algèbre et en analyse Ⓣ; and Sur Une Classe de Nombres Remarquables Ⓣ which are just three of the papers he published in 1887. In 1893 he became répétiteur at the École Polytechnique, then in the following year he was appointed professor at the École Nationale des Ponts et Chaussées. In 1891 he began publishing papers on nomography, the topic for which he is most remembered today. Itard explains in [1]:-

Nomography consists in the construction of graduated graphic tables, nomograms, or charts, representing formulas or equations to be solved, the solutions of which were provided by inspection of the tables.

In 1899 d'Ocagne published Traité de Nomographie Ⓣ. He writes in the Introduction:-

The purpose of Nomography is to reduce to simple readings on graphical charts, constructed once for all, the computations which necessarily intervene in the practice of various technical arts. If one makes a system of geometric elements (points or lines) correspond to each of the variables connected by a certain equation, the elements of each system being numbered in terms of the values of the corresponding variable, and if the relationship between the variables established by the equation may be translated geometrically into terms of a certain relation of position, easy to set up between the corresponding geometric elements, then the set of elements constitutes a chart of the equation considered. This is the theory of charts, that is to say the graphical representation of mathematical laws defined by equations in any number of variables, which is understood today under the name Nomography.

This work is an expansion of the course in pure geometry given by the author at the École des Ponts et Chaussées. It proposes to give an exposition of all the geometrical notions which are of interest to engineers, the material not required in the course appearing in small print. As the title indicates, the construction of the book is unique. The author deems it necessary to separate completely that which has to do with the representation of geometrical bodies from that which treats of their intrinsic properties. Accordingly his course is divided into two parts represented in the work by the two distinct divisions: Géométrie descriptive and Géométrie infinitésimale. The author believes also that the exposition of general doctrines should precede that of the details of a subject and prefaces each chapter with a body of essential principles before examining any particular case; thus for example, in the theory of surfaces he presents an ensemble of general properties before studying surfaces of a special nature, such as the surfaces gauches; this is contrary to the custom prevailing in similar courses.

In 1901 d'Ocagne was appointed director of the French mapping service. In 1912 he was appointed professor of geometry at the École Polytechnique. Then in 1920 he became the general inspector of roads and bridges in France. On 30 January 1922 he was elected to the Académie des Sciences, having twice been awarded prizes by the Academy, once in 1892 (the Leconte prize) for his work on nomography and another in 1894 (the Dalmont prize), for all of his mathematical work to that date.

Let us mention that d'Ocagne also wrote literary works under the pseudonym Pierre Delix. His one-act comedy La Candidate Ⓣ was performed at the Theatre Cluny in Paris for over a hundred performances.

The Edinburgh Mathematical Society held a Colloquium in 1914 following a highly successful colloquium in the previous year. D'Ocagne was one of the three invited lecturers, giving two lectures on Nomography. In The Mathematical Gazette in May 1914, an advertisement appeared for the colloquium and it gave the following description of d'Ocagne's course:-

It is now generally recognised that for most purposes the nomographic methods are superior to the older graphical methods of calculation. The introduction of some nomographic teaching in British Universities (and schools, for much of it is not too hard for schoolboys) is much to be desired.

Other Mathematicians born in France
A Poster of Maurice d'Ocagne

Other pages about Maurice d'Ocagne:

Other websites about Maurice d'Ocagne: