Born
6 January 1655
Basel, Switzerland
Died
16 August 1705
Basel, Switzerland
Summary
Jacob Bernoulli was a Swiss mathematician who was the first to use the term integral. He studied the catenary, the curve of a suspended string. He was an early user of polar coordinates and discovered the isochrone. 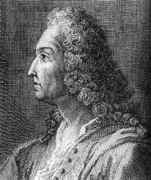 Jacob Bernoulli's father, Nicolaus Bernoulli (1623-1708) inherited the spice business in Basel that had been set up by his own father, first in Amsterdam and then in Basel. The family, of Belgium origin, were refugees fleeing from persecution by the Spanish rulers of the Netherlands. Philip, the King of Spain, had sent the Duke of Alba to the Netherlands in 1567 with a large army to punish those opposed to Spanish rule, to enforce adherence to Roman Catholicism, and to re-establish Philip's authority. Alba set up the Council of Troubles which was a court that condemned over 12000 people but most, like the Bernoulli family who were of the Protestant faith, fled the country.

Nicolaus Bernoulli was an important citizen of Basel, being a member of the town council and a magistrate. Jacob Bernoulli's mother also came from an important Basel family of bankers and local councillors. Jacob Bernoulli was the brother of Johann Bernoulli and the uncle of Daniel Bernoulli. He was compelled to study philosophy and theology by his parents, which he greatly resented, and he graduated from the University of Basel with a master's degree in philosophy in 1671 and a licentiate in theology in 1676.

In 1676, after taking his theology degree, Bernoulli moved to Geneva where he worked as a tutor. He then travelled to France spending two years studying with the followers of Descartes who were led at this time by Malebranche. In 1681 Bernoulli travelled to the Netherlands where he met many mathematicians including Hudde. Continuing his studies with the leading mathematicians and scientists of Europe he went to England where, among others, he met Boyle and Hooke. At this time he was deeply interested in astronomy and produced a work giving an incorrect theory of comets. As a result of his travels, Bernoulli began a correspondence with many mathematicians which he carried on over many years.

Jacob Bernoulli returned to Switzerland and taught mechanics at the University in Basel from 1683, giving a series of important lectures on the mechanics of solids and liquids. Since his degree was in theology it would have been natural for him to turn to the Church, but although he was offered an appointment in the Church he turned it down. Bernoulli's real love was for mathematics and theoretical physics and it was in these topics that he taught and researched. During this period he studied the leading mathematical works of his time including Descartes' Géométrie and van Schooten's additional material in the Latin edition. Jacob Bernoulli also studied the work of Wallis and Barrow and through these he became interested in infinitesimal geometry. Jacob began publishing in the journal Acta Eruditorum which was established in Leipzig in 1682.

In 1684 Jacob Bernoulli married Judith Stupanus. They were to have two children, a son who was given his grandfather's name of Nicolaus and a daughter. These children, unlike many members of the Bernoulli family, did not go on to become mathematicians or physicists.

One of the most significant events concerning the mathematical studies of Jacob Bernoulli occurred when his younger brother, Johann Bernoulli, began to work on mathematical topics. Johann was told by his father to study medicine but while he was studying that topic he asked his brother Jacob to teach him mathematics. Jacob Bernoulli was appointed professor of mathematics in Basel in 1687 and the two brothers began to study the calculus as presented by Leibniz in his 1684 paper on the differential calculus in Nova Methodus pro Maximis et Minimis, itemque Tangentibus... published in Acta Eruditorum. They also studied the publications of von Tschirnhaus. It must be understood that Leibniz's publications on the calculus were very obscure to mathematicians of that time and the Bernoullis were the first to try to understand and apply Leibniz's theories.

Although Jacob and Johann both worked on similar problems their relationship was soon to change from one of collaborators to one of rivals. Johann Bernoulli's boasts were the first cause of Jacob's attacks on him and Jacob wrote that Johann was his pupil whose only achievements were to repeat what his teacher had taught him. Of course this was a grossly unfair statement. Jacob continued to attack his brother in print in a disgraceful and unnecessary fashion, particularly after 1697. However he did not reserve public criticism for his brother. He was critical of the university authorities at Basel and again he was very public in making critical statements that, as one would expect, left him in a difficult situation at the university. Jacob probably felt that Johann was the more powerful mathematician of the two and, this hurt since Jacob's nature meant that he always had to feel that he was winning praise from all sides. Hofmann writes in [1]:-

Sensitivity, irritability, a mutual passion for criticism, and an exaggerated need for recognition alienated the brothers, of whom Jacob had the slower but deeper intellect.

As suggested by this quote the brothers were equally at fault in their quarrel. Johann would have liked the chair of mathematics at Basel which Jacob held and he certainly resented having to move to Holland in 1695. This was another factor in the complete breakdown of relations in 1697.

Of course the dispute between the brothers over who could obtain the greatest recognition was a particularly stupid one in the sense that both made contributions to mathematics of the very greatest importance. Whether the rivalry spurred them on to greater things or whether they might have achieved more had they continued their initial collaboration, it is impossible to say. We shall now examine some of the major contributions made by Jacob Bernoulli at an important stage in the development of mathematics following Leibniz's work on the calculus.

Jacob Bernoulli's first important contributions were a pamphlet on the parallels of logic and algebra published in 1685, work on probability in 1685 and geometry in 1687. His geometry result gave a construction to divide any triangle into four equal parts with two perpendicular lines.

By 1689 he had published important work on infinite series and published his law of large numbers in probability theory. The interpretation of probability as relative-frequency says that if an experiment is repeated a large number of times then the relative frequency with which an event occurs equals the probability of the event. The law of large numbers is a mathematical interpretation of this result. Jacob Bernoulli published five treatises on infinite series between 1682 and 1704. The first two of these contained many results, such as fundamental result that ∑(1/n) diverges, which Bernoulli believed were new but they had actually been proved by Mengoli 40 years earlier. Bernoulli could not find a closed form for ∑(1/n2) but he did show that it converged to a finite limit less than 2. Euler was the first to find the sum of this series in 1737. Bernoulli also studied the exponential series which came out of examining compound interest.

In May 1690 in a paper published in Acta Eruditorum, Jacob Bernoulli showed that the problem of determining the isochrone is equivalent to solving a first-order nonlinear differential equation. The isochrone, or curve of constant descent, is the curve along which a particle will descend under gravity from any point to the bottom in exactly the same time, no matter what the starting point. It had been studied by Huygens in 1687 and Leibniz in 1689. After finding the differential equation, Bernoulli then solved it by what we now call separation of variables. Jacob Bernoulli's paper of 1690 is important for the history of calculus, since the term integral appears for the first time with its integration meaning. In 1696 Bernoulli solved the equation, now called "the Bernoulli equation",
y′=p(x)y+q(x)yn
and Hofmann describes this part of his work as:-

... proof of Bernoulli's careful and critical work on older as well as on contemporary contributions to infinitesimal mathematics and of his perseverance and analytical ability in dealing with special pertinent problems, even those of a mechanical-dynamic nature.

Jacob Bernoulli also discovered a general method to determine evolutes of a curve as the envelope of its circles of curvature. He also investigated caustic curves and in particular he studied these associated curves of the parabola, the logarithmic spiral and epicycloids around 1692. The lemniscate of Bernoulli was first conceived by Jacob Bernoulli in 1694. In 1695 he investigated the drawbridge problem which seeks the curve required so that a weight sliding along the cable always keeps the drawbridge balanced.

Jacob Bernoulli's most original work was Ars Conjectandi published in Basel in 1713, eight years after his death. The work was incomplete at the time of his death but it is still a work of the greatest significance in the theory of probability. In the book Bernoulli reviewed work of others on probability, in particular work by van Schooten, Leibniz, and Prestet. The Bernoulli numbers appear in the book in a discussion of the exponential series. Many examples are given on how much one would expect to win playing various game of chance. There are interesting thoughts on what probability really is [1]:-

... probability as a measurable degree of certainty; necessity and chance; moral versus mathematical expectation; a priori an a posteriori probability; expectation of winning when players are divided according to dexterity; regard of all available arguments, their valuation, and their calculable evaluation; law of large numbers ...

In [1] Hofmann sums up Jacob Bernoulli's contributions as follows:-

Bernoulli greatly advanced algebra, the infinitesimal calculus, the calculus of variations, mechanics, the theory of series, and the theory of probability. He was self-willed, obstinate, aggressive, vindictive, beset by feelings of inferiority, and yet firmly convinced of his own abilities. With these characteristics, he necessarily had to collide with his similarly disposed brother. He nevertheless exerted the most lasting influence on the latter.

Bernoulli was one of the most significant promoters of the formal methods of higher analysis. Astuteness and elegance are seldom found in his method of presentation and expression, but there is a maximum of integrity.

Jacob Bernoulli continued to hold the chair of mathematics at Basel until his death in 1705 when the chair was filled by his brother Johann. Jacob had always found the properties of the logarithmic spiral to be almost magical and he had requested that it be carved on his tombstone with the Latin inscription Eadem Mutata Resurgo meaning "I shall arise the same though changed".
Quotations by Jacob Bernoulli
Other Mathematicians born in Switzerland
A Poster of Jacob Bernoulli

Other pages about Jacob Bernoulli:

Other websites about Jacob Bernoulli: